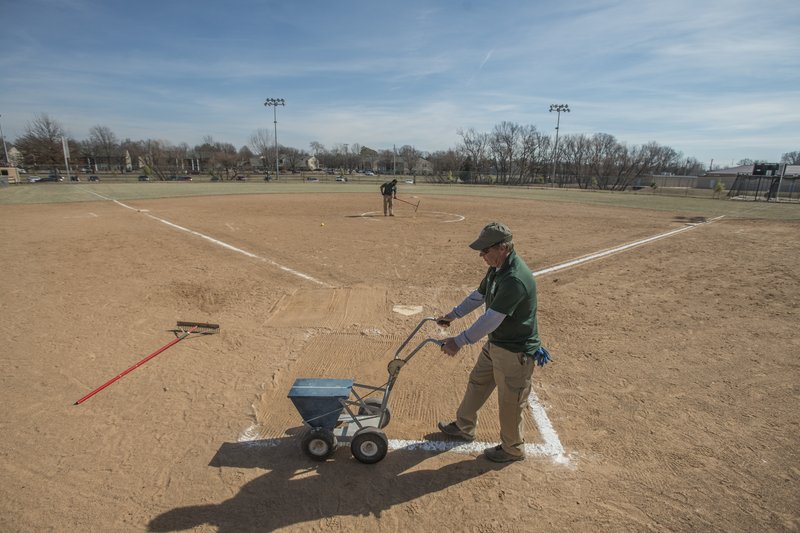 NWA Democrat-Gazette/ANTHONY REYES Bobby Hinton, with the Bentonville Parks and Recreation department, lays chalk lines Friday, Feb. 10, 2017 at the softball fields at Memorial Park in Bentonville. Visiting Bentonville will improve the fields at the park and add artificial turf infields.

BENTONVILLE -- Visiting Bentonville is shifting money around so it can upgrade the softball and baseball fields at Memorial Park to tournament-quality with artificial turf infields.

The idea is for work to start on the four softball fields by Nov. 1 and have them completed by mid-February, officials said. Work on the five baseball fields will start in the fall of 2018 and be completed by spring 2019. The projects have estimated costs of $694,000 and $867,00 respectively.

"We need these from a resident standpoint and visitor standpoint," David Wright, Parks and Recreation director, told Advertising and Promotions commissioners Thursday.

Turf will help protect the fields from overuse and ensure games can be played in wet weather. The city lost four softball tournaments this year because of rain, Wright said. Those games could have been played on turf fields, but would have caused too much damage on natural fields.

Visit Bentonville operates on a 2 percent hotel and motel tax and 1 percent tax on food and beverages governed by the commission. Part of the organization's budget -- $826,334 this year -- goes to help pay for Parks and Recreation development, public art, events and Bike Bentonville.

The commission agreed to move some money around and reprioritize projects to improve the fields at Memorial Park.

The Parks and Recreation Department has a balance of $144,000 from Advertising and Promotions money. Commissioners agreed to pay for the softball field project with $343,093 it's been stowing away for a bike park and $244,000 it allocated in this year's budget to help with the Phillips Park renovation.

Wright requested the reallocation of money after he presented the Play Bentonville Plan, which will guide the park system growth. The City Council approved the plan Tuesday.

The plan doesn't mention a bike park because it wasn't an amenity residents asked, Wright said, adding the renovation of Phillips Park has been pushed back.

"We have the money," Chairman Chris Sooter said in favor of shifting dollars. "We have a short window to get it done in time."

It'll be a 60-day construction project, but there will be 90 days to do it in, Wright said.

Commissioner Josh Morey asked if there was potential to lose tournaments because of turf fields.

Tournament organizers and teams' loyalty to a city wanes if events are cancelled, Wright said. Turf fields will help prevent that.