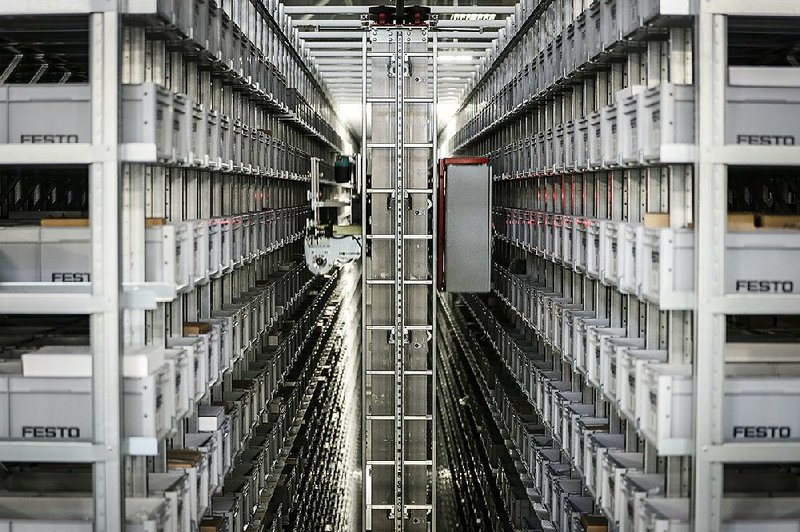 A robotic conveyor uses laser guides to sort through materials storage at Festo’s distribution facility in Mason, Ohio, in May.

NORWOOD, Ohio -- Herbie Mays is 3M proud, and it shows -- in the 3M shirt he wears; in the 3M ring he earned after three decades at the company's plant in suburban Cincinnati; in the way he shows off a card from a 3M supervisor, praising Mays as "a GREAT employee." 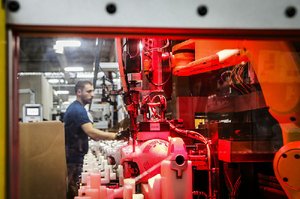 Photo by AP/JOHN MINCHILLO
A worker and a collaborative robot work in May on an assembly line making chainsaws at the Stihl Inc. manufacturing facility in Virginia Beach, Va.

But it's all nostalgia.

Mays' last day at 3M was in March. Bent on cutting costs and refocusing its portfolio, the company decided to close the plant that made bandages, knee braces and other health care supplies and move work to its plant in Mexico.

At 62, Mays is unemployed and wants to work, though on the face of it he has plenty of opportunities: Barely 10 miles from Mays' ranch-style brick home in this blue-collar city, GE Aviation has been expanding -- and hiring.

In the state-of-the-art laboratory in a World War II-era building the size of 27 football fields, workers use breakthrough technology to build jet engines that run on less fuel at higher temperatures. Bright flashes flare out as GE workers run tests with a robotic arm that can withstand 2,000 degrees.

The open jobs there are among 30,000 manufacturing positions open across Ohio. But Mays, like many of Ohio's unemployed, lacks the in-demand skills.

This is the paradox of American manufacturing jobs in 2017. Donald Trump won the presidency in great measure because he pledged to stop American jobs and manufacturing from going overseas, winning Rust Belt votes from Mays and other blue-collar voters.

It's true that many jobs have gone overseas, to lower-wage workers.

But at the same time, American manufacturers have actually added nearly a million jobs in the past seven years. Labor statistics show nearly 390,000 such jobs open.

The problem? Many of these are not the same jobs that for decades sustained the working class. More factory jobs now demand education, technical know-how or specialized skills. And many of the workers set adrift from low-tech factories lack such qualifications.

Factories will need to fill two million jobs over the next decade, according to a forecast by Deloitte Consulting and the American Manufacturing Institute. Workers are needed to run, operate and troubleshoot computer-directed machinery, including robots, and to maintain complex websites

Last year, software developer was the second-most-common job advertised by manufacturing companies, behind only sales, according to data provided by Burning Glass Technologies, a company that analyzes labor market data.

Yet the United States for now remains a follower, not a leader, of the trend. Workers in many European and Asian countries are more likely to be working with robots than U.S. workers, studies show. In countries such as Japan and Denmark, robotics and advanced automation have created solid jobs while increasing efficiencies for manufacturers.

Trump continues to make promises about adding U.S. manufacturing jobs. In blue-collar Youngstown, Ohio, he talked about passing by big factories whose jobs "have left Ohio" on his way to a July 25 rally, then told people not to sell their homes because the jobs are "coming back. They're all coming back."

But Sen. Rob Portman, an Ohio Republican and a former U.S. trade representative, conceded in an interview: "We're not going to see the kind of manufacturing renaissance that we all want in this country unless we focus on skills training."

Labor Secretary Alexander Acosta, in a visit to a Detroit factory in June, acknowledged the need to address the skills gap by developing advanced computing skills. And when Trump visited Pewaukee, Wis., in June, he touted the value of training while doing.

"Apprenticeships teach striving Americans the skills they need to operate incredible machines," Trump said. "This is not the old days. This is new and computerized and complicated."

Of the 146 million jobs in the United States, only about 0.35 percent were filled by active apprentices in 2016. Filling millions of open jobs through apprenticeships would require a substantial increase in government resources. So far, the Trump administration has called for more funding but hasn't made any progress securing the funding from Congress.

Apprenticeships are much more common at some European companies, notably German firms. At Germany-based Stihl Inc.'s plant in Virginia Beach, Va., for example, A.J. Scherman is learning to be a "mechatronics technician." Mechatronics combines electrical and mechanical engineering as well as computer skills.

Stihl makes chain saws, leaf blowers and weed trimmers at the factory. Once he's completed his final year in Stihl's four-year apprenticeship program, Scherman will read diagnostic software on computer screens attached to each robot to repair and upgrade them. If necessary, he'll hook up a laptop to program changes.

Scherman, 37, is also earning a college degree as part of the apprenticeship. Thanks to financial aid from Stihl, he'll finish with zero debt.

Skip Johnson, Stihl's apprenticeship coordinator, said it's critically important to bring bright students into the plant, where they can see that the grime and dust they associate with factories are giving way to clean operations using futuristic technology.

"They just come in here, and they're wide-eyed," Johnson said.

U.S. manufacturing workers, excluding managers, make an average of $44,000 a year, according to government data. That's just 2.8 percent higher, adjusted for inflation, than a decade ago after years of shifting of jobs overseas or to nonunion states. And it compares with a much higher 8 percent gain for the labor force as a whole over the past decade.

But a typical mechatronics engineer with a four-year degree can earn $97,000 a year; a typical software developer makes just over $100,000.

"This kind of factory has nothing to do with the factory we knew in the 1960s or 1980 or even 2000," said Yannick Schilly, who heads global supply for Festo's North American business.

But there's not much demand locally these days for the kind of repetitive tasks done in those factories by workers such as Mays.

He acknowledged that there are "plenty of jobs out here.

"What you have to do is get training or education."

Information for this article was contributed by Yuri Kageyama, Jan M. Olsen, Mike Householder and John Minchillo of The Associated Press.