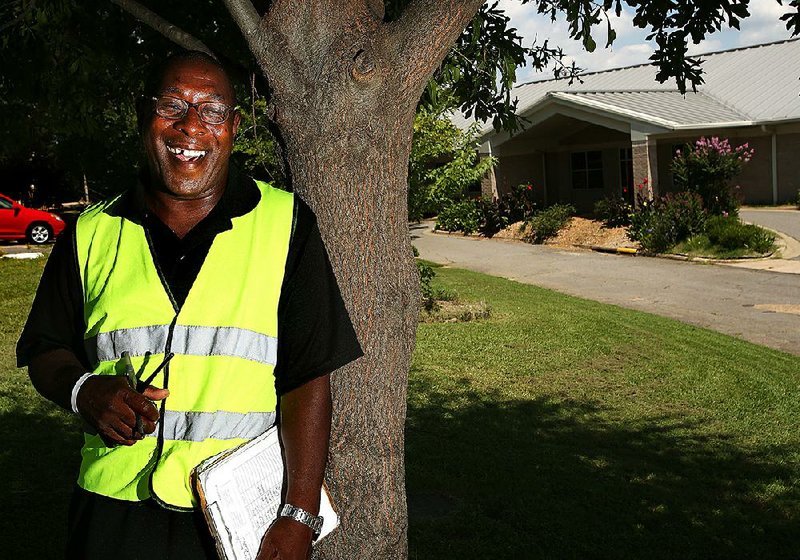 Kenny Hopson recently completed a six-month job training program at Our House in Little Rock after being released from prison. Going forward, Our House will be affiliated with the Rock City Reentry Project.

A new Little Rock program paid for with federal tax dollars will connect former prison inmates with construction, restaurant and other high-demand jobs -- and cover their minimum-wage paychecks for four months, officials said.

Mayor Mark Stodola has touted the $1.2 million Department of Labor grant as one way the capital city is addressing a surge in violence, in addition to ongoing efforts to fill Police Department vacancies, lobby for tighter state laws and better direct public assistance to dangerous neighborhoods.

Arkansas' recidivism rate is 53.3 percent, according to the state's probation and parole department, meaning more than half of ex-inmates return to prison within three years of their release. Stodola has said Pulaski County receives an "inordinate" number of parolees compared with the rest of Arkansas.

The Labor Department in late June awarded $72.8 million to 32 programs focused on helping prisoners re-enter society. Little Rock was the only Arkansas city to receive money, and it was one of four programs to receive the lowest amount awarded, along with peers in Oklahoma City, north Georgia and southeast Pennsylvania.

Stodola highlighted so-called re-entry programs as part of his July 20 news conference that laid out the city's short- and long-term plans to combat violence.

"Formerly incarcerated individuals face a number of barriers for re-entering society," Stodola said. "They include criminal background checks, strained family relationships, trouble finding housing, just to name a few. Because of these barriers, there's an increased potential for them to re-offend."

Little Rock, with 43 homicides this year, is on pace to have its deadliest year since 1993. The 1,653 reported cases of aggravated assault as of Aug. 7 represent a 30 percent increase from the same time last year, amid a 19 percent year-to-year increase in all violent incidents, according to Police Department data.

The Little Rock Workforce Development Board will coordinate the new three-year program, which will extend the agency's existing job-aid programs specifically to convicted criminals for the first time, Executive Director W.J. Monagle said.

Called the Rock City Reentry Project, the initiative joins similar services offered in Little Rock, including a 4-year-old City Hall program and others offered by social services groups Our House and Goodwill Industries.

Monagle expects the program to start before Nov. 1. It aims to enroll 150-175 people who have been released from prison within 180 days, who are 25 or older, and who live in high-poverty or high-crime neighborhoods, officials said.

Although he wasn't convicted of a violent crime, 57-year-old Kenny Hopson said the stain of a prison stay couldn't be scrubbed off. Potential employers could see it, and so could he.

Hopson, convicted of forgery, a felony, spent nearly four years in Arkansas prisons before his 2015 release.

He then returned to Hope, where his family owns property, and "did a little self-employment," such as cleaning a friend's rental houses after tenants were evicted or moved on. He applied for more stable jobs but didn't get them.

Hopson stopped checking in with his parole officer, he said. After a run-in with his family, he left for Little Rock, without a plan or a home, on the gamble that the state's largest city would provide the most opportunities.

He slept on the street and then in homeless shelters.

In February, he showed up to Our House -- where he still lives in a shelter -- and began six months of job-skills training at the agency's career center.

The center, which is open to the public, has a specific, city-funded course focused on helping people with criminal histories secure work. Participants take daily classes in employment training, education, finances and health and wellness, said Rachael Borne, who coordinates the program.

The program has served 710 people since 2013, and two-thirds secured employment, Borne said. Of 148 participants this year, 105 received full-time jobs and 79 percent of them maintained employment for at least 30 days, Borne said.

Hopson, who is close to getting a job at the University of Arkansas for Medical Sciences, Little Rock, pending a background check, would be among the latest.

Hopson passed a drug test last week, and Borne said she believes he will pass the background check even with the forgery conviction because it's been more than five years. Hopson disclosed the conviction when he applied.

"They really didn't ask me too much because when I did my application, I was honest about it," Hopson said. "I was convicted of forgery. I'm not proud of what I did, and I served my time."

Hopson credited the program for teaching him how to put together a resume and prepare for an interview. He said it gave him a daily routine and taught him how to handle "being turned down and rejected for being a convicted felon." He also participated in a job working in the Our House guard shack.

"I needed to build up my confidence again to go back out in society, to redefine my independence again," Hopson said.

Hopson said the full-time job at UAMS would pay him $13 per hour to stock medical supplies. He would put the first check in his savings account, which accrued nearly $1,000 during the six months he worked at Our House, he said.

Rock City Reentry will tie together existing job-aid programs like the one at Our House, direct them specifically at newly released inmates, and provide financial rewards to former prisoners and the companies that hire them.

The Little Rock Workforce Development Board will work with Our House and Goodwill -- as well as the University of Arkansas-Pulaski Technical College, AR Food Jobs and the Arkansas Construction Education Foundation -- to offer broad and industry-specific job training.

"Any client enrolled in the program will be able to get fast-track referral to services at those other sites," Borne said, calling it "extremely collaborative."

To encourage employers to hire ex-inmates, Rock City Reentry will pay wages for up to 16 weeks, Monagle said. This allows companies a feel for whom they're hiring, though it comes with limitations -- the grant can only cover minimum wage, or $8.50 an hour, for roughly 28 to 32 hours per week, he said.

Ex-inmates will also qualify for incentives -- which are still being developed -- for good attendance or obtaining a higher education level, such as a diploma equivalency, Monagle said.

Monagle, though, called skills training the "real meat" of the the program.

AR Food Jobs -- an online, subscription-based job board focused on restaurants and the hospitality industry -- will host a series of six-week classes that teach participants kitchen skills. Each class will be open to 12-15 people and includes exercises in food preparation, knife skills and a cooking competition.

"We have two huge problems," AR Food Jobs founder Christie Ison said. "[One is] people being underemployed because of a criminal background. The other problem, in food service, we've got a huge crisis of not having enough people."

Although construction and food service will represent specific parts of Rock City Reentry, the project is not limited to those fields. Our House, for instance, has placed people with 74 different employers this year, including Little Rock-based Interstate Signways, which makes highway signs for use across the country.

The success of re-entry programs also depends on employers being willing to take a chance on people with checkered backgrounds, said Borne, who described it as a "call to action."

"We'll need to find [more] employers who are on board," Borne said. "We are willing to work with anyone."