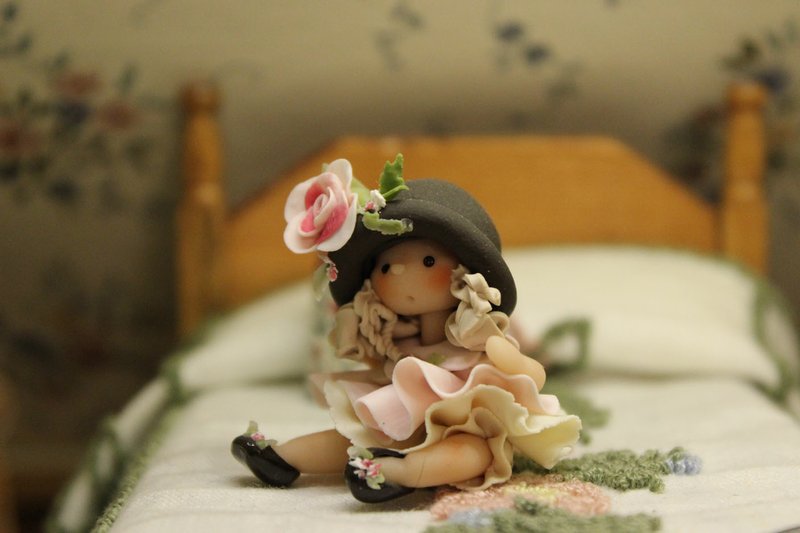 Joanne Martin has been creating and collecting miniature art for most of her life. Miniatures are the tiny, detailed furniture and decorative objects used to furnish dollhouses.

Stephanie Lewis is a Wonder Woman fan. Her office at Northwest Arkansas Community College, where she is the art coordinator, is filled with memorabilia of the Amazon princess -- much of it from the most recent movie, which Lewis says she's seen 10 times thus far. So it's no surprise the first documentary the artist has ever made has a wonder woman from her own family as its focus. 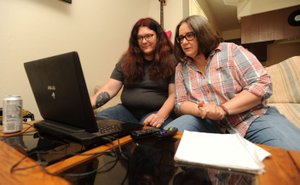 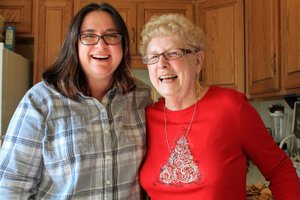 Photo by COURTESY PHOTO
Stephanie Lewis poses with her aunt, Joanne Martin, the focus of the documentary, A Life in Miniature. Martin, a life-long resident of St. Louis, has a passion for miniatures — the tiny, detailed furniture and decorative objects used to furnish dollhouses. 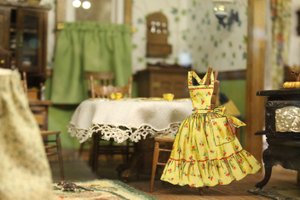 Photo by Courtesy photo
Martin’s love of miniatures led to the founding of the Miniature Museum of Greater St. Louis in 2001. The museum still welcomes visitors today.

"She is a free-wheeling maverick," Lewis said of her aunt, Joanne Martin, who is the subject of Joanne Martin -- A Life in Miniature, which Lewis recently completed with her film partner, Eris (who uses just that name). A lifelong resident of St. Louis, Martin was born in 1938, fought dyslexia before it had a name, raised two children, started her own business and opened the Miniature Museum of Greater St. Louis. "She's pretty strong-willed, like all of her clan is on that side.

More about this art

"My goal is to communicate that, here she is, a woman who grew up in a certain era, with dyslexia, with a not-ideal mother, and she still did what she wanted -- I mean, she got it done," Lewis said. "You really can't stop her. I wouldn't have wanted to get in her way."

Lewis said her aunt started a wedding business where she did it all: sewed the dress, arranged the flowers, baked the cake. A talented seamstress, she found a way around the limitations that her undiagnosed dyslexia imposed on her.

"I don't know that she set out to be an artist, she just is one," Lewis said. Martin's early passion for miniatures -- the tiny, detailed furniture and decorative objects used to furnish dollhouses -- led to her opening the Miniature Museum of Greater St. Louis when she was in her sixties.

Lewis realized her aunt would be a fascinating subject for a documentary when she brought her to Northwest Arkansas to speak to the NWAAC Art Club, for which Lewis is the faculty adviser. After consulting with Eris, a former Art Club member and graduate of the NWAAC graphic design department, the two decided to jump into the project two years ago this month. They traveled to St. Louis to spend a week filming Martin in her home and at the museum.

Both women brought a distinct skill set to the project. For example, Eris has nearly 20 years of experience in production.

"Fayetteville has the 'Community Access Television' station, and you can learn how to edit, how to shoot, how to storyboard stuff," she said. "They're a really good resource. I started taking classes in 1998. I'm pretty well-versed in editing."

Documentary film making, Eris said, did require a bit of a learning curve despite her extensive experience, including her involvement in the CAT cult classic The Abbey of the Lemur.

"The pacing is a little different; you develop excitement in different ways," she said.

Lewis, as a documentary fan, has studied all facets of the genre.

"My husband said, 'A lot of people go to film school and study how to make a documentary, but you've essentially done that by watching them all the time,'" Lewis said.

Lewis had a clear vision for the film and quickly found her footing after a false start.

"Well, you had strung it together, but we hadn't done any edits, thankfully," Lewis said. When Lewis viewed the initial order of the scenes, she realized it was straying from her initial vision. "I thought, 'What am I doing?' It's not [supposed to be] a linear documentary; it doesn't have a linear progression. It's not a documentary as much as a moving portrait.

"What's great about my aunt is that she is an open book. She's the one that blurts out fun family factoids at Thanksgiving. She knows everyone going all the way back and who all the pictures are of on the wall. She's the family historian, with a mind like a steel trap. So if I ask her the question, I'm going to get the answer, the very raw truth. I asked her several times, 'Can I put this in your movie?' and she would say, 'I have no secrets, I have nothing to hide.' She's very entertaining and funny and very smart."

The film partners said their working styles complemented each other.

"I'll say something ridiculous because I don't have a vocabulary for it," Lewis said. "Like, 'Do that thing that looks like that with that one thing,' and she'll say, 'Oh, yeah,' and she fixes it up, and I say, 'That's exactly what I wanted!'"

Such as when Lewis asked Eris to spice up the opening of the movie: The only direction she gave Eris was to use Martin's dollhouse. Eris came up with the idea of using animation to put a video of Liberace -- Martin's favorite performer -- on the dollhouse-size television.

"It was a lot of fun," Eris laughed. "It crashed my computer several times, it was so much fun."

While Lewis and Eris are eager to begin working on their next project -- a satirical documentary -- the duo will stay busy submitting their current film to festivals. They've checked the Hot Springs Documentary Film Festival off the list and are considering the Bentonville Film Festival and the Fayetteville Film Festival for submissions. They're also planning another fundraising effort in the fall.

Lewis said she hopes the festivals, fundraiser and the website will offer a chance to give a wider audience a view into Martin's inspirational life.

"I love unsung heroes," Lewis said. "I think people are going unnoticed that shouldn't be. We always want whiz-bang or something really heroic, but there are a lot of heroes everywhere you look -- you just don't know it."