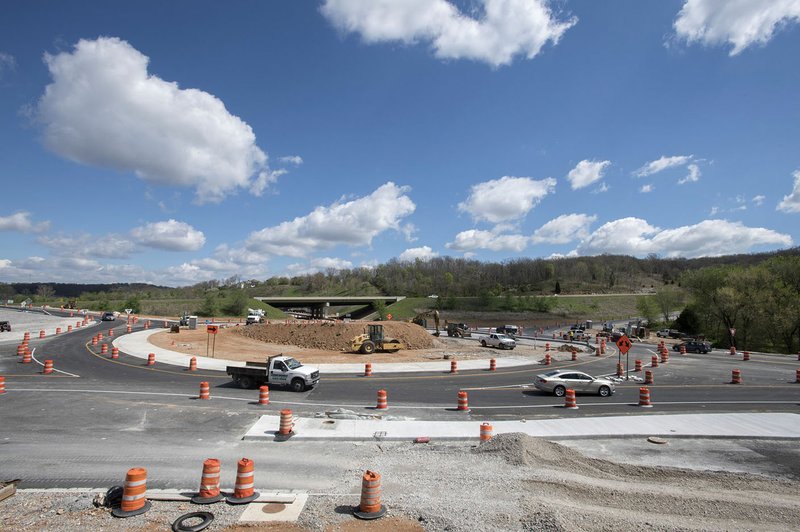 NWA Democrat-Gazette/J.T. WAMPLER A roundabout at the intersection of North Walton Boulevard and Interstate 49 opened earlier this month.

SPRINGDALE -- The ribbon cutting for the completed portion of the Bella Vista Bypass has been set for next month, regional planners were told Wednesday. The road still doesn't go to Missouri.

The ribbon cutting is set for May 10 and will be just west of the newly completed roundabout, according to state highway officials.

Crews are expected to place the final asphalt surface on the roundabout and approach ramps at the intersection of I-49 and North Walton Boulevard this week, but that could be delayed by weather. The roundabout opened to traffic earlier this month.

Arkansas has constructed 6 miles of the bypass, extending from North Walton Boulevard to Arkansas 72 near Hiwasse. The project involves the initial two lanes of a four-lane road. Money for the other two lanes has been identified by the Highway Department. The project is part of the Connecting Arkansas Program, which is paid for through a 10-year, half-cent sales tax.

Arkansas officials are waiting for Missouri highway officials to get going on their section of the bypass.

Missouri Department of Transportation officials have said finishing their missing portion of the Bella Vista Bypass is a top priority, they just need $32.2 million to do the four-lane section between Pineville, Mo., and the state line.

Arkansas has bought right of way between the current west end of the road and 2.3 miles away at the state line for $26 million and has the money to do two lanes along that stretch.

The last part of the project in Arkansas consists of interchange improvements at I-49 and U.S. 71 in Bentonville, where the Bella Vista Bypass heads west from the roundabout. That work is tentatively planned for 2020 and expected to cost $43.1 million.

Completion of the Bella Vista Bypass to interstate standards would fill the last gap on I-49 between Fort Smith and Kansas City, Mo.

Paul Simms with the Highway Department said Arkansas was one of a handful of states whose highway departments do not include a Department of Transportation designation.