Ramsey possesses will, skill to give Hogs’ ‘Razor’ an edge 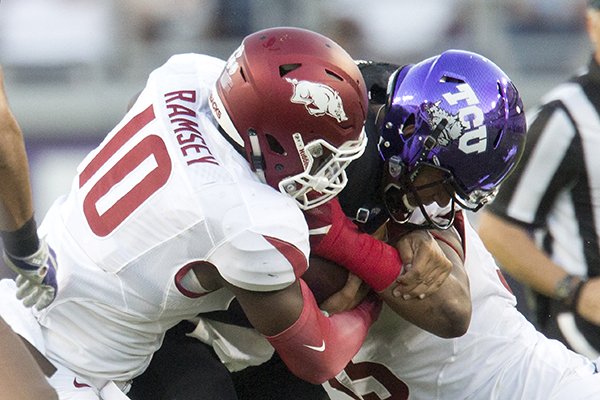 FAYETTEVILLE -- Randy Ramsey seems on the brink of fulfilling a prediction made by Bret Bielema about one year ago.

Ramsey decided to return to the University of Arkansas, Fayetteville, and pay his way last spring after Bielema removed him from the program for a semester for not having his priorities in order and slacking in the classroom.

NOTEWORTHY Playing first-team “Razor” outside linebacker in Arkansas’ new 3-4 scheme. … Started 3 games and played in 12 last season, leading the team with 3 forced fumbles, along with 23 tackles and 5.5 tackles for loss. … Posted a quarterback hurry in three consecutive SEC games. … Had two quarterback hurries and a 12-yard sack in the Hogs’ 31-10 victory over No. 11 Florida. … Notched 1.5 tackles for loss vs. Virginia Tech. … Paid his own way to Arkansas last spring before being placed on scholarship in the fall by Coach Bret Bielema.

Around this time last year, Bielema pointed out that Ramsey was sending him a text with scripture on it each day as a way of assuring his head coach he was driven to get back to the playing field.

"He's on task, on point," Bielema said at the time. "He's a very focused young man who I think has found a path that if he stays on it, we could have ourselves a really good situation there.

"I don't know if I've ever in my coaching career had a guy leave the program for a semester and come back and do as well as he's done."

Bielema went on to say that Ramsey could be one of the best comeback stories of his coaching career.

One year later, after Ramsey racked up 23 tackles while playing in 12 games with 3 starts, he's one of the centerpieces of Arkansas' move to the 3-4 defense.

Ramsey, at 6-4, 228 pounds, was a natural choice to man the "Razor" outside linebacker position because of his pass-rushing skills, his ability to play the run, as well as possessing the agility to cover tight ends, backs and slot receivers.

"I think there's more things he's in position to do in the 3-4 than there were in the 4-3," said defensive coordinator Paul Rhoads, who teamed with Bielema and the other defensive assistants to put together Arkansas' new schemes.

Ramsey's ability to make plays was evidenced by his 5.5 tackles for loss, which tied for third with Deatrich Wise and McTelvin Agim last season. Ramsey led the team with three forced fumbles, which ranked third in the SEC.

He was fourth on the team with 32 lost yards on his tackles behind the line, trailing Jeremiah Ledbetter (52 yards), Brooks Ellis (41) and Bijhon Jackson (33).

He this despite having to deal with offensive tackles on many plays as the strong-side linebacker who often came of the field on passing downs. Now he's got more of an aggressive array of calls and movements to help free him up.

"It was a lot of reading the tackles' stance," Ramsey said. "I couldn't just go and get the quarterback.

"That's why I'm glad we changed to the 3-4. I don't really have to be down there battling a lot with those [tackles]."

New outside linebackers coach Chad Walker has been effusive about Ramsey's progress.

"Randy's game has ascended every day," Walker said. "That's kind of been the challenge to him. ... Compete and find that within yourself. Find that competitor that you want to be.

Playing a hybrid type of position is a good fit for Ramsey, who played on all three levels of the defense at Dillard High School in Fort Lauderdale, Fla., as a cornerback, safety, linebacker and defensive end.

Ramsey said the new calls are falling in line with his improved ability to learn and execute plans.

"I feel like I'm catching on real fast," Ramsey said. "The coaches are telling me that, just to get better every day and practice hard."

Ramsey said he patterns his game after Von Miller, who plays a similar position with the Denver Broncos.

"I love the 3-4," Ramsey said. "A guy with my skill set, I'm able to help the team more because I'm playing in space now. It's kind of catering to the way I play."

Walker said he is glad to start his first year at Arkansas with a player of Ramsey's caliber.

"He does a really nice job standing up, whether it's playing in space or breaking on the ball, and he can rush the passer," Walker said. "He adds that element. He can do it all."

Print Headline: Ramsey possesses will, skill to give Hogs’ ‘Razor’ an edge