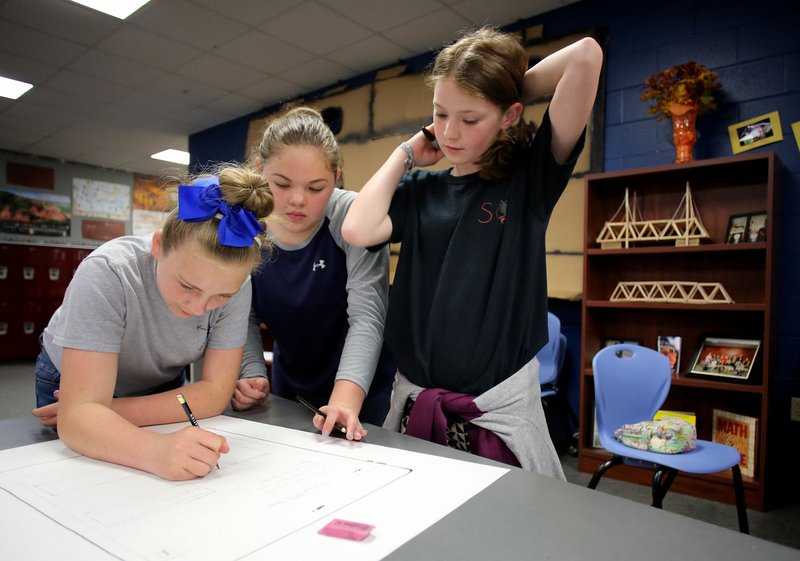 Kylee Dunn (from left), Emma Evans and Alyssa Wilson, all sixth-graders at Sonora Middle School, work on an antibullying project Friday during the lunch hour at the school. A focus on providing students with a personalized learning environment supported by technology has resulted in Principal Martha Dodson seeing an increase in students who ask for passes to work on projects during lunch. - Photo by David Gottschalk

SPRINGDALE -- Now that every student has access to a laptop or tablet computer at school, learning with technology is possible at any moment. 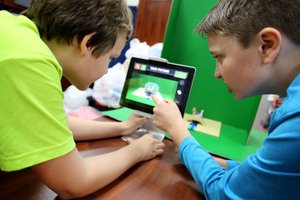 Photo by David Gottschalk
Adam Teakell (left), and Brayden Hamilton, both sixth-graders at Sonora Middle School, work Friday on an adventure-themed stop-motion animation video during the lunch hour, at the school. A focus on providing students with a personalized learning environment supported by technology has resulted in Principal Martha Dodson seeing an increase in students who ask for passes to work on projects during lunch.

The devices came from a $25.9 million Race to the Top grant the U.S. Department of Education awarded the Springdale School District in December 2013. The district is in its third year of the grant. The department recently approved extending the deadline for spending the money through June 2018.

Race to the Top grant

• Provided $25.88 million over four years from the U.S. Department of Education

• The final year of the grant will focus on technology, high quality training for staff, parent engagement, coaching and evaluation, and School of Innovation

District leaders will focus on how to keep the momentum toward their goal of allowing all students to make choices and set goals for their learning, said Megan Slocum, associate superintendent of curriculum and instruction. Technology makes that learning environment possible.

"We are still at the beginning stages of personalization," Slocum said. "Our schools are in different places depending on what they're experiences have been and the students they serve."

It's now common for Sonora Middle School Principal Martha Dodson to have students ask for passes during lunch to go work on projects in classrooms, she said.

"It's not just the ones who are highly motivated," Dodson said. "We are intrinsically motivating more students through project-based learning. They're finding something they're interested in."

Sonora, for students in sixth and seventh grade, put an emphasis on project-based learning and integrating subjects, Dodson said. Units of study begin with a scenario that launches a project in which students solve problems. All the students are guided by a teacher.

A study in science focused on pollution. Students chose the type of pollution to study. Students who chose food waste decided to make posters to hang in the school after they calculated the amount of food waste in the cafeteria.

Others studied paper waste. Dodson received some letters about their concerns because students are encouraged to present their perspective and to ask for feedback.

Other projects have spurred students to write letters to businesses and the School Board, Dodson said.

Sonora's staff wants to prepare students for the technology they will need as adults, she said. The combination of project-based learning with technology is providing more opportunities for students to learn in innovative ways.

Students take greater care in preparing portfolios of their work, which they share each fall and spring with parents during academic conferences the students now lead, Dodson said. Teachers are close by to answer questions and assist with the discussions during conferences.

They make it a priority to finish a project, even if that means taking time to work on it during lunch, she said.

Work already had started to develop the Don Tyson School of Innovation when the district received the Race to the Top grant. The school, which opened in the 2014-15 school year, is a demonstration site for ways the district wanted to personalize learning. It has about 500 eighth- through 10th-graders.

The district received permission from the Arkansas Department of Education to waive requirements for how much time a student must spend in class to earn credit. Credit is earned when a student demonstrates he's mastered a subject.

"For the School of Innovation, we put their curriculum together in about two months," said Jennifer Raabe, a math teacher who was involved in developing the school's curriculum. "We were trying to come up with innovative ways for kids to work through using technology."

Lessons and tasks had to be converted into a digital format so students could access them from their Chromebooks, Raabe said. They needed projects that enabled them to learn what Arkansas expects students to know while also building skills in teamwork and communication.

Instead of looking at shapes on a piece of paper for a geometry lesson, dynamic software allows students to see what happens to the angles of a triangle when they manipulate its sides, Raabe said. They are able to look at a table of numbers and see what happens on a graph when they enter different numbers into the table.

The goal wasn't for students to work on their own, but to use their Chromebooks to share ideas and work on projects with their peers, Raabe said.

A challenge was providing choices and options for students to be challenged and to deepen their understanding, Raabe said.

"Kids can move through the curriculum," she said. "Even their regular pace is a little quicker than the other schools. They can accomplish the same curriculum in a shorter period of time."

Experiences at the School of Innovation have led to changes in the curriculum for schools across the district, Raabe said.

"We've come up with better curriculum where kids can still collaborate and communicate, but, by using technology, we're preparing kids with better 21st century skills along with the content," Raabe said.

It will take time for teachers to understand what it means to personalize learning, Slocum said. She has learned from districts in Maine and California that the process will take years.

The district had spent $22.3 million of the $25.9 million grant by the end of March, said Kelly Hayes, the district's comptroller.

The technology project, which received $15.8 million of the total, involved providing every student with a computing device and the necessary infrastructure for wireless Internet access across the district. The district plans to keep the effort going with state money districts receive based on their populations of low-income students, Hayes said.

The district's information services division bought enough Chromebooks for every third- through 12th-grader to have access to one during the school day. Kindergarten through second-graders' classes are equipped with iPad minis for each pupil.

Many Springdale teachers have received training from the eMints National Center on the use of technology for learning because of the grant. The national center is within the University of Missouri's College of Education. A group of teachers in the district provided additional training on integrating technology into learning.

For years, schools have been driven to push every student to reach a certain level by a certain point in the year, Slocum said. The new direction in Springdale is opening letting students access the education and push forward.

"The fun part is watching kids press that line beyond that," Slocum said. "We want kids who are striving and pushing and reaching goals we had no inclination they would be able to reach in the amount of time they've been able to reach it."

Students who entered kindergarten after the 2014-15 school year will go through school receive an education that fits their interests and puts them in charge of their learning, Slocum said. They are preparing portfolios each fall and spring to share with parents during classroom conferences they are learning to lead. They have to communicate with their parents goals they set for themselves. When they fall short, they have to explain why and share what their next steps are.

"It puts the responsibility on the student to say, 'This is up to you to make sure these things are happening,'" Slocum said. "Here's how to apply it. Now what are you going to do with it."