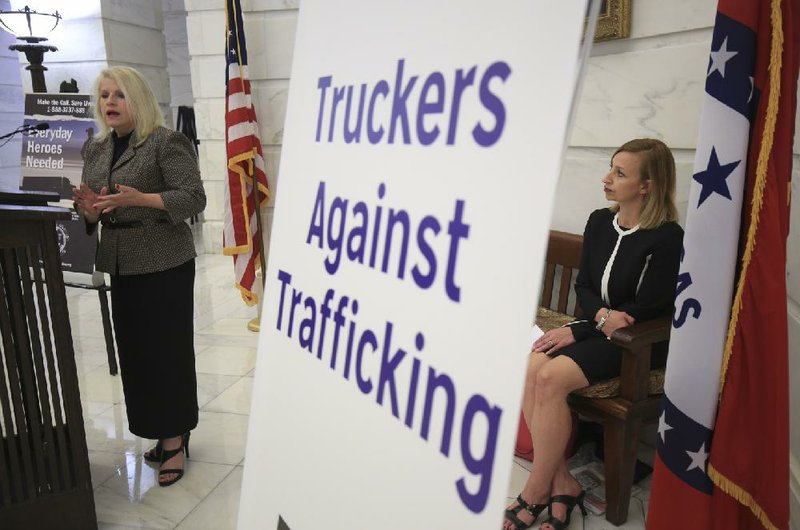 Sen. Linda Collins-Smith (left), R-Pocahontas, speaks Tuesday during a news conference at the state Capitol about House Bill 1923 as Kylla Lanier with Truckers Against Trafficking waits her turn. The bill, signed by Gov. Asa Hutchinson shortly after the event, would require a human trafficking prevention course for drivers as part of commercial licensing requirements.

About 60,000 truck drivers licensed in Arkansas will be required to complete a human trafficking prevention course under legislation enacted in this year's regular session, state officials said Tuesday.

The law will help save lives, said Sen. Linda Collins-Smith, R-Pocahontas, who is the Senate sponsor of the measure.

"The fact is that those places that [human traffickers] utilize to pimp or put out the young people are places that are frequented by truck drivers, and 95 percent of the truck drivers want to do the right thing," Shannon Newton, president of the Arkansas Trucking Association, said after a news conference at the state Capitol. "They want to help out. They want to know what to do if they see something that looks suspicious."

Under Act 922, a person wanting to obtain or renew a Class A commercial driver's license will be required to complete a course administered by the Arkansas State Police or a state police-approved third party. Another option is to complete an online certification course offered by Truckers Against Trafficking. Evidence of completion will be given to the state Department of Finance and Administration.

After the applicant completes the online course, the state police will receive documentation verifying the work, said Bill Sadler, a state police spokesman. The course includes a 26-minute video and a 15-question quiz, said Kylla Lanier, deputy director of Truckers Against Trafficking, based in Englewood, Colo.

Truckers Against Trafficking will provide the course for free, Newton said.

The Class A commercial driver's license is good for four years, Sadler said. The course is designed to be a one-time course for these license holders, he said.

"This is the first of its kind legislation," Lanier said at the news conference.

Similar legislation is pending in the Kansas and Texas legislatures, and Ohio's highway patrol adopted this training requirement as a rule, she said.

The Arkansas Trucking Association has encouraged its members to voluntary train their members and "this particular piece of legislation pushes that envelope a little farther," Newton said.