All charged up: Tesla building station in Little Rock 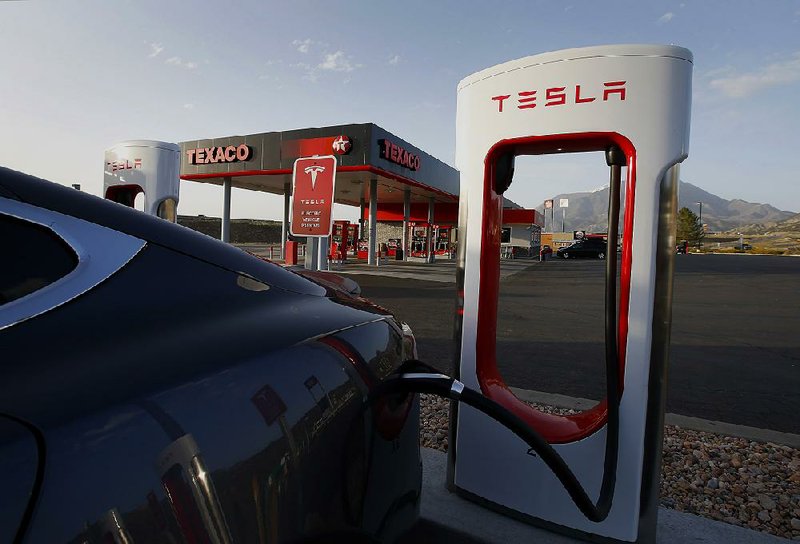 A high-powered charging station that can quickly charge a Tesla electric car is under construction in Little Rock and, enthusiasts of the car say, will begin to fill what they described as a gaping hole in the company's network of Supercharger stations across the nation. 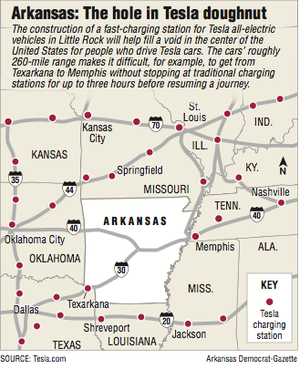 A map showing the Tesla charging stations in the surrounding states.

It is difficult to overstate the significance of the Supercharger station that is going up at the Outlets of Little Rock at 11201 Base Pro Parkway near the Interstate 30/Interstate 430 interchange, at least for Tesla owners in the region.

Tesla owner Andy Rosemore of Plano, Texas, likened the Little Rock station, the first one in Arkansas, to the moment nearly 148 years ago when the rails were finally joined on the First Transcontinental Railroad across the United States.

A golden ceremonial final spike was driven by Leland Stanford, after whom Stanford University is named, to connect the Central Pacific and Union Pacific railroads on May 10, 1869, at Promontory Summit in what was then the Utah Territory.

"It's like the golden spike when the railroads came together," Rosemore said of the advent of the Supercharger station in Little Rock. "This is joining the superhighway together by adding Little Rock."

Tesla describes the Supercharger station as the world's fastest. It can charge Tesla cars "in minutes instead of hours," the company said.

Baldwin Shell Construction Co. of Little Rock obtained a permit to construct what has been described as a 10-bay station earlier this month. Area Tesla owners have been posting updates on its progress to Tesla Motors Club discussion forums, including photographs. The city permit placed the project's value at $140,000.

It is unclear how long it will be before the site is operating, with some owners suggesting it could be as little as three weeks and others suggesting it might be three months. The Supercharger stations typically require the separate installation of a transformer, city inspections and Tesla testing before they open.

Tesla didn't reply to an email sent last week about the timing. But Tesla owners say that the company generally remains mum about the projects until after they are finished, and only acknowledge it by adding it to its map of Supercharger stations on the company's website.

An unofficial website mapping Supercharger stations lists locations as soon as its operator learns a permit has been obtained. It also maps locations under construction, including the Little Rock site.

The lack of a Supercharger station in Arkansas has frustrated and perplexed area Tesla owners for several years. Discussion threads about the issue on online forums go as far back as 2014.

Owners of Teslas and other electric vehicles can recharge their vehicles in Arkansas, but the charging typically requires a stop of several hours, at least, or an overnight stay at a hotel to build up enough capacity to get through the state.

The station isn't targeted at Arkansas electric vehicle owners, who typically charge their vehicles at their homes. Instead it is aimed at people passing through the state.

Memphis landed a Supercharger station about four months ago, as did Texarkana, Texas. But the 278-mile route between the two cities wasn't a practical choice without the Little Rock station. A Tesla can typically travel 265 miles fully charged.

If they chose to go through this part of the state, drivers would stop at a hotel offering what is called destination charging stations, which require an overnight stay for a full recharge.

Or they can go to places such as the Clinton Presidential Library, which has free hookups for electric vehicles. Those stations can only charge at a rate of 40 miles or so in an hour. Others would rent space at a park aimed at recreational vehicles, where hookups also are available at a similar charging rate.

Carl Anthony, a music professor at the University of Central Arkansas and Tesla owner, said Tesla owners called Arkansas the "hole in the doughnut" of the Supercharger station network.

Only four years ago, however, there were only seven Supercharger stations in the world when Kevin Pheiffer, an architect from Dallas, bought his Tesla. Now there are 841, including 352 in the United States, according to the Tesla website.

"It's exciting for me," he said of construction of the Little Rock station. "I've got relatives in St. Louis. Now I will be able to zip to Little Rock and Memphis."

'HOLE IN THE DOUGHNUT'

Some people involved in electric vehicles said the "hole in the doughnut" stemmed from a 1935 state law requiring anyone who sold electricity to go through the process of qualifying as a public utility.

Electric charging stations in Arkansas are all free now, to avoid that requirement, said Don B̶e̶a̶v̶e̶r̶s̶ Bearden* of Little Rock, who drives an all-electric Ford model and is a consultant on electric vehicle charging station sites.

Tesla owners who bought their cars before 2017 can use the Supercharger stations free for the life of their car. But people who buy them now only get 1,000 free miles from those stations before they will begin to pay.

Bearden and other electrical vehicle enthusiasts were behind Senate Bill 272 that exempts electrical vehicle charging stations from being considered a public utility and regulated by the Arkansas Public Service Commission. It was signed into law by Gov. Asa Hutchinson on March 1.

Sabin said Arkansas' law is modeled after a 2015 law that allowed people to sell compressed natural gas for CNG vehicles.

One Supercharger station in Arkansas isn't enough, Tesla owners say. They already are discussing the possibility of one in the Fort Smith area as well as Northwest Arkansas.

John Mills, a Tesla owner from Little Rock, said he began his 7,800-mile round trip to Seattle and other locales out west last summer with an overnight stay in Fort Smith because the first Supercharger station on Interstate 40 at the time was Oklahoma City.

The Fort Smith location, on I-40, would be as significant as the Little Rock station, said Joe Ozegovich of Memphis, vice president of the Mid-South EV Club.

"With one more charging station, I-40 will be connected between the West Coast and the East Coast," he said.

*CORRECTION: Don Bearden of Little Rock is an electric vehicle charging station sites consultant. His last name was misspelled in a previous version of this story.

Print Headline: All charged up: Tesla building station in LR