Step right up for 'circus rock' by People's Blues 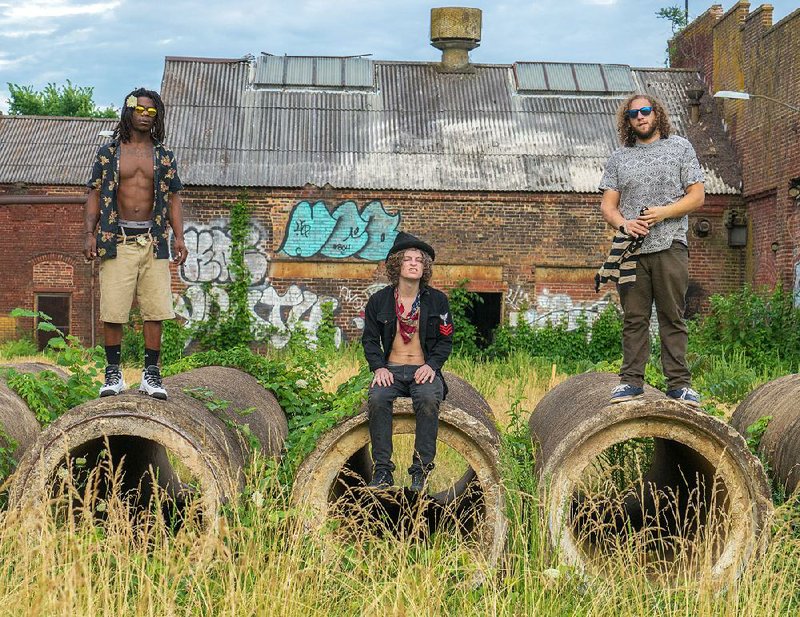 The People's Blues of Richmond are bringing the party to Little Rock tonight.

"Tell everybody we want to hang out with them," says Matt Volkes, the band's bassist and co-founder. "We want to have drinks with them and tell them not to be shy when they see us."

The high-energy rockers from -- surprise! -- Richmond, Va., are touring behind Quit or Die, the band's third album, which was released in June.

"We are a rock 'n' roll band," Volkes says, while making last-minute preparations before he and his mates -- singer-guitarist Tim Beavers and drummer Nekoro Williams -- begin the latest leg of what seems to be a never-ending assault on the road. "We may have the blues, but we don't play the blues. We call it circus rock."

Combining thundering, '70s rock radio riffs with a vicious crunch that's like early White Stripes with a psychedelic spin, the People's Blues of Richmond have been around for almost eight years.

The band started when Volkes and Beavers, who had known each other since kindergarten, were living together after high school. A mutual friend had committed suicide and, while grieving, the pair began jamming together.

"We had a music room at our house, but we weren't playing together," Volkes says. "[Beavers] was doing folky, Bob Dylan-esque stuff and I was playing in an acoustic trio."

Something clicked, though, when they started playing and remembering their friend.

"I sat down on the drums, just to get some of that [sadness] out. We sat there and cried about it and we said, 'Man, this feels good.'"

The pair soon started hitting up open-mic nights and working on original material.

"It just went from there. We never stopped. It just felt too good," says Volkes, whose father played drums in a New York outfit called the King Biscuit Blues Band (no relation, apparently, to the long-running King Biscuit Time radio show on Helena radio station KFFA).

The People's Blues of Richmond went through a drummer and a keyboard player before settling on the current lineup, with Williams, son of drummer Drummie Zeb of reggae band The Wailers, behind the kit.

Though Williams has been in the band three years, "This is our first album with [him]," Volkes says. "Between touring and finances, we haven't had time to actually get down and do it. But it's nice now to have something that represents what we're doing."

Volkes says he can see where the band has grown since its 2011 debut, Hard On Blues, and 2013's Good Time Suicide: "We started when we were 19 and wide-eyed. Everything looks different now. The types of sounds you like change. Maybe when you were a kid, you didn't like broccoli, but now it's your favorite thing."

The trio are unrepentant road dogs, touring relentlessly and sharing bills with the likes of Tom Petty, ZZ Top, Modest Mouse and more. They once covered ground between Tahoe, Calif., and Omaha, Neb., in a 23-hour sprint just to make it to a gig.

"Our plan is to be on tour for the next 40 years," Volkes says, with only the slightest hint at exaggeration. "I'm only 27. You've got to get it in while you can."