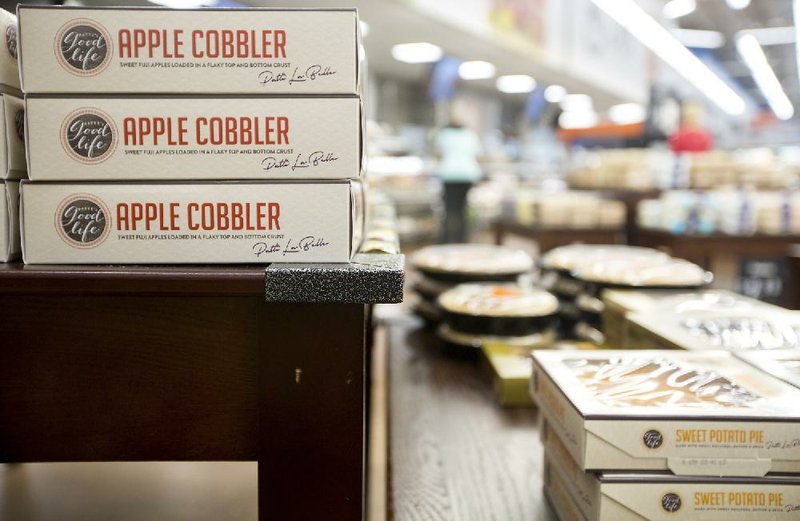 A selection of Patti LaBelle apple cobbler and sweet potato pie is on display at a Wal-Mart store in Rogers.

Kinna Thomas, Wal-Mart's senior buyer for cakes and pies, was determined to help the retailer improve its bakery offerings and had been working with suppliers to create a sweet potato pie based on her family's recipe. The item passed the taste test, but Thomas wanted more. So she thought about enlisting help from a baking expert.

"I had the expectation that if I called anyone they would answer," Thomas said. "But the fact three days in I was on the phone with Ms. LaBelle herself ... I did not expect that."

Wal-Mart didn't expect the sensation the pies would become, either, after a YouTube review from Los Angeles-based entertainer James Wright Chanel went viral. But the success proved to be a shot in the arm for Wal-Mart's bakery transformation efforts and has led to further work with LaBelle.

Five more LaBelle-label desserts -- peach, berry and apple cobblers, an apple pecan cake and a sweet potato loaf -- have landed on Wal-Mart's shelves this month. While the sweet potato loaf is limited to about 500 stores in the Northeast, the other four products are available in stores nationwide.

The items are just one part of Wal-Mart's bakery selection, but the partnership with LaBelle has been among its most fruitful. She is best known for a musical career that produced hits like "On My Own" and "Lady Marmalade," but LaBelle also carries clout in the kitchen. She has published a series of cookbooks and hosted a cooking show.

"She's been a great partner in sitting down with us, talking through ideas," Thomas said. "We come up with great recipes from her cookbooks, gather information from her and then from there we get our product development teams involved just to make sure we feel good about the total quality together.

"It's a collaborative relationship between the both of us."

Thomas said it was evident from the first conversation with LaBelle. She provided an added touch to the sweet potato pies Wal-Mart was testing, resulting in a thicker crust, additional flavors and improved texture.

Wal-Mart was confident it had a hit when the $3.98 pie appeared on shelves in August 2015, but the success wasn't clear until November when Chanel's YouTube post was viewed by millions. He ate, sang and raved about the dessert during a three-minute video, igniting a Patti Pie craze. Wal-Mart has not disclosed how many of Patti's Pies have been snapped up by customers, but previously acknowledged it sold one pie per second at the height of the craze.

The swell of sales also left the retailer scrambling to keep up. Thomas said Wal-Mart had to scour suppliers for sweet potatoes, buying more than 1 million pounds just to get the pies back in stock after a two-week drought.

Laura Rush, Wal-Mart's merchandise manager over the fresh bakery, described the demand as a "phenomenon that could not even be fathomed." But she also believes the sensation gave Wal-Mart some much-needed credibility.

"It became a catalyst for the customer to give us another try on other items," Rush said. "That phenomenon gave us a platform to say it's not just the Patti Pie. It's everything else. It shone a spotlight on a change in quality for us."

Improvements in the fresh business -- bakery, deli and produce -- has been a key part of Wal-Mart's strategy to make in-store shopping better for customers. The retailer believes those efforts are taking hold after same-stores sales growth of 1.6 percent and traffic gains of 1.2 percent in the second quarter of fiscal 2017.

Wal-Mart doesn't disclose specific bakery sales, but industry reports estimate the overall in-house market accounts for more than $13 billion annually. The market is expected to grow to $18.4 billion in sales by 2020, according to the International Dairy Deli Bakery Association, as 56 percent of retailers view their in-store bakeries as destination drivers.

So Wal-Mart understands the potential and introduced 60 new items last year. More than half of the retailer's bakery selection is now made in-house, catering to customer preferences. The retailer also has hired about 120 bakery specialists who work with employees to improve quality, consistency and productivity.

"We're proud of what's getting put out on the shelf," Rush said of the bakery transformation. "Then for all the other items that are coming in, the quality has evolved."

Rush said it shows in the newest LaBelle desserts, which have helped the retailer eliminate a gap in its assortment.

While flipping through one of LaBelle's cookbooks in search of new ideas, Thomas stumbled across a recipe for peach cobbler. After additional research, Wal-Mart discovered fresh cobblers were hard to find in bakeries around the country and had a chance to produce another item with LaBelle.

The bakery team began searching for a supplier capable of making the product and cemented an agreement with Houston-based Twin Star Bakery, which already produces items like sandwich cookies and specialty dessert cakes for Wal-Mart. The bakery hired 100 employees to fulfill the cobbler commitment. The cobblers sell for $6.98.

There now are eight LaBelle-label desserts available at Wal-Mart. In addition to the sweet potato pie and the five newest items, the retailer also began selling vanilla pound and caramel cakes earlier this year.

Thomas said there could be more in store as the bakery collaboration with LaBelle continues.