Students at top of class if shoe fits 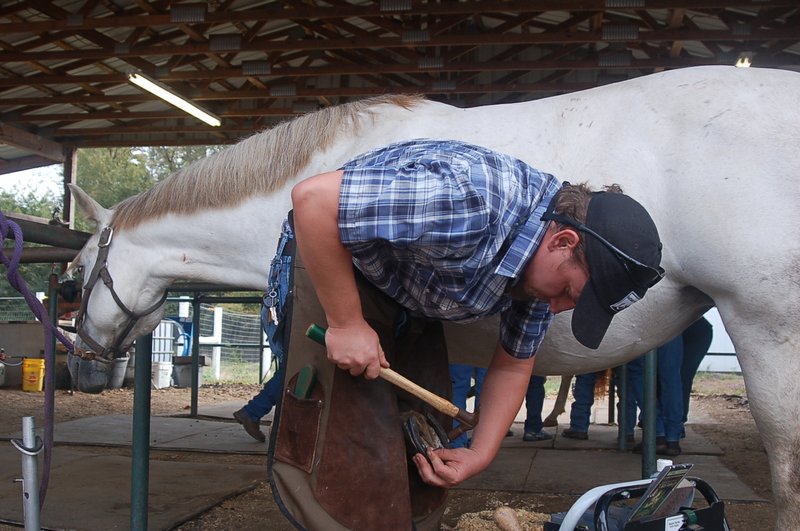 Will Davidson, a student from Farmington, Mo., puts a new shoe on Missy, a 6-year-old mare from Ola in Yell County.

CENTERVILLE -- There is no horseshoe pit to be found at the Arkansas Horseshoeing School, but there is a host of friendly dogs and a corps of students eager to make a horse's life a lot easier and healthier. 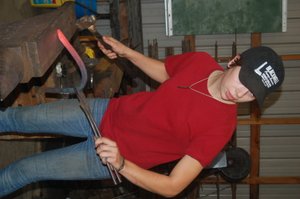 Photo by Stephen Steed
Tori Ellison, 19, an Alaska native and an apprentice at the Arkansas Horseshoeing School near Dardanelle, seeks a little advice on shaping the shoe. 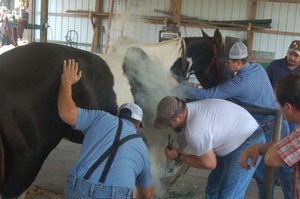 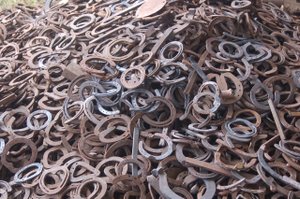 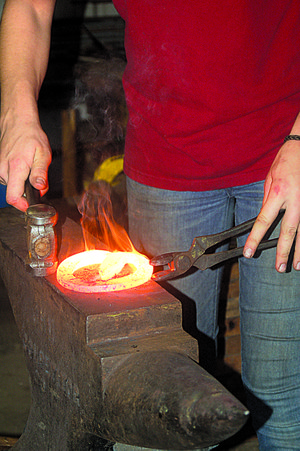 Photo by Stephen Steed
A “heart bar” shoe flames up from its place on an anvil after just a few minutes of being inside a forge that heats up to over 2,000 degrees.

Founded in 2009 by the Dorris family of near Centerville, just south of Dardanelle in Yell County, the school has taken some 150 students over the years and helped turn many into certified farriers. It is one of about 20 horseshoeing schools in the nation.

"I don't want more than six students here at any one time," said D. Paul Dorris, who started the school with his father, E. Paul Dorris. "We want to give them the best possible one-on-one personal instruction."

The horseshoeing business has been in the family since the late 1800s. The elder Dorris, now 85, shod horses for 45 years before finally giving it up just three years ago. "You never get it entirely out of your system, so I'll trim hooves and do some shoes from time to time," he said. "I think I still learn something new every day."

On a recent unseasonably warm Friday in October, the school's four students and one apprentice were busy cleaning the stalls and shop, even tidying up their bunkhouse, for the next day's horse clinic. The clinic is open to horse owners for discount trimmings and shoeings and to farriers to attend to a few horses or simply to visit.

A Canadian, Daylen Tidmarsh, 24, is second only to Logan Anderson in receiving the brunt of some good-natured ribbing from fellow students -- and from the Dorrises -- but that is only because Anderson, 18, is a Mississippian.

Tidmarsh arrived at the school Oct. 4 to start an eight-week course. He has trained horses in Magrath, Alberta, for 11 years. He considered attending a horseshoeing school in Oklahoma but chose the Dorrises' school because of its quick response. "Paul was quick to answer emails and quick to answer the phone or respond to voice mail," Tidmarsh said.

He'll spend the winter in Canada "practicing my forge" and will be back in Arkansas in April for another eight weeks or so.

He wants to apprentice in Calgary. He already has two years of study in animal science and podiatry. "My ultimate goal is to be a veterinarian-farrier" at Spruce Meadows, a world-renowned equestrian facility outside Calgary, he said.

Tidmarsh and Anderson are joined by Will Davidson of Farmington, Mo., who recently left the Navy after a seven-year hitch to attend school on the GI Bill, and Vince Pettet, a retired truck driver from Harrison.

Tori Ellison, 19, of Lowell is a repeat customer. She attended her first course a year ago but returned this fall as an apprentice.

Ellison, a native of Alaska, said she has been around horses all her life. "I want to continue on, but I don't want to be around the drama of the show-horse people," she said.

Dorris said five or six women a year will attend his school. "I've come to find that they have a great eye for detail, a better eye for it than most most," he said. "They're also gentler with the horses. Men tend to come in here thinking they can just manhandle the horses around, but they soon find out they're wrong."

Mack Hayden of Russellville, who retired from the Arkansas State Police in 1996 after 27 years, was among 50 or so visitors at the Dorris clinic on that Saturday. A certified farrier, Hayden started shoeing horses 35 years ago. In 1988, he began teaching inmates at the state Department of Correction how to shoe horses, in part to teach them a skill once they leave prison.

"It also saves the penitentiary a lot of money, because it won't have lame horses," Hayden said. "You can keep healthy horses out in the fields and work them a lot longer."

"For want of a nail, the shoe was lost.

"For want of a shoe, the horse was lost.

"For want of a horse, a rider was lost.

"For want of a rider, a battle was lost

"And so a kingdom was lost,

all for the want of a horseshoe nail."

In short, ignoring details can have dire consequences.

When horse owners have to put down a horse, they'll often offer the animal's limbs to the school for study -- not unlike the fetal pigs and frogs used by students in high school and college biology courses across the nation.

"If you put a nail in the wrong place, you can hurt a horse really bad," Dorris said. "That's why we study everything we can about an animal -- its anatomy, physiology, its arteries, how its tendons and ligaments work."

Students choose among courses of eight, 12, 16 and 24 weeks but, like going to college, a semester or two doesn't make a graduate. Another 24-week advanced course is available. Tuition ranges from $6,900 to $15,900, and includes housing and, at the end of the course, a 100-pound anvil, a tool set and a two-burner forge.

School runs Tuesday through Saturday, much of it in the classroom, with time spent not just on anatomy and therapeutics but on business management.

When horses don't come to the students, the students go to them. "We'll take field trips at least once a week -- out to farms across the state, where we'll shoe and trim horses, mules, even oxen sometimes, anything to give students that hands-on experience."

A school day typically starts at 8:30 a.m. and, with field trips, may not end until 9 that night, Dorris said. Every other Friday, the students drive to Fayetteville to the clinic of Paul Turchi, an equine veterinarian, to study X-rays.

The main tools of the trade --unchanged for centuries -- are an anvil, hammer, tongs and a really hot fire.

With a propane forge burning at 2,500 degrees, it takes just a couple of minutes to soften up a foot-long piece of steel. A visitor whose most dangerous tools of his trade are a ballpoint pen and a notebook uses a pair of tongs to hesitantly take the glowing-red steel from the oven to a century-old anvil.

"Don't reach for the work; let the tools bring the work to you," Dorris says as the visitor not so elegantly tries to hold the steel around the horn, or point, of the anvil while, simultaneously, pounding away with the hammer to bend it.

Two hours later, the steel was reasonably shaped like a U and had decently spaced nail holes. Although Dorris praised it -- "not bad for your first!" -- any respectable horse likely would have neighed at it.

Most farriers won't get rich in the business, although six-figure salaries aren't unheard of for a farrier in the upper echelons of thoroughbred-racing or show-horse industries.

By the end of school, his students "won't be farriers yet, but they will be marketable apprentices," Dorris said.

But the profession has its drawbacks.

"It's hard work, for sure," Dorris said. "I've gotten knocked in the head more times than I can count. I've had broken ribs and broken toes. Once, I got double-barreled -- kicked by both hind legs -- square in the stomach by a 1,600-pound mare. You don't get sick days when you're self-employed. You have to get right back up as soon as you can.

"As good as the work can be, there's a law of diminishing returns to it. I think it was two years before I realized my wife had left me."

Print Headline: Students at top of class if shoe fits