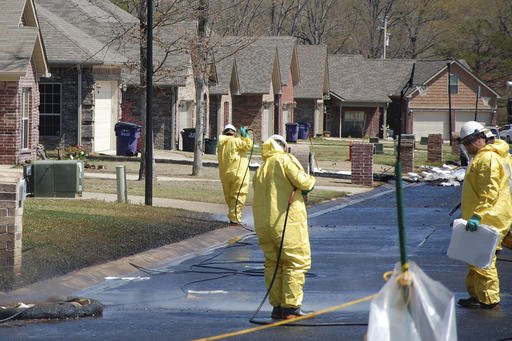 In this April 1, 2013 file photo, crews work to clean up oil in a Mayflower, Ark., neighborhood after an oil pipeline ruptured and spewed oil over lawns and roadways. Attorneys for landowners along the crude oil pipeline that ruptured in 2013 are asking a federal appeals court to reinstate their case. Landowners sued Exxon Mobil Pipeline Co., in 2013, alleging a breach of contract, but the case was dismissed in 2015. Oral arguments will be held Wednesday, Oct. 19, 2016, in Minnesota.

ST. PAUL, Minn. — An attorney for landowners along a crude oil pipeline that ruptured in Arkansas in 2013 said Wednesday that Exxon Mobil Pipeline Co. breached its contract with his clients because the pipeline interferes with their ability to enjoy their property.

Attorneys for the landowners and for Exxon Mobil appeared Wednesday before a three-judge panel of the 8th U.S. Circuit Court of Appeals in Minnesota.

Landowners' attorney Phillip Duncan asked the appeals court to reinstate the case — which was dismissed last year — saying his clients can prove the pipeline is damaging their property.

"We have enough proof to stay in court," he said.

But Exxon Mobil attorney Gary Marts said the case was properly dismissed and landowners are essentially trying to use a common-law claim to regulate pipeline safety —which is the job of the Pipeline and Hazardous Materials Safety Administration, not the courts.

The 850-mile long Pegasus Pipeline runs through Illinois, Missouri, Arkansas and Texas. The line ruptured on March 29, 2013, spilling tens of thousands of gallons of crude oil in Mayflower, about 25 miles northwest of Little Rock.

The 70-year-old pipeline was closed after the spill; a roughly 200-mile segment of it in Texas has reopened.