Bike to nature: Backpacking plus bicycling equals bikepacking, and it’s catching on among the adventurous 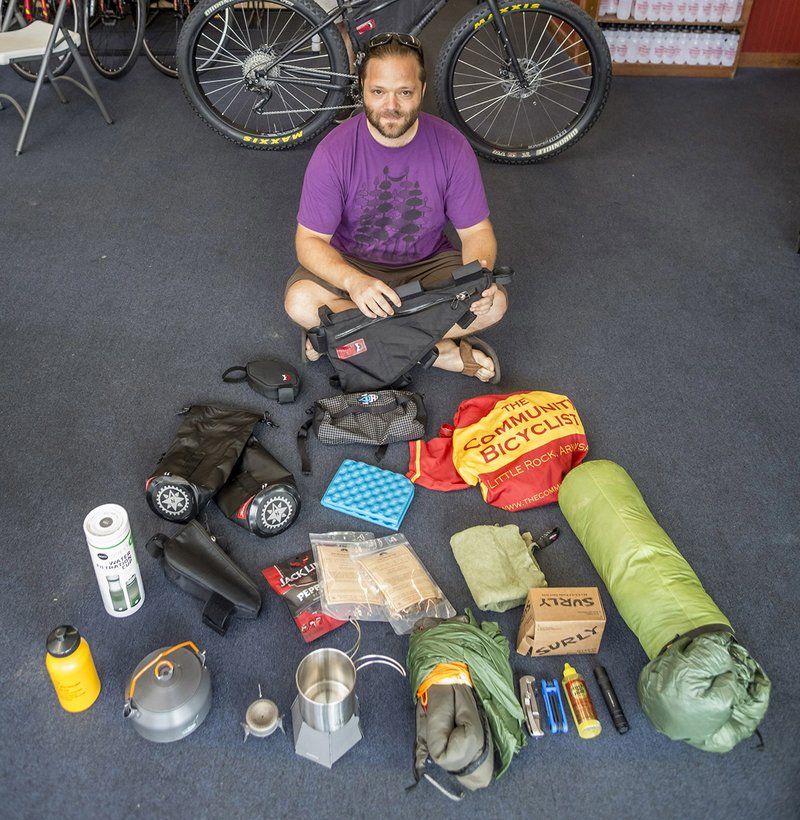 It all gets packed. Phillip Scalfano spreads out his bikepacking gear at Community Bicyclist in Little Rock.

Adventurous souls, tired of hauling camping gear on their backs like mules, and with no mules handy, have taken to strapping their streamlined supplies onto their bicycles and pedaling through the woods and countryside. They call themselves "bikepackers." 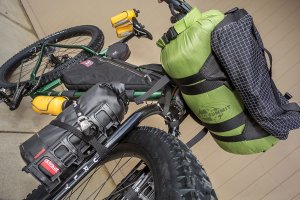 Photo by John Sykes Jr.
A Surly Krampus mountain bike is loaded down and ready for a bikepacking trip. 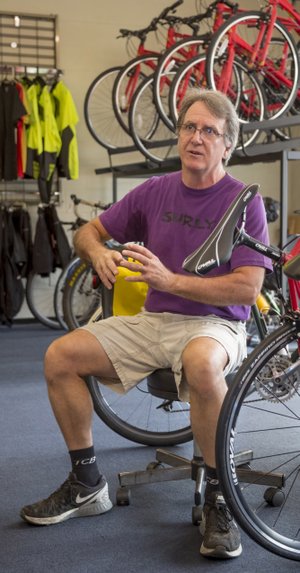 Photo by John Sykes Jr.
Sam Williamson, owner of Community Bicyclist shop in Little Rock, is a fan of bikepacking. 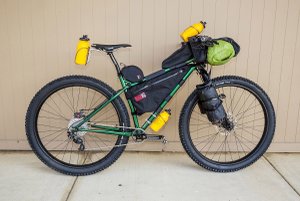 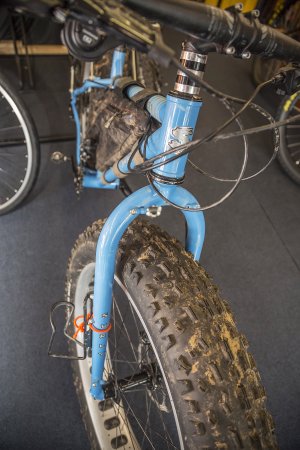 Here are four of them: Sam Williamson, Harrison Maddox, Phillip Scalfano and Jason Alexander, all of Little Rock, and all gathered on a sunny Friday morning in September at Community Bicyclist, the shop Williamson opened in Little Rock nine years ago.

"That's the cool thing," Williamson, 53, says amid the racks of bikes on display. "You can blend two activities together. I don't have that long of a history with ultralight backpacking and camping but, to me, it was another element I could explore with a mountain bike."

Maddox and Alexander were cyclists who also were familiar with camping and hiking.

"The thing about bikepacking," Alexander, 38, begins, "is that it's a perfect blend of people who love camping and being out in the woods, with distance riding and adventure-type stuff. And getting to do it on a bicycle is just great."

The ponytailed Scalfano, who has been riding since 2007, started bikepacking about a year ago, although he has been a backpacker for most of his 32 years.

"With backpacking you have to carry your own stuff. You're lifting stuff all the time," Scalfano says. "On the bike, you're moving it forward. The bike is holding your stuff up for you. You just provide the forward momentum."

These conveyances tend to be mountain bikes loaded with special bags and water bottles.

The bicycles ridden by these four are all made by Surly, a brand specializing in mountain bikes and touring bikes, among others, and all with funny names. There's Maddox's Karate Monkey, and Scalfano and Williamson both ride Krampus models. They have steel frames and 29-inch wheels with wide tires to soak up bumps and other obstacles on the trail because, unlike sportier mountain bikes, these are simple machines without fancy suspension systems.

An uncomplicated bike means there are fewer moving parts to break when you're miles from civilization.

Alexander's ride, however, stands out. With 26-inch wheels and tires that look like they'd be more suited for a John Deere tractor, his Surly Ice Cream Truck is a big blue monster known as a "fat bike."

"The difference between these bikes becomes clear when we get together on bikepacking trips," he says, comparing his bike, with its 5-inch wide tires, to the others, whose tires are about 3 inches wide. "I can rip downhill really fast. [The tires] give you a lot of confidence and security. Going uphill, though, these guys waste me."

It's not a competition, but Alexander has some race experience. Last year, he completed the Tour Divide Race, a self-supported, 2,700-mile, mostly off-road race along the Continental Divide from Banff, a town in Alberta, Canada, to Antelope Wells, N.M., on the border with Mexico -- in 26 days.

"That's more of the extreme bikepacking," says Alexander, an Episcopal priest who created the bikepackingarkansas.com website. "Around here, we usually go out for a day at a time, though we've been dreaming about some multiday adventures."

Strapped to their bicycles are the bags that allow cyclists to roam from the civilized world overnight. They range from saddle bags that fit beneath and behind the seat, to frame bags secured in the bike's front triangle, to handlebar bags that are attached to -- spoiler alert -- the handlebar.

"With backpacking, the focus is on weight, not volume," Scalfano says.

Bikepacking bags, often made of Cordura, a nylon fabric, are designed to "keep the bike more agile and lightweight," Maddox, 28, says. Because the bags are usually snuggled behind an existing component or into spaces in the frame, "it keeps the bike narrower," which makes navigating trails easier.

"The idea with the soft bags is that they keep the bike more manageable and ridable," Williamson says.

And though there are plenty of manufacturers selling bags, Maddox, who works at Aristotle, makes his own, an example of self-sufficiency that distinguishes bikepackers, Alexander says.

"There are a lot of tinkerers in bikepacking." And, as if on cue, Williamson produces a leather frame bag made by Breanna Bearden of Authentic Sundry Goods of Fayetteville.

So what, exactly, goes into these bags?

"Camping gear," Scalfano says. Sleeping bags, bivy sacks, hammocks, sleeping pads, food, tools, tiny stoves, spare inner tubes, water purification kits -- all the things one would need for a night under the stars. Bottles for water and other liquids are slipped into holders bolted to the bike frame and forks.

Planning where everything goes and what to bring on a particular trip is also part of the process.

"It's constantly about optimizing [space]," Alexander says. "What can I do to fit more things in there?"

The quartet usually heads out to the Lake Sylvia area of the Ouachita National Forest in Perry County, though they've also biked and camped along the Lake Ouachita Vista Trail around Lake Ouachita near Hot Springs.

Most anywhere open to the public with trails, dirt or gravel roads is prime landscape for exploring on a bike with your friends.

Bikepacking "taps into something," Alexander says. "There's this feeling of getting out of the box. It hits on the adventure spirit and draws upon all your resources."

Print Headline: Bike to nature; Backpacking plus bicycling equals bikepacking, and it’s catching on among the adventurous