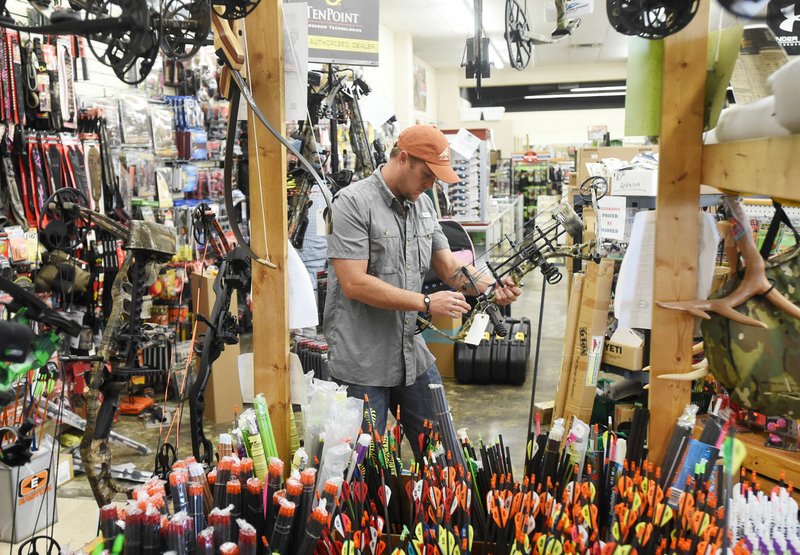 Jason Curlee of Fayetteville takes a look at the bows for sale Saturday at Southtown Sporting Goods in Springdale as he gets ready to go hunting for the weekend.

FAYETTEVILLE — Northern Arkansas will have deer hunts this fall despite the discovery of Chronic Wasting Disease in elk and deer herds in five counties.

• Studies have shown the disease can be spread both directly by animal-to-animal contact and indirectly through soil or other surfaces. The most common mode of transmission from an infected animal is believed to be through saliva, feces and possibly other body secretions.

• There is no evidence that chronic wasting affects humans. Still, public health officials recommend not consuming meat from animals known to be infected or animals that appear sick. They also recommend avoiding the brain, spinal cord, eyes, lymph nodes, spleen and tonsils, where the abnormal prions accumulate.

• There is no evidence the disease can spread to cows, pigs and other domestic livestock.

The Arkansas Game and Fish Commission has information online at www.agfc.com/hunting/Pages/HuntingDeerCWD.aspx.

Hunters are asked to report any deer suspected of having Chronic Wasting Disease on the Game and Fish website or by phone at 1-800-482-9262.

Archery season began in most of the area Sept. 24 and runs through February. The first muzzle loader season begins Oct. 15, and modern gun seasons begin in late October to mid-November. Elk seasons are in early and late October.

Flip Putthoff of the NWA Democrat-Gazette contributed to this story.

The Arkansas Game and Fish Commission included in its special regulations this year an incentive for hunters in the affected area to kill more deer than usually allowed.

But the rumors of a curtailed hunt this year persist.

“Absolutely not, that would be the last thing we want to do — shut down hunting seasons,” said Cory Gray, a certified wildlife biologist and deer program coordinator with Game and Fish. “That rumor has been floating around. I’ve heard that one. But, no, deer season will continue to move forward.”

This fall marks the first full hunting season since the disease was discovered in north Arkansas deer and elk herds. Wildlife officials have implemented several special regulations for the designated 10-county Chronic Wasting Disease Zone, which radiates from the epicenter of the outbreak in Newton and Boone counties. Other counties with the new restrictions are: Carroll, Madison, Johnson, Logan, Yell, Pope, Marion and Searcy.

Wildlife officials said the best way to prevent the spread of the disease is to stop the transport of any parts of deer or elk from areas found positive. The new rules prohibit hunters from taking a whole deer carcass out of the zone for processing. Antlers with cleaned skulls, meat with all bones removed, cleaned teeth, hides and finished taxidermy products can be transported.

“That is one of our main goals, to contain it inside the CWD management zone, and we have regulations that try to prevent the spread of it. But, our message is to continue to go on and hunt and enjoy the resource,” Gray said.

The impact of the disease in Arkansas and the new restrictions are expected to register on the state’s estimated 1 million deer, 600 elk and 308,000 licensed hunters, which are all part of a $1 billion-plus hunting economy.

Some hunters said the state went too far. Business owners talk about the uncertainty.

Chronic wasting is a neurological, brain and nervous system disease found in deer, elk, moose and other members of the deer family, according to the Game and Fish Commission. It is similar to mad cow disease and is 100 percent fatal to the infected animal. There is no evidence that the disease affects humans.

First discovered in a captive mule deer herd in Colorado in 1967, the disease has spread to 23 other states and two Canadian provinces.

No one is really sure how long Chronic Wasting Disease has been in Arkansas, but Game and Fish officials suspect it has been in the Buffalo River area for perhaps decades.

The first positive elk sample was taken from a 2½-yearold cow elk killed during the 2015 public land elk hunt on the Buffalo National River near Pruitt. The first positive deer sample came from a 2½-yearold whitetail deer doe found dead near the Ponca Elk Education Center in Boxley Valley in Newton County. The sample was confirmed in March. The disease has also been found in deer from Madison, Carroll, Boone and Pope counties.

Testing has found 109 positive deer and elk in Arkansas since last year. The majority, 100, have been found in Newton County. Boone County has had four positive deer, Carroll three, Madison one and Pope one, Game and Fish data shows.

Karen and Chuck Gerhardt live in rural eastern Benton County. Chuck said he saw two or three deer last year that showed symptoms of the disease but hasn’t seen any that looked sickly this year.

“I suspect that Arkansas has had CWD for years. It’s probably all over the state,” Chuck Gerhardt said.

Infected animals may not show any symptoms. But, in later stages, infected animals begin to lose control of bodily functions and display abnormal behavior such as staggering, standing with poor posture or losing fear of humans. Infected animals lose weight fast, appear in very poor physical condition and often stand in or near water and drink excessively. They may exhibit drooling or excessive salivation.

The only way to know for sure is to have a lab test lymph nodes and a portion of brain stem removed after a deer or elk is dead.

The Game and Fish Commission has had a response plan since 2006 in case a deer or elk from Arkansas tested positive for the disease.

Step two of the commission’s research is now underway. Road-killed deer and deer reported sick or dead throughout the state are being collected and analyzed to determine how far the disease has spread.

Greg Bohannan of Bentonville hunts deer extensively in Kansas. An Arkansas regulation has prohibited hunters for years from bringing a whole deer from out of state into Arkansas as a precautionary measure, he said.

The Gerhardts hunt a lot in Wyoming.

“They’ve had CWD for years, and they don’t get excited about it,” Chuck said, adding that the deer and elk hunting in Wyoming is superb. He thinks concern over the disease in Arkansas will decrease as the years pass.

Don McFarland, a resident of Johnson who hunts deer in several areas of Northwest Arkansas, said he thinks Game and Fish officials are being too conservative in their approach.

“If you look at all the other states that have had CWD for a lot longer than Arkansas, they do not have as restrictive regulations as Arkansas has enacted for this season. And a lot of these states are still destination states for hunters that want to shoot record class animals,” McFarland said.

McFarland said the regulation that will likely affect his hunting the most is not being able to take a deer carcass out of the Chronic Wasting Zone for processing, even though the disease has not been found near the area he hunts.

“I can’t shoot a deer in extreme western Madison County, on in-laws’ land, and just field dress the deer and then take it to West Fork to the butcher like I have always done,” he said. “I now have to skin the deer and then de-bone the deer so no bones or skull leave the area where it was shot.”

McFarland said the change might result in fewer deer being taken rather than more, which wildlife officials would like to see.

“I will think long and hard about pulling the trigger if it is on a Sunday evening almost dark, and I have to be at work on Monday,” he said. “It would have to be a big buck for me to have to be in woods until 9 p.m.or later to take care of a deer. In the past I could shoot and have it field dressed in about 15 minutes and be on my way.”

The Gerhardts don’t hunt in the 10-county zone, but Karen has a taxidermy business.

“We had a customer who killed a deer over there,” Karen Gerhardt said. “Chuck had to go meet him in Huntsville and skin (the skull) and bring it over here,” to comply with the regulations.

“I’ve had a few customers call about the regulations,” Karen Gerhardt said. “They all knew about them, but so many people don’t.”

Chuck Gerhardt added he thinks the rules are clear.

“People ought to be able to understand that when the rule says no bones, it means no bones.”

Mark Newton of Newton’s Processing in Harrison said carcass transportation restrictions will likely end up being a wash for his business.

Brett Aggus, owner of Southtown Sporting Goods in Springdale, said he hasn’t seen business fall off yet. They’re still selling plenty of bows and other hunting-related equipment, but there is some uncertainty about the effect of new regulations, particularly those involving feeding.

Feeding wildlife is prohibited within the 10-county zone.

“Long-term, we’re concerned about what we can sell. We buy in January to get the best deals,” Aggus said. “There is a little concern just because it’s here,” he said of the disease.

Chamber of Commerce officials in the Newton County town of Jasper said Thursday they haven’t noticed any effects so far.

“We haven’t had any complaints from our members or anything directly related to it,” said Diane Thompson, a volunteer with the chamber. “We haven’t had a slowdown in bookings at various cabins around here.”

The new regulations do allow baiting for the purpose of hunting Sept. 1 through Dec. 31, when more than 95 percent of Arkansas’ deer harvest takes place.

“Baiting is a useful tool to increase the harvest in these areas where we need to reduce deer density,” said Brad Carner, Game and Fish chief of wildlife management.

“We’re not going to eliminate deer, that’s not the intent. But it is to reduce the density. That’s one of our strategies.”

Landowners near Arkansas’s elk range in Newton and surrounding counties have also been asked not to put any feed or bait out because it concentrates deer and elk and can help spread the disease.

Game and Fish also increased the number of deer a hunter can kill by adding a doe. And, it dropped the rule that prohibited killing a buck with fewer than three antlers on at one side.

Hunters now can take up to six deer per year. Landowners within the management zone can apply for additional deer tags to harvest bonus deer. Samples from the heads of those deer must be submitted for disease testing but the meat can be kept.

“I understand that the Game and Fish wants people to take as many deer as they can,” said Milt Potee of Rogers. “I don’t know if I’ll be very helpful in that. If I get two deer, that’s plenty.”