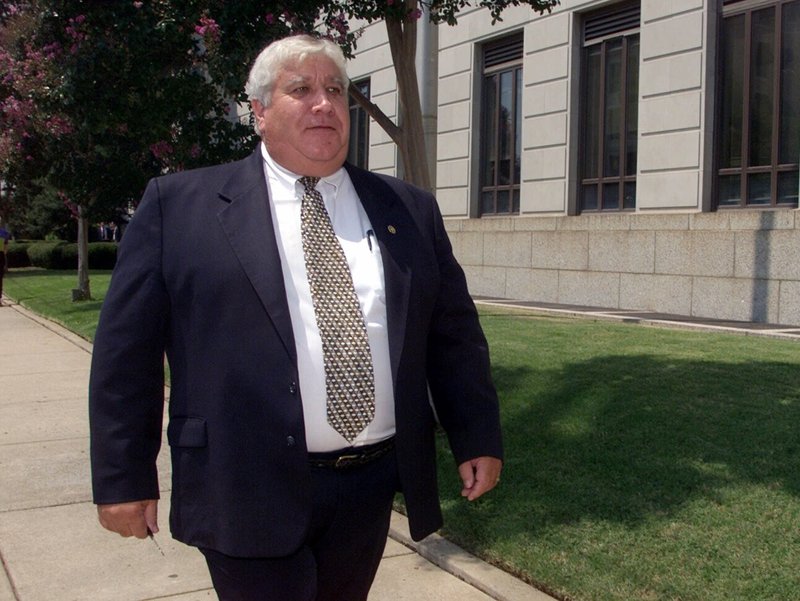 An occasional entry in the electronic docket for the federal courts in Arkansas can conjure up a long-forgotten saga that once captured the sustained attention of Arkansans.

But sometimes the glimpse into history also shows the unrelenting effects of punishment, even decades after the offender has served his time and seemingly slipped into obscurity.

Consider the case of Ron Webb, whose five terms as Independence County sheriff came to an end Jan. 1, 2001, as he prepared to serve a five-month sentence in federal prison for a civil-rights violation.

Despite the charge being a misdemeanor, Webb's case attracted repeated publicity as a stubborn judge waged a public battle with the 8th U.S. Circuit Court of Appeals in his efforts to avoid imposing a sentence that he thought was too steep.

The judge, U.S. District Judge Henry Woods, is now deceased, as is Webb's relentless defense attorney, Kent Rubens of West Memphis, but the punishment continues to be a burr under the saddle for Webb, who almost 18 years after his conviction, at age 69, still must report every 60 days as a registered sex offender.

"It's the craziest thing I've ever come across," Webb said Friday from his home in Newark.

Webb had been the sheriff for six years, and the county's circuit clerk for eight years before that, when a federal grand jury indicted him Dec. 9, 1998, on a charge of violating the civil rights of a constituent in the summer of 1997, while acting in his official capacity.

The constituent, who later publicly identified herself as Vickie Hawkins, said she went to Webb's Batesville office for help enforcing a restraining order against her estranged husband and that Webb promised to help her in return for sexual favors.

After a battered-women advocate relayed Hawkins' account to the FBI, Hawkins returned to Webb's office more than a month later wearing a recording device monitored by federal agents. On that visit, she said, the sheriff forced her onto a sofa, lay on top of her, fondled her breast and forced her to touch his genitals.

A federal jury convicted Webb in April 1999 on a misdemeanor charge of violating Hawkins' rights by sexually assaulting her. On July 20, 1999, Woods sentenced Webb to five months in prison and five months of home detention. Annoyed that federal sentencing guidelines required him to impose at least 10 months in prison, the judge tried to shorten the term by letting Webb serve half of his sentence at home.

Webb, then 51, appealed the sentence at Woods' urging in an effort to obtain a probation-only sentence, but prosecutors cross-appealed, resulting in the 8th Circuit ordering Woods in June 2000 to resentence Webb while considering whether force was used, and if it was, to increase Webb's sentence accordingly.

In August 2000, Woods found that no force was used and reimposed the same 10-month sentence, admitting that he was "kind of thumbing my nose" at the 8th Circuit.

But the government appealed again, and in June 2001, the appeals court demanded that Woods resentence Webb to 12 months in prison. Woods grudgingly resentenced Webb a month later, resulting in Webb having to return to prison to complete the yearlong sentence, of which he had already served five months and been released.

Meanwhile, a sexual harassment lawsuit that Hawkins filed against Webb and the county led to a $75,000 settlement with the county.

To the public, that was the end of the matter. But last year, 14 years after the ordeal was publicly put to rest, Webb filed a pro-se motion asking that he no longer be required to report to the Independence County sheriff's office every six months. The motion indicated that after his release from prison, he had to register with the state Department of Correction as a Level 1 sex offender, initiating a requirement that he report in with authorities every six months.

The requirement would apply in perpetuity, even on a misdemeanor conviction, unless Webb took advantage of a 1997 state law allowing Level 1 offenders to seek relief from the reporting requirement after 15 years.

"I am a good law-abiding citizen," Webb wrote, noting that he had never so much as received a speeding ticket before being convicted in the civil-rights case, which, he reminded the court, was a misdemeanor.

"If you read the statements Judge Henry Woods said at my sentencing," he added, "I think you will agree that I should not have to report."

Since Webb's original prosecutor had retired, the chief of the criminal division at the U.S. attorney's office filed a response on Jan. 8. In it, Assistant U.S. Attorney John Ray White wrote that the case was no longer in the jurisdiction of the federal court, so Webb would have to seek relief through the state.

White said the state law providing for termination of the registration obligation applies to offenders sentenced by an Arkansas court, through application to the "sentencing court." He said the law also has provisions for sex offenders sentenced in a different state, but "the Arkansas statute does not expressly provide for termination of the registration requirement if the offender was sentenced in federal court in Arkansas."

Because of that, White suggested that U.S. District Judge Kristine Baker, to whose court Webb's case was transferred after it was revived by his request, deny the motion. He also suggested that Baker recommend that Webb apply to the court of the county in which he resides, as the state law suggests for offenders sentenced in other states.

"The absence of any express reference to the role of a federal court in which a sex offender was convicted of an offense requiring registration results in some ambiguity in the statute," White wrote.

In a Nov. 15 order, Baker accordingly denied the motion and suggested that Webb petition a judge in Independence County.

He said it was his friends at the Independence County sheriff's office, where he has to report every six months, who told him about the law and suggested that he write the court to seek relief.

"All of them are friends of mine, and most of them are ones I hired," the former sheriff said. "It's been the most embarrassing thing I've ever come across."

He said that for 15 years, he has gone to the sheriff's office in Batesville twice a year to fill out a piece of paper and wait to get it signed. It is a constant reminder, he said, of an embarrassing ordeal, especially since "I had known that woman for 18 years, and I thought we were friends."

He said that over the years, before the instance in question, Hawkins regularly went to his office for help, and he would do what he could to help her.

Hawkins, whose whereabouts are unknown, could not be reached for comment. Webb said Friday that he never runs into her.

Webb, meanwhile, has remained married to Ann, his wife of almost 21 years. She was there with him in court when Woods resentenced him the first time in 2000.

Webb recalled Friday that the conviction and his sex-offender status "really hurt us."

"When I retired from sheriff, I was going to run for state Senate," he said. Instead, he ran a used-car lot for 14 years, and he and Ann are now both retired.

Webb still thinks about being sheriff again someday, saying he believes he could win if it weren't for his sex-offender status.

Print Headline: Ex-sheriff files for sentence relief; After 15 years, he asks to no longer report as sex offender