Christmas by the book 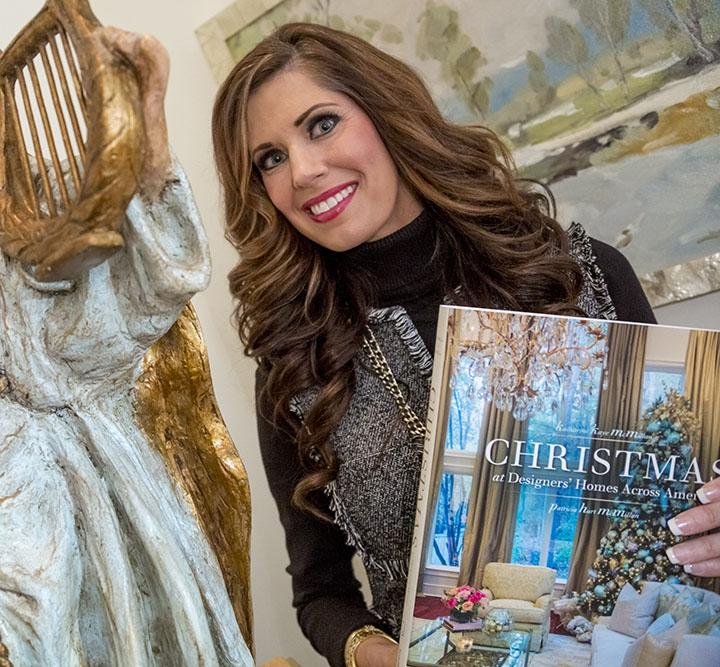 It's a coffee-table book whose authors' names Arkansans might not recognize, but it still has Arkansas all over it. 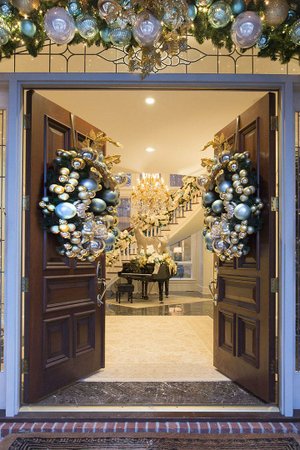 Photo by JANET WARLICK / Special to the Democrat-Gazette
Giant wreaths adorn the front double doors of the Little Rock home of Shayla Copas, whose living room graces the cover of the recently released book Christmas at Designers’ Homes Across America. Copas’ Christmas decor is also featured in a 12-page chapter in the book. 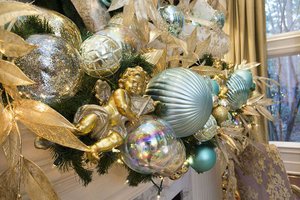 Photo by JANET WARLICK / Special to the Democrat-Gazette
A cherub — a decoration element favored by Shayla Copas of Little Rock’s Shayla Copas Interiors — highlights the Christmas decor in her home. 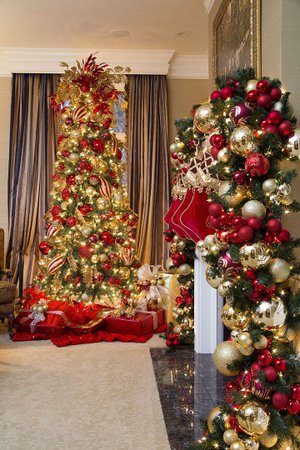 Photo by JANET WARLICK / Special to the Democrat-Gazette
Shayla Copas, who describes herself as “very diverse” when it comes to decorating for Christmas, creates a room in her home using traditional reds and golds. 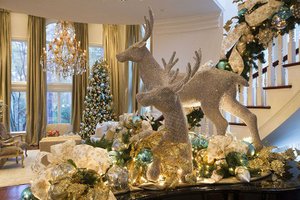 Photo by JANET WARLICK / Special to the Democrat-Gazette
Swarovski crystal-studded reindeer hold court on a piano in the Little Rock home of Shayla Copas. “I do like glitz and glamour; that is my style,” says Copas, of Shayla Copas Interiors. “So there’s lots of crystal and lots of cherubs. It’s just a very calming place to be, but very elegant.”

The jacket of Christmas at Designers' Homes Across America by Katharine Kaye McMillan and her mother, Patricia Hart McMillan (Schiffer Publishing, $45), features a high-ceilinged living room, highlighted by a Christmas tree. Room and tree are appointed simply, yet stunningly, in soft shades of light blue, gold and champagne.

It's the living room of Little Rock home interior professional Shayla Copas, who's known for how she dresses up spaces for the holidays.

Copas is one of more than 20 professionals, including the McMillans, whose Christmas decor makes up the chapters of the book. Copas' work stands alongside that of Christopher Radko -- he of the iconic heirloom Christmas-tree ornaments. Cecil Hayes, who's on Architectural Digest magazine's Top 100 list of influential designers in the world. Joe Ruggiero, host of the old HGTV show Homes Across America. Lance Jackson and David Ecton, founding partners of Atlanta interior-design firm Parker Kennedy Living.

In these page-turning home tours, Christmas decorations run the gamut -- elaborate and minimalist, traditional and quirky. A tree ornament may be a traditional round bulb or a nontraditional butterfly figurine. Tabletops and shelves are adorned with nativity scenes, reindeer, glass-domed winterscapes or a collection of garage-sale Santa figurines.

"People are not going to want to know about design philosophy or theory," says co-author Patricia McMillan. "It's not a how-to book. It's really a book about Christmas, which is a period of love -- expressions of love. And I think that the interior designers are really working to express love in everything they do. The whole object is to make America more beautiful."

The 12 pages featuring Copas' 2014 Christmas decor begins with a full-page photo featuring wreath-enhanced doors opening into her living room. A sweeping, freestanding staircase frames a pair of Swarovski-crystal reindeer, holding court on the grand piano. Piano and staircase are swathed in the light blue highlighted decor, as are the wreaths. Copas' story plays out on the opposite page, revealing her penchant for decorating multiple trees, each of which gets its color scheme from the room. Subsequent spreads reveal photos of the front door, the garland that frames it, and a close-up of those reindeer, shots of the tree and fireplace mantel, and another room featuring Christmas decorations in a more traditional color scheme.

"I do like glitz and glamour; that is my style. I wanted something elegant, and something that would pop," she says of the decor.

McMillan chimes in. "Shayla's room is a wonderful mixture of calm with sort of undercurrents of excitement so that you have to ... get into that space, walk into that space and sense that space. And I think you ... do it by looking at those images. You can easily feel like you're sitting on the sofa, chatting with Shayla."

Patricia McMillan, who has a long career in publishing and interior design in New York and is author of 15 books on design and architecture, says she found Copas through social media connections. Now a San Antonio design consultant, McMillan visited Little Rock to appear with Copas at a Nov. 1 benefit book-release dinner.

For the book, McMillan says, "I wanted designers from all across the country -- not just New York City ... because [New York designers] are so -- I can't think of another word -- incestuous. They just keep promoting one another. And so I said, 'There's more to America than New York City.'

"And then ... I met Shayla on Facebook. I saw her work; I thought it was stunning. I sent her an invitation." Concerned that Copas would wonder why this unfamiliar woman was contacting her, she sent her a picture of a clipping of her in USA Today.

"Anyway, she's very gracious," McMillan says of Copas. "And she said, 'Yes, I will be in your book.' And lo and behold, the book designer -- who works very independently and makes sure I know that [any photo chosen] is her choice ... said, 'I want this for the cover.' I looked at it, and it was Shayla's living room. I said, 'So do I.'"

As noted in the book, Copas was named one of Arkansas' 2015 Trendsetting Designers by At Home in Arkansas magazine. In 2014, the Holiday & Decorative Association recognized her work with the titles of Best Christmas Tree in the Nation and Best Christmas Wreath Design in the U.S. She's modest, however, about being included in the book. "I was in awe, and felt very honored that Pat would select me," she says.

Home ... for the holiday

It took Copas and her small team of decorators a week in November 2014 to transform her home for the holidays. After the decorations were up, she had photos taken, as is her custom. She had no idea that not long thereafter, McMillan would invite her to be part of the book and ask her to submit photos of her work.

"God blesses us in many ways, and that was one of them," Copas says. She sent McMillan her photographs, then they started the interview process to provide copy for her chapter.

"She asked each individual designer what our traditions are in our homes," Copas says. "I enjoyed very much answering those questions ... They're quite in-depth, which I loved because [she] really wanted to know about us and about how we, as a family, celebrate."

Copas, a mother and grandmother who lives with her husband, Scott, and dog Roxie, hosts a Christmas party each year. "Part of what we love to do is entertain during the holidays, and share that magic," she says. "That's what's so fun." For both Christmas and Thanksgiving, they invite not only their closest friends but guests from around town, including those new to Little Rock or those who don't have nearby family. "There's a different person that will end up at our table every year. ... We love to bring the holidays to everyone else by [them] coming to our home."

This year, she's taking a break from home decorating due to an out-of-town Christmastime trip. But -- like those sugar plums in the heads of the children in Clement Moore's beloved Christmas poem -- Copas' Christmas 2017 decor is already dancing in her head.

Thinking forward to next year, she says, "We're going to have a large Christmas party. I'm doing an angel theme for '17," she says.

Print Headline: Christmas by the book