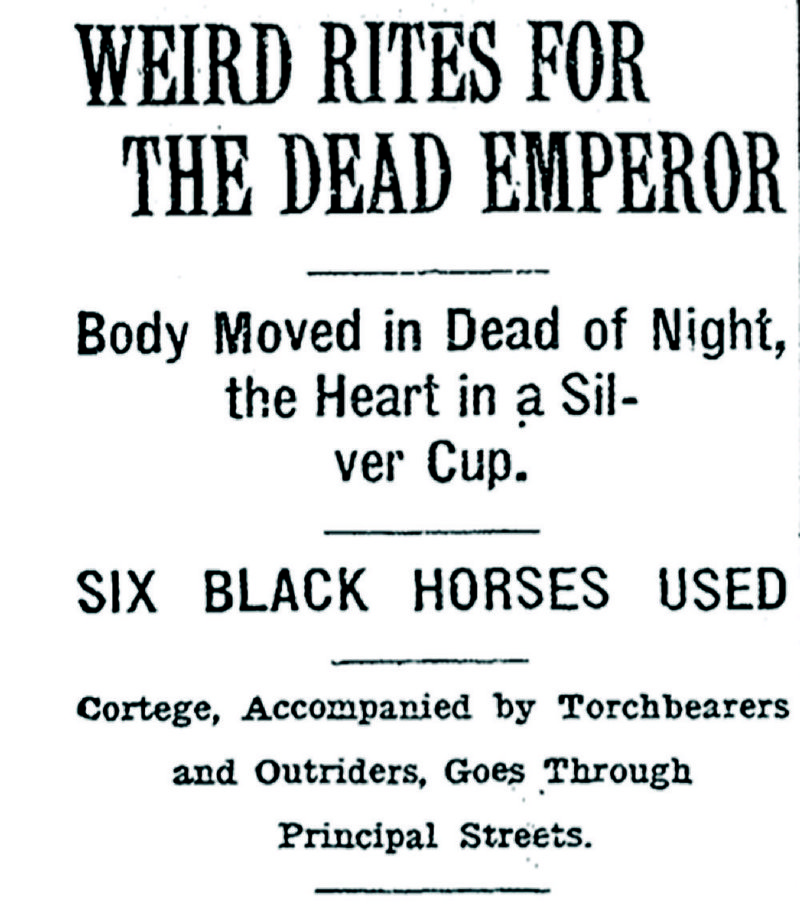 Headline in the Nov. 24, 1916, Arkansas Gazette after the death of Emperor Franz Joseph I of Austro-Hungary the world's oldest reigning monarch.

In my latest television crush, The Crown, the young Queen Elizabeth II awaits the day of her coronation with courageous reverence. Courageous, because she expects an ordeal by ecstasy during one moment of the rite: 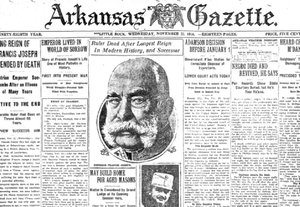 Page One of the Nov. 22, 1916, Arkansas Gazette with the death of Emperor Franz Joseph I of Austro-Hungary the world's oldest reigning monarch.

Poured into her hands, touched to her breastbone, dabbed upon her head, the application of holy oil will bring her into direct contact with the divine.

Before his coronation, her father had told her this anointing forever binds a British monarch to God, like priests and prophets.

Good Americans, even those of us who like a costume drama, don't believe kings necessarily speak for God.

With that in mind, let's return to our readings from the world as it was 100 years ago, as recorded in the pages of the Arkansas Gazette.

This week in 1916 brought the death of the world's oldest reigning monarch, Emperor Franz Joseph I, whose Austro-Hungarian state was fighting for survival in the Great War his alliances had provoked.

The Gazette published many stories about this hard-working monarch's death in late November. Well, rewind. The editors had been keeping an eye out for his demise all year. Imperial swoons and revivals were front-page news from January on.

For his actual death, the paper listed the ways it hadn't been so great to be him.

Emperor Lived in World of Sorrow

"His wife, 'the good Elizabeth,' was assassinated in Switzerland by an anarchist.

"His brother, Maximilian, was executed in Mexico.

"His only son, Rudolph, was a suicide.

"His sister-in-law, the Duchess d'Alencon, was burned to death at a charity bazaar in Paris.

"His favorite grandchild married against his wishes and her love ended in the shooting of her rival.

"The heir-apparent, Archduke Francis Ferdinand, and his consort were assassinated in Bosnia and the incident precipitated the great European war still raging."

Weird Rites for the Dead Emperor

"Vienna, Nov. 22, via London, Nov. 23 -- Death came to Emperor Francis Joseph as sleep to a child while the sovereign was reclining in an armchair in what he called his workroom. He refused to take to his bed and went to the end resting peacefully in his chair with his hands folded as if he were in prayer. ...

"Today the emperor's body lies on the iron bedstead on which he slept for the last two years. The body is covered up to the chest and upon the coverlet lies a great garland of flowers, placed there by the emperor's daughter, the Archduchess Marie Valerie."

Having assumed his throne in 1848 when he was 18 years old, the emperor made terrible mistakes in his lifetime but wasn't hated at home. By 1916 his "tall, gaunt figure was familiar to every Viennese." He rode through the streets unguarded.

Once, he deployed the imperial band to quell riots in Vienna: "All night the band played and the people danced and in the morning they went home to sleep off their anger."

The report continued, "As the emperor grew older and sadder he worked harder and permitted himself fewer recreations. A week of shooting each year and a few bottles of priceless Gastein to warm his chilling blood, a daily hour of gossip with Katharina Schratt, who held his affections to the last -- that was all."

Schratt was an aging actress; he left her a big pile of money in his will. Marie Valerie banned her from the death chamber.

His successor, Archduke Charles Francis Joseph, took control of the Austro-Hungarian state without festivities, but the dead emperor would be given his rites:

"This afternoon a death mask of the emperor was taken as a preliminary to the embalming of the body and its removal to the Hofburg [palace], where it will lie in state," Gazette readers learned. "The heart will be seated in a silver cup, while his intestines, lungs and stomach will be placed in a copper urn.

"The body must be transferred from the Schoenbrunn palace to the Hofburg in the dead of night drawn by six black horses. The cortege will be accompanied by torchbearers and the outriders also will carry torches."

"After them will come a squadron of cavalry and a part of the mounted guard. The hearse will be preceded by the court couriers, the lord steward and the court chamberlains in carriages drawn, each, by six horses."

The heart in its silver cup would travel in its own carriage, followed by his bodyguard, palace officials and soldiers.

The cortege would wind through the main streets of Vienna before fetching up at the Black Eagle stairs, where Emperor Charles would meet them and follow the body into the Hofburg chapel. The dead emperor would lie in state until Nov. 30 -- the final four days with the lid closed.

The government would grieve in a timed-release fashion:

"On the day of the funeral the monarchy will go into mourning for a period of six months, divided into three equal portions of the deepest mourning, deep mourning and light mourning. An order by the emperor, not as yet promulgated, will fix the duration of the court mourning and also the period during which the theaters and other places of amusement shall remain closed."

(I like this provision for a "light mourning." Many of us could put it to use today.)

On Dec. 28, 1916, the Gazette described the plan for his entombment in the imperial vault at Vienna's Church of St. Mary of the Angels, aka the Capuchin Church:

"At the burial in the crypt of the Capuchin, a historic ceremony will be carried out which was anciently designed to impress the monarch's successor that in spite of all pomp, a sovereign is merely mortal.

"The funeral procession will be halted at the entrance to the vault by a challenge from within, 'Who is there?' The reply will be made: 'His most serene majesty, the Emperor Francis Joseph.'

"The challenger will then reply: 'I know him not.' Responding to a second challenge, the announcement will be made: 'The emperor of Austria and apostolic king of Hungary is outside.'

"Again the challenger will answer: 'I know him not.'

"When for the third time the voice within asks who demands admission the master of ceremonies will reply: 'A sinful man, our brother Francis Joseph.' The portals will open."

Next Week: Judge Gerlach Is Placed on Trial