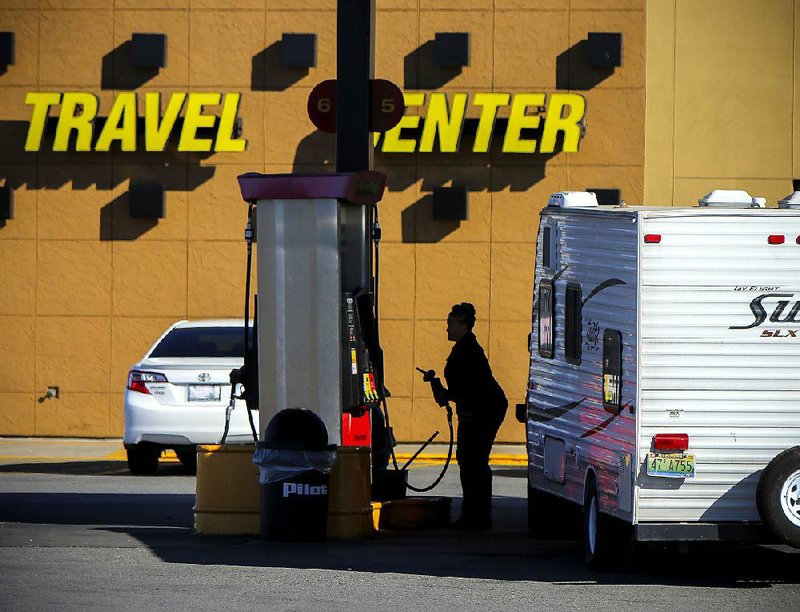 A traveler pulling a trailer with an Alabama license plate fi lls up Saturday at a Pilot Travel Center off Interstate 40 in North Little Rock. Highways and airports are starting to fi ll up with Thanksgiving travelers.

Cheap fuel prices and an improving economy are encouraging 48.7 million Americans to jump into their cars or onto planes this week, making it the busiest Thanksgiving travel rush in nine years.

The estimate from AAA, the North American travel services company, said the number of Americans traveling is a 1.9 percent increase over 2015 and the most Thanksgiving travelers since 2007.

"The economy is the real driver this year," said Mike Right, a spokesman for AAA in St. Louis. "We haven't seen these kind of numbers in eight or nine years. Unemployment is better, consumer confidence is rising, and personal income is up a little bit."

The state's largest airport, Bill and Hillary Clinton National Airport/Adams Field, had no estimates last week on the number of passengers expected to go through Little Rock's airport over the Thanksgiving holiday, but airport officials said the ticket counters and concourse will be busier than normal.

They expected Friday, with its mix of business and leisure travelers, to be the airport's busiest day of the holiday period, but a spokesman said the number of passengers also is expected to be up Monday and Tuesday, as well as on the days after Thanksgiving Day.

"You won't see the large lines that are at large-hub airports, but we tell everyone to arrive an hour and a half before your flight," spokesman Shane Carter said. "Airlines require everyone to be at the gate 30 minutes before their flight."

Also, he urged travelers to review travel tips from the Transportation Security Administration to familiarize themselves with what they can or cannot carry through security checkpoints. The airport has posted a link to the tips on its website, fly-lit.com.

But most of this week's travelers will be in vehicles going to see relatives and friends. The AAA survey put that number at 43.5 million, or nearly 90 percent of holiday travelers.

For almost two years now, American motorists have benefited from some of the lowest gasoline prices in a decade, and that's not about to change, said Tom Kloza, chief oil analyst for gasbuddy.com.

"It's going to be another cheap Thanksgiving," he said.

Some service stations in Arkansas are selling gasoline even cheaper than the state average. For example, in Fort Smith, gasoline can be found as cheap as $1.55 and $1.58 a gallon, according to gasbuddy.

Low gasoline prices are the result of an oil market slump that has persisted since 2014. Crude oil, before 2014, traded at above $100 a barrel. Prices fell because of an abundant supply and weak demand.

Recently, oil prices have been volatile, stemming from doubts that members of the Organization of the Petroleum Exporting Countries will agree and adhere to a production cut at their Nov. 30 meeting.

Until a few months ago, the cartel had refrained from agreeing to a production cut, abandoning a traditional practice of adjusting output in response to prices.

"I think the fact that the price has been stubbornly in the mid-40s is kind of encouraging OPEC to do something," said Michael Lynch, president of Strategic Energy and Economic Research Inc.

"I think they'll reach an agreement. I think the question whether they will adhere to it is a pretty good one," he said.

While an agreement by OPEC would give oil prices a small lift, analysts say U.S. consumers can expect to see low gasoline prices for the rest of the year.

"This year, we're on course where we're going to spend about $300 billion on motor fuel, and that's going to be about $175 billion less than we spent three years ago," Kloza said. "It continues to be the cheapest year for fuel prices since 2004."

U.S. consumers continuing to save on gasoline is good news for retailers. The Christmas shopping season will kick off this week. Many retailers, including Wal-Mart Stores Inc., will be open Thanksgiving Day.

In recent years, retailers have begun to offer their door-buster deals, normally reserved for Black Friday, earlier and earlier. Black Friday, traditionally the day after Thanksgiving, is when retailers start to turn profits.

Shoppers are expected to have bigger holiday budgets this year, thanks in part to the low gasoline prices. Consumers will spend an average of $1,121 each this Christmas season, up 10 percent from last year, according to PricewaterhouseCoopers 2016 Holiday Outlook.

On the whole, U.S. consumers are expected to spend up to $655.8 billion this Christmas season, up 3.6 percent from last year, according to the National Retail Federation.

The "gas prices we are seeing right now, while low, are not so different in the eyes of consumers that they are going to have some kind of conscious behavior change," said Kathy Deck, director of the Center for Business and Economic Research at the University of Arkansas at Fayetteville.

But, she said, low gasoline prices coupled with low unemployment and higher wages bodes well for the Christmas shopping season.

"All of those things mean it's probably going to be a reasonably good holiday season," Deck said.