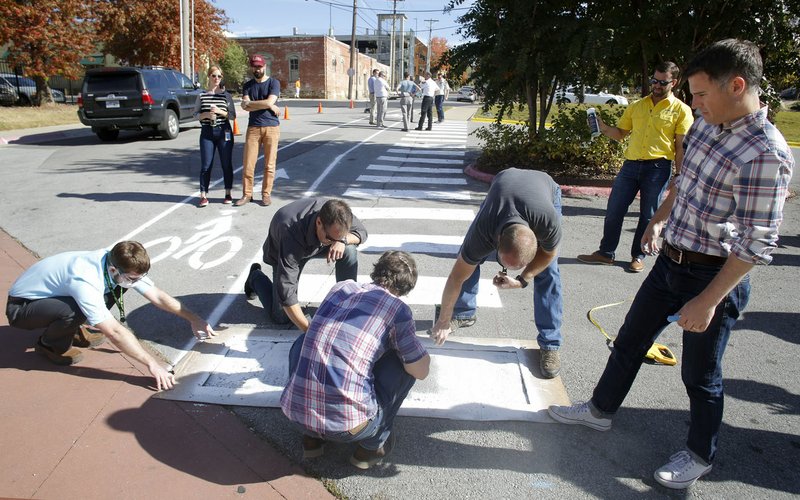 Mike Lydon (right), with Street Plans Collaborative of Miami, Fla., holds a stencil in place Thursday as the last part of a crosswalk is painted on Spring Street in Fayetteville.

FAYETTEVILLE -- Emily Calvert and Kelsey Van Housen saw something they didn't expect Thursday afternoon as they walked their Shetland sheepdog, Kipper, along the Razorback Greenway near Nadine Baum Studios.

Urban design firm Street Plans picked Fayetteville among five other cities to host workshops coinciding with development of its Tactical Urbanist’s Guide to Materials and Design. The workshops were made possible through money from the John S. and James L. Knight Foundation.

For more information on Tactical Urbanism, go to:

The group took part in a Tactical Urbanism workshop hosted by Miami-based firm Street Plans Collaborative. The idea was to show how street designs can go quickly from an idea to reality without jumping through administrative hoops. The group took an hour to lay down about 90 feet of crosswalk and bike lane using stencils, temporary chalk, measuring tape and rope.

"I feel like it kind of fits in with the Fayetteville vibe of people taking action and doing things," Calvert said. Van Housen was glad to see so many city employees taking a proactive approach to planning.

The concept was born out of the 2008 recession, said Tony Garcia with Street Plans. People moved back to the city soon thereafter and wanted things in their neighborhoods that cities couldn't economically provide, he said.

"Part of it is poking the bear," Garcia said. "You want to elicit some sort of response."

Bentonville, Bella Vista and Rogers are in the midst of a pilot program, BikeNWA, that Street Plans also has taken on. The Walton Family Foundation donated $30,000 so residents in those cities could plot temporary bike lanes, flower-filled medians, pedestrian crossings, curb extensions and other street features.

The foundation has focused on ways to preserve a sense of place, said Ryan Hale, home region program officer. The foundation partnered with the Northwest Arkansas Regional Planning Commission, the Bikes Coalition of the Ozarks and city officials to explore how on-street infrastructure can promote that concept, he said.

"You can see something on paper, but when you're actually able to experience it, it takes on a whole new meaning," Hale said.

The installations in Benton County will come down in December, said Paxton Roberts, executive director of the Bikes Coalition of the Ozarks. The coalition wants to bring a similar pilot program to Fayetteville, Springdale and Siloam Springs.

"This isn't just about bikes or people walking," he said. "This is about creating a better neighborhood and making a safer neighborhood for our children."

The city doesn't want people to start chalking up their neighborhoods when they want a crosswalk, Planner Quin Thompson said. If a temporary measure is successful then the city can take on a permanent project.

"The purpose is to encourage people to set the bar really low for trying new things so there's not such a dramatic two-year process that costs $75,000 or $150,000 to try something that might not work," he said.

Many of Fayetteville's streets double as state highways.

A previous version of this story incorrectly described the Fayetteville roads comprised by Arkansas 265. The erroneous information has been removed.

District Engineer Chad Adams with the Arkansas Highway and Transportation Department discouraged anyone from taking matters into their own hands by doing anything to a highway right of way.

A car could hit pedestrian if a crosswalk suddenly emerged in a bad location, Adams said.

"Whoever painted that out there would probably have some sort of liability," he said. "From a department standpoint, we want to be able to review such requests and determine if they're warranted or if they're in the best location."

Residents should direct their requests for a crosswalk to their city and city staff will contact the Highway Department. The department recently approved a pedestrian crossing on College Avenue in between Rebecca Street and Trenton Boulevard.

Alderman Matthew Petty said taking a Tactical Urbanism approach greatly lessens the chance of the city investing money in a project only to find problems later, such as a trash truck that can't make its way through. It's a way for the planning staff to explore new ways of doing things, he said.

"We didn't pay an engineer today," Petty said. "In less than an hour we installed a crosswalk and a bike lane. That's an hour from concept to execution."