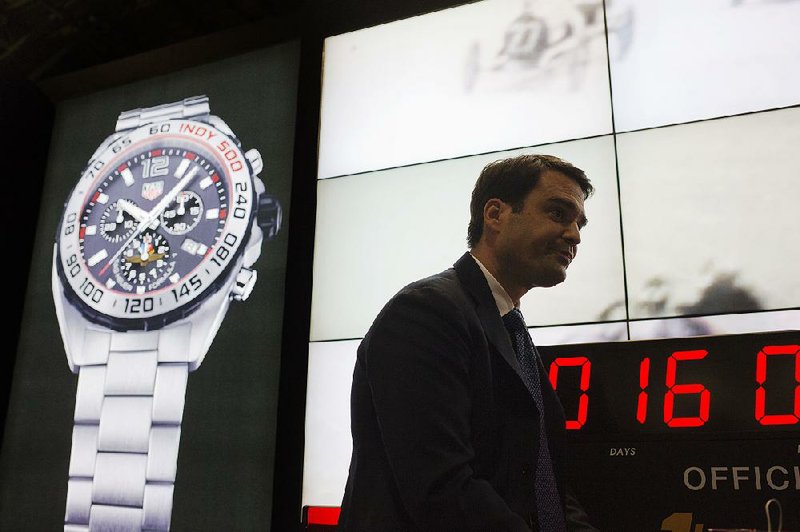 As Swiss watchmakers struggle with the strong franc, weaker Asian demand, and new technologies such as smartwatches, the last thing they need is a threat from within their ranks. But that's exactly what's happening.

The Goldgena Project, led by designer Claudio D'Amore, is a shoestring-budget brand that's open to using non-Swiss components for mechanical watches. Asian parts make production cheaper, and most watches sold under the "Swiss made" label for less than $2,500 contain some bits from that region anyway, he said.

Swiss made is an official government designation certifying that a timepiece is mostly made of parts manufactured and assembled in Switzerland. This distinction is given hefty import in the industry.

"Swiss made is a joke," D'Amore, 40, said in an interview in his Lausanne office. The Swiss-Italian has spent 13 years designing watches for brands such as Tag Heuer, Parmigiani Fleurier, and Montblanc.

Goldgena is testing whether consumers are still interested in Swiss-designed watches, without all the glamour hidden inside. Figuring it can cut the price of a timepiece by more than half, the brand plans to sell automatic watches for as little as $700, compared to the $4,000 starting price for Rolex models. By using a Japanese movement, Chinese assembly, and avoiding middlemen, Goldgena said, it can undercut the industry.

Watchmakers are allowed to call their timepieces Swiss made if at least half the value of the timepiece's movement comes from Switzerland and if the watch is assembled in the country. Next year, new rules will require that at least 60 percent of the manufacturing costs of the entire watch, including the strap and case, are Swiss.

The country's four-century-old watch industry has been suffering recently. Exports have dropped for 10 months. Switzerland makes about 2.5 percent of the world's watches each year, but it gets more than half the revenue in the $38.2 billion market because Swiss made timepieces command higher prices, according to Rene Weber at Bank Vontobel.

Three companies make the majority of Swiss watches: Swatch Group, whose brands include Omega and Longines; Richemont, which makes Cartier and IWC; and Rolex, which also makes Tudor.

Competition is increasing just as smartwatches sap demand for lower-end watches. Websites such as Borrowed Time have popped up, lending people luxury watches to wear to parties. Swatch shares have slumped 27 percent in the past year, while Richemont's stock is down 34 percent.

D'Amore plans to raise money through crowdfunding and hopes to garner some $10 million by the end of September in order to make 5,000 to 10,000 pieces, which he'll sell online. The first models are planned for next year. Without much of a budget for advertising, D'Amore has taken to the Internet in an attempt to attract consumers with punchy YouTube videos. One shows a scene from the Clint Eastwood western A Fistful of Dollars overdubbed with dialogue that reflects the project's rebel tone.

Goldgena is surveying consumers to see if they would be interested in cheaper non-Swiss made watches.

So far, 63 percent of website visitors have voted for Swiss made, in proportions of either 50 percent or 99 percent. Still, 348 out of the 947 have said no, which shows there may be consumer demand for an Asian-assembled automatic watch. Goldgena will wait a few weeks to gauge consumer interest before it makes a decision as to which route to follow. D'Amore said he'd prefer the non-Swiss made route.

Goldgena's watches would most likely pressure entry-level brands with a price tag of $500-$2,000, according to Edouard Meylan, chief executive officer of H. Moser & Cie., whose watches start at $15,000.

"The risk is not so big, as I don't think that many customers will see and assimilate the Goldgena Project," he said. If the upstart brand does succeed, however, it could force some other brands to consider abandoning the Swiss made label.