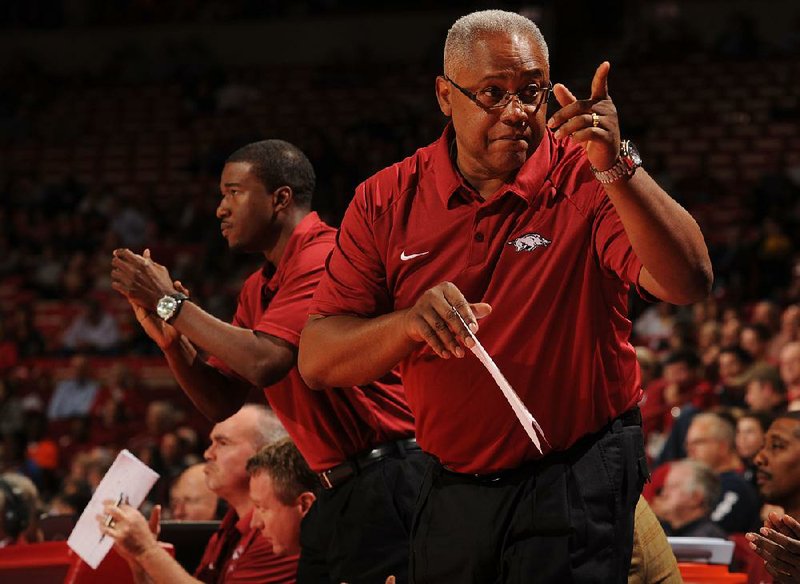 Melvin Watkins (front) and T.J. Cleveland (left), who have been assistants for Arkansas Coach Mike Anderson for 10 and 14 years, respectively, will remain in their roles despite Anderson’s addition of former Razorback Scotty Thurman to the coaching staff.

FAYETTEVILLE — Arkansas' three full-time assistant coaches will have a combined base salary of $745,109 next season, according to contracts obtained Thursday through an open records request.

Newly-hired assistant coach Scotty Thurman is in line to make $170,814, according to his contract. Thurman began his new position on April 13 but it was not formally announced until May 11, one week after he signed his contract.

Watkins' contract with the university is worth $338,481. He is paid an additional $35,000 by the Razorback Foundation as part of a personal services agreement.

Matt Zimmerman, a former full-time assistant who was reassigned to become the program's director of operations, is in line to make $111,287 next season.

Jeff Daniels, who was reassigned from director of operations to director of student-athlete development, is in line to make $111,120.

All salaries are above the most recent line-item maximums made available by the Arkansas Department of Higher Education. Remaining salary funds are covered by the Razorback Foundation.