No first-strike nukes unless threatened, willing to talk with South, he says by Eric Talmadge The Associated Press | May 8, 2016 at 3:19 a.m.

PYONGYANG, North Korea -- North Korean leader Kim Jong Un said during a critical ruling-party congress that his country will not use its nuclear weapons first unless its sovereignty is invaded, state media reported today. 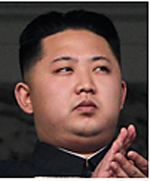 Kim also said he is ready to improve ties with "hostile" nations in a diplomatic overture in the face of international pressure over its recent nuclear test and long-range rocket launch.

He also called for more talks with rival South Korea to reduce misunderstanding and distrust between them and urged the United States to stay away from inter-Korean issues, according to the official Korean Central News Agency.

He said that North Korea "will sincerely fulfill its duties for the nonproliferation of nuclear weapons and work to realize the denuclearization of the world."

The North is ready to improve and normalize ties with countries hostile to it if they respect its sovereignty and approach it in a friendly manner, Kim said.

At the congress, Kim also announced a five-year plan that begins this year and seeks to develop the North's dismal economy. Kim identified improving the country's power supply and increasing its agricultural and light-manufacturing production as critical parts of the program, the news agency reported.

Analysts have anticipated Kim would use the first Workers' Party congress in decades to propose talks with rivals to exploit what he considers to be increased leverage as a nuclear power.

North Korea carried out its fourth nuclear test in January and followed with a satellite launch in February that was seen by outside governments as a banned test for long-range missile technology, earning worldwide condemnation and tougher U.N. sanctions.

The North responded to the punitive measures and also to the annual U.S.-South Korean military drills in March and April by firing missiles and artillery shells into the sea. It also claimed advancements in developing nuclear weapons and long-range missiles, and combined them with threats of pre-emptive nuclear strikes on Washington and Seoul.

Analysts said that the North's belligerent stance might have been intended to rally the North Korean people around Kim ahead of the congress and also promote military accomplishments to the domestic audience to make up for the lack of tangible economic achievements to present at the party meeting.

South Korea has taken a hard-line approach to North Korea after its nuclear test and long-range rocket launch, shutting down a jointly run factory park in a North Korean border town that had been the last remaining symbol of cooperation between the rivals and slapping Pyongyang with its own economic sanctions.

Seoul also has been in talks with Washington on deploying a U.S. missile-defense system in South Korea.

North Korea had spent the past months resisting talks with the South and threatening attacks against it, but Kim spoke with a different tone at the conference. He said "fundamentally improving" inter-Korean relations was an urgent matter for his government and also called for the South to "hold hands" with the North as a "companion" for unification, the news agency said.

However, Kim stressed that the South must first employ practical measures to improve ties and throw out laws and institutional systems that have hampered them. He also said that the United States should no longer be involved with matters in the Korean Peninsula, and that if enemy forces "ignite the fire of war," the North is ready to mercilessly punish the aggressors and accomplish the "historical feat" of unification.

North Korea has long decried the 28,500 U.S. troops stationed in South Korea as a buffer against possible aggression.

South Korea's Foreign Ministry said ahead of the North's ruling-party congress that the priority of any future talks with the North would be its denuclearization.

Some North Koreans said they were following the congress on television.

"I saw the congress last night on TV when I was at home with my family," Pyongyang resident An Myong Hui said Saturday. "Because it's the first one in 36 years and because Marshal Kim Jong Un was there, it made me feel really emotional."

All of the previous six congresses were convened by Kim's grandfather, national founder Kim Il Sung. The last one was used to formally announce Kim Jong Il as the second heir to power in the North's Kim family dynasty.

Kim Il Sung died in 1994, and Kim Jong Il -- who rarely spoke in public -- never called for the convening of a congress, though on paper one was supposed to be held every five years.

Information for this article was contributed by Tong-hyung Kim, Matthew Pennington and Lolita C. Baldor of The Associated Press.