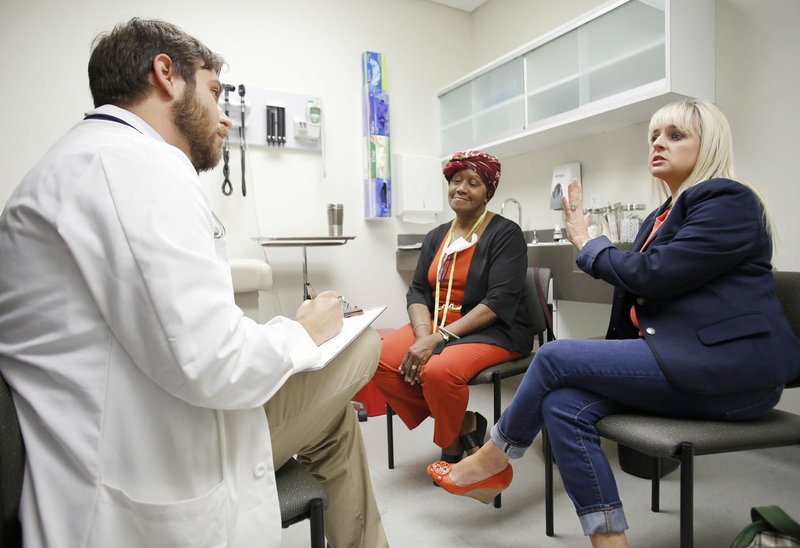 Casey Dye (from left), a senior medical student at University of Arkansas for Medical Sciences Northwest, participates in a mock Alzheimer’s consult with Betty Anderson and Mandy Gittins, both standardized patients March 15 on the campus in Fayetteville. - Photo by David Gottschalk

FAYETTEVILLE -- Catherine Tully, a disheveled woman in her late 60s, goes to the doctor only to humor her son and daughter-in-law. 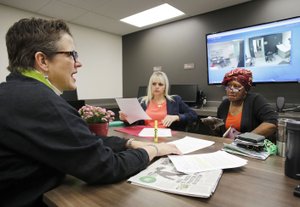 Photo by David Gottschalk
Mary Cantrell (from left), executive director of the Center for Simulation Education at the University of Arkansas for Medical Sciences, discusses a mock Alzheimer’s consult with Mandy Gittins and Betty Anderson.

They worry she is experiencing early signs of dementia and Alzheimer's disease.

The Centers for Simulation Education, part of the University of Arkansas for Medical Sciences, are recruiting adults to simulate medical cases for students training to be doctors, nurses, physical therapists and pharmacists. The basic requirements for standardized patients are:

• Train to be consistent and realistic in portraying medical cases and in completing assessments of medical students.

• Record what happens, reproduce patient histories and physical problems, and give feedback.

• Do not make judgments about medicine and are not subject to invasive medical procedures or simulations of surgery.

• Apply, and once hired, are contract employees of UAMS.

The women who portray Tully and her daughter-in-law are standardized patients, people who simulate patient's symptoms in clinical exercises for medical students.

The women are playing the role for medical students at the University of Arkansas for Medical Sciences in Fayetteville, said Cantrell, executive director of the Centers for Simulation Education at UAMS here and in Little Rock.

Medical students interview Tully and her daughter-in-law about the history of the complaint, use appropriate screening tools to evaluate Tully's memory loss and discuss the problem with the patient and her family.

The monthly encounter in Fayetteville takes place at the Pat and Willard Walker Student Clinical Education Center at the University of Arkansas for Medical Sciences satellite campus in Fayetteville.

The Fayetteville program involves more than 60 people, Cantrell said. Cantrell is working to establish a core group of 100 standardized patients in Northwest Arkansas, she said. She needs adults who are willing to use their bodies to teach medical students how to do pelvic, breast and prostate exams.

The final straw that lead to Tully's trip to the doctor's office is a kitchen fire she doesn't remember, Cantrell told Betty Anderson, who played Tully this month in visits with two senior medical students nearing the end of a rotation in internal medicine.

Cantrell reminds Anderson, 66, of Lincoln, that Tully becomes upset toward the end of the doctor's visit and says, "You're not going to put me in a nursing home."

Cantrell remembers a physician asking her in the late 1980s if she could fake illnesses for some medical students. She was a single mom with an acting background.

"Of course I can. How much does that pay?" she remembers asking. "I became known as the actor whom they called."

Cantrell coordinated standardized patients out of her living room for a few years until the university hired her to be the first full-time coordinator in 1992, she said. The Centers for Simulation Education now operate in facilities that mimic medical rooms in Little Rock and Fayetteville. Simulation education also includes exercises with full body mannequins.

Standardized patients, who earn an average of $15 per hour on a part-time basis, are trained by university faculty to portray actual patient cases for third- and fourth-year medical students, Cantrell said.

Standardized patients give feedback only on how they feel, including if they were respected as a patient, during the exam, Cantrell said. They comment on whether the medical students displayed nervous habits or appeared confident.

The practice of training people to simulate illnesses originated in 1963 with the late Dr. Howard Barrows, a neurologist who was a faculty member at the University of Southern California, according to the Association of Standardized Patient Educators. He thought the training should cover not only medical history, but the behavior, personality and emotions of the people represented in the case. The idea was for the simulated patient to appear as a real patient to a trained clinician.

The use of simulated or standardized patients grew gradually, according to the association.

Standardized patients have become more important in the education of medical students because of federal patient privacy laws, Cantrell said.

The day Anderson and Mandy Gittins, 38, of Rogers, portrayed the case of Tully and her daughter-in-law, they met early in the morning to review their roles. Tully needed to appear disheveled, so Anderson found a sewing tape measure to drape around her neck and tucked a tissue in the top of her neckline.

They settled into a patient room just before 9 a.m. on a Tuesday. The first medical student to treat Tully was Casey Dye, a 34-year-old senior medical student who wants to become an emergency room physician.

Dye greeted his patient. "I'm one of the clinic physicians. Who's here with you?"

Anderson, as Tully, responds, "This is my daughter-in-law."

Dye asks Tully if she is comfortable with her daughter-in-law being in the room. Dye asks Gittins, now playing Maryanne, about the problem.

"Mother has just been a little more forgetful than usual," Maryanne says.

Dye asks how long this has been a concern, when Tully interjects, "I'm fine."

"You haven't been feeling like you've had any memory loss?" Dye asks Tully, who says again says she is fine.

Maryanne says the concerns have been ongoing for about two years. Tully's bills have piled up. More recently when a delivery man brought a package to Tully, he called 911 after smelling smoke in her house. Tully forgot to turn off a burner on the stove.

Dye asks Tully about what Maryanne has described.

Tully throws up her hands. "Everything's fine. I don't know what you're worrying about."

Dye discusses Tully's daily activities with Tully and Maryanne. He shifts the conversation back to the reason for the visit and the concerns of Tully's family.

Dye then asks Tully to do some testing for him. She has no problem with math problems or recounting the names of animals -- she tells him she watches the Discovery Channel -- but she remembers just one of five objects Dye asked her to remember.

"All I can remember is apple," Tully says. "Maybe it's because I'm hungry."

Tully listens but has one more concern: "You're not going to put me in a nursing home."

Maryanne and Dye assure Tully they want her to remain independent. Dye suggests Tully consider having more help, including having someone with her when she is cooking.

"I had had some experiences with doctors I think would have benefited from having a standardized patient," Anderson said.

Anderson has an acting background, including an uncredited role in the 1996 movie Sling Blade. She played the part of Mama in a 2014 production of The Bluest Eye at the University of Arkansas.

Anderson has been a standardized patient for a variety of scenarios, including for teaching breast exams.

Gittins was at home with a baby when she learned about the standardized patient program. Her acting experience is limited involvement in theater in high school.

The program provided a way for her to get out of the house, she said. She's now been a standardized patient for four years.

Gittins prepares for her roles by reading through her script and rehearsing. Some cases take a night to prepare while others take several days.

Some cases are difficult, Gittins said. She is normally an upbeat person, but one case required her to play the role of a patient with a brain tumor.

"I really had to focus on being in pain because I wasn't in pain," she said.

When standardized patients have heavy roles, they are monitored after the sessions are over, Cantrell said. Some will experience headaches, and others need time to switch their minds from pretending to be sad or depressed.

"We make sure to have chocolate to eat, tell a joke," Cantrell said. "We make them stay awhile just so they get out of it."

Medical students know standardized patients are acting, Dye said. He tries to focus on the real concerns each standardized patient portrays. In Tully's case, many older adults worry about losing their memory and are concerned how that will affect their independence, he said.

Gittins and Anderson complimented Dye for making sure Tully was comfortable with the doctor examining her with Maryanne in the room.

"Very rarely did you ask her a question, you asked me," Anderson said, referring to Tully. "That was critical. You stayed focused and kept putting forth the effort to maintain my attention."

Anderson offered one suggestion for Dye to be straightforward in discussing tests on Tully's memory. He should tell the patient the test is for her and the reasons for the test.

"That's good to let me know you're walking through this along with my family," Anderson said. "It is for me."