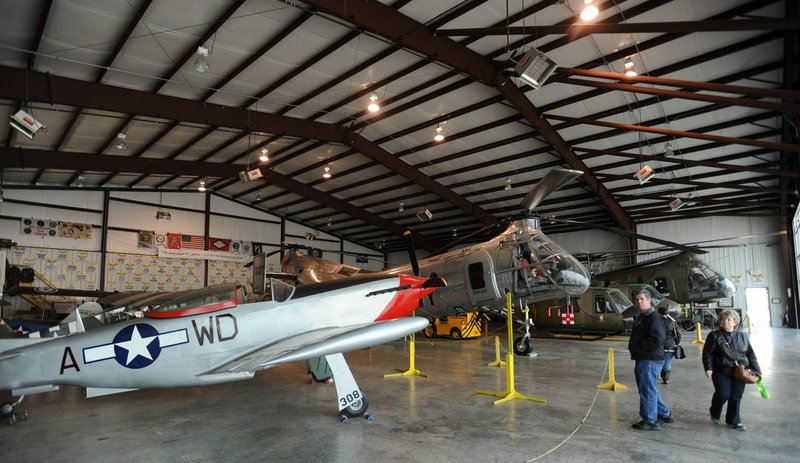 Visitors check out a P-51 Mustang replica Saturday at the Arkansas Air and Military Museum in Fayetteville. The museum is planning a fundraising effort in the coming months to fund repair and renovation of its World War II-era wooden hangar and to connect its two main buildings. - Photo by Andy Shupe

FAYETTEVILLE -- The leaders of the city's municipal airport plan to improve and expand its buildings and runways in the next few years, and its director said he sees potential for more flights.

Johnny Roscoe, Drake Field director, in recent weeks told airport board members and city officials projects to rehabilitate all the roofs and convert the field's lights to energy-saving LEDs should begin or continue this year. A project to widen the taxiways that connect loading areas to the runway could happen in the next few years.

To learn more about Drake Field and the Arkansas Air & Military Museum, go to www.fayetteville-ar.gov/1375/Airport

The Arkansas Air and Military Museum at the airfield also plans a fundraising campaign to expand and renew its World War II-era home.

The city-owned, self-sustaining airport sprawls over a few hundred acres at Fayetteville's southernmost end and provides service for private and chartered flights. Last month Roscoe said those flights could expand, but demand is too low to expect anything like the Northwest Arkansas Regional Airport.

"We get this every once in a while: 'Hey, can I go down there and catch my American flight or Delta flight?' Maybe someday, but probably not for a long time," Roscoe told City Council members during a council agenda session. More likely are smaller commuter or on-demand flights, he said, adding, "I think those will come and thrive."

More flights would be a welcome change at the airfield, where fuel sales and flights have slowed in the past decade, according to information presented to the board Thursday. Last year the airfield handled about 22,000 flight operations, down more than one-third from 2014 with the closure of SkyVenture Flight School. But Southern Eagle Aviation has come in with a smaller flight school, and fuel sales of about 350,000 gallons annually have held steady in the past few years.

About two-thirds of the airport's $2 million in yearly revenue comes from those fuel sales, with hangar and terminal rentals and state and federal grants rounding out most of the rest.

The air museum could use some work, too, treasurer Ray Boudreaux said Friday. The museum's main building is a Quonset hut that's been around since 1943, when the military trained civilian pilots there for the war effort, Boudreaux said. Its ceiling is the original wood used because metal was scarce.

"It needs some TLC," Boudreaux said, adding the museum also has hopes to connect its three buildings, which showcase a century's worth of civilian and military aircraft. A fundraising drive could come this summer.

"What we'll do is raise what we can and do what we can," Boudreaux said.

About 15,000 people go each year to the museum, which Boudreaux called a "jewel" of local and aviation history.

Roscoe said the roof project at the airport is his highest priority. The buildings have simply reached the point in their lifespans to need the work, plus there's some recent storm damage, he said. The cost isn't certain yet because the airport is going back and forth with its insurer on the cost.

Last year the terminal apron, or plane waiting area, was redone, as were LED lights in the ramp onto the runway. This year the runway's lights will be switched out largely using $400,000 from the Federal Aviation Administration. The change should save thousands of dollars a year in energy, city sustainability director Peter Nierengarten said last month.