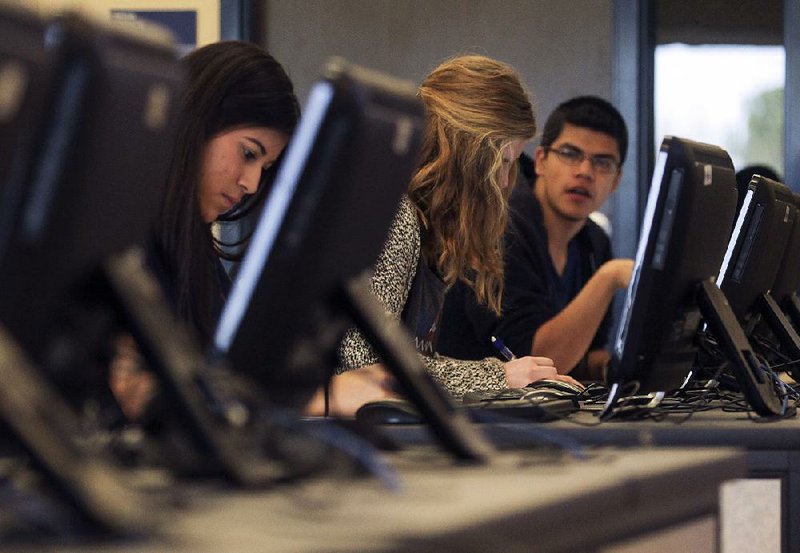 Texas was the first state to require that all high schools teach computer science, but Arkansas schools catapulted ahead in the past year after a mandate from the governor backed by millions in funding, said state and national advocates. 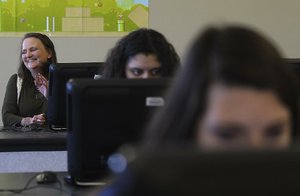 In Texas, a single state school board member pushed to require high schools to teach the classes. But few schools are following the policy and Texas has put up little if any state money to train teachers.

In Arkansas, Gov. Asa Hutchinson made computer coding a state priority and pushed a bill to provide funding for teacher training and to mandate that high schools offer the courses. It also requires that the classes count as math or science credits instead of an elective.

"I first presented this very, very early in [the campaign for governor]," Hutchinson said in an interview Friday. "The skepticism was palpable in the audience. You could see it on their faces.

That's part of why Noemy Sotelo, a junior at Bryant High School, and others like her are able to take coding classes throughout the state.

On Wednesday, Sotelo sat behind one of 30 computers in a 9 a.m. class taught by Brenda Qualls.

The Advanced Placement class was structured more like a college course than a typical high school class. Keyboards clattered as students opened programs and typed notes. Students were free to shout out questions and comments.

"It's like a puzzle to solve. It's like a game -- really cool, really interesting," Sotelo said after class. "You have to think about it. Figure out the solution."

This was Sotelo's second programming class. She plans to take a third next year -- even though she professes to prefer English over math. And she wants to study computer science in college.

When Hutchinson stumped on the campaign trail, he said a small fraction of the state's more than 300 high schools offered what he would consider to be a computer science class. Nationwide, the ratio was about 1 of 10 high schools, he said at the time.

Nearly 4,000 students took a computer-science course in Arkansas this school year, Owen said. That's up from about 1,100 last school year. There are about 142,000 high school students in Arkansas.

"What will 4,000 in Arkansas with computer coding skills do for our future? And that number will continue to grow," Hutchinson said Friday. "If you just have one of those create the new technology company of the future, then the return on investment is astronomical."

Much of the increase in those taking the classes is among women and members of minority groups -- a statistic Hutchinson has pointed out.

But Qualls said there's still work to do. In a class of 22 students, Sotelo was one of four girls.

Seeing more boys in the classes can dissuade the girls, Sotelo said.

So why is she there?

"I just wanted to try something new," she said. "I wanted to do something different. And this class was so much fun."

By contrast, in Texas, which imposed a similar requirement in 2014, only about a quarter of its school districts offered a single computer-science class in the state's STEM endorsement, said Jennifer Bergland, director of governmental relations for the Texas Computer Education Association. (STEM stands for science, technology, engineering and math.)

Donna Bahorich, a Houston Republican who is now chairman of the Texas Board of Education, proposed the rule change requiring the classes as the board was dealing with a broad education overhaul mandated by the Legislature.

The lawmakers' bill had not proposed requiring computer science to be taught.

"This was it. She basically made this motion and it wasn't until it was almost all done that I was reading them going, 'What is this?'" Bergland said. "It wasn't a big fight. Sometimes you have to fight hard, sometimes things happen because it's the right thing. This is one of those situations."

But because the change wasn't endorsed by the Texas Legislature -- and had no money behind it -- many Texas districts say they don't know about the provision or cannot find or train the appropriate teachers, a key holdup.

No other state has required high schools to teach the classes -- except Texas -- or budgeted as much money as Arkansas' $5 million, said Amy Hirotaka, director of state government affairs for Code.org, a nonprofit organization dedicated to expanding access to computer science and increasing participation by women and members of minority groups.

"While Texas does have that on the books, it's not functionally happening," Hirotaka said.

Code.org -- which is backed by Facebook chief executive Mark Zuckerberg, Microsoft founder Bill Gates and others -- held an event in the Arkansas Governor's Mansion in December.

The Texas Computer Education Association was turned down when it asked the Legislature for $25 million for professional development and a change in how computer-science classes are classified.

In Texas, which has more than nine times the population of Arkansas, that was a nonstarter, Bergland said.

"My computer-science people are excited about what your governor is doing with computer science," Bergland said. "Texas for years has ... kind of been leading in this by most people's standards, but what I've heard is this is an initiative that [Hutchinson] took on and any time you put some money behind something, it sends the message that this is important."

Money -- and the teacher training that comes with it -- is especially important to making a statewide initiative work, experts said.

"When I speak to my counterparts at other [education departments], I'm adamant," said Owen of the Arkansas Education Department. "The biggest hurdle in the initial phases is building teacher capacity."

Owen said most computer-science teachers don't have a coding background.

Qualls -- Sotelo's instructor -- does have that background. She has a degree in computer information systems and worked professionally as a programmer for the Farm Bureau's insurance division and later Alltel, the telephone company that was bought out by Verizon.

She got married, moved to the Philippines, had children and then decided to become a teacher.

"I didn't want to go corporate -- be on call -- with three kids so I thought about teaching. I can teach it and there's not a lot of teachers who understand it [or] have the skills," she said. "I started teaching and I'm loving it. Kids like Noemy, who want to go into programming after taking my class -- it's really cool. Really cool."

Qualls has taught for nine years. She didn't teach computer science for the first two. It wasn't on schools' radar seven years ago, she said, but she made the case for the class to school administrators.

For programmers who want to take the pay cut to teach, the state offers nontraditional licensing from the Arkansas Professional Pathway to Educator Licensure program for those with bachelor's degrees.

The state will pay the program fee of $1,300 per year for those who go on to teach computer science.

Likewise, existing teachers can take a standardized test to become certified to teach a class. The state will pay the fee -- about $130 -- for those who pass.

The state has set aside $750,000 to train teachers this summer and fall. Arkansas also has bought online training subscriptions to Lynda.com, a training website, for every teacher in the state.

Owen estimates there are roughly 250 teachers who are qualified and certified to teach computer science at 335 high schools in the state. Arkansas will need 1,000 such teachers in the next three to five years, he said.

The state also has given $1.64 million in grants to schools providing classroom instruction. Bryant High School was the recipient of one of the $20,000 grants.

For districts unable to hire or train a programming teacher, the state has provided the funding to pay for students to take classes through Virtual Arkansas, an online instruction program made possible by the Education Department and local education service cooperatives.

Of the nearly 4,000 students who took a computer-science course, about 1,400 took the class online.

It's not ideal, but it reaches into every high school with a decent Internet connection, Owen said. The Department of Information Systems is upgrading every school's broadband connection, he noted.

Arkansas' progress may spur other states to act.

"We do think that Arkansas is a leader in computer-science education and a state that others could certainly model themselves after," Hirotaka said.

And Texas doesn't back down from competition, Bergland said.

"We may be trying to catch up to Arkansas," she said. "Texas kind of thinks we invented everything and we're best at everything, so we're going, OK, wait a minute. We can't let Arkansas, our neighbor, beat us in this."

"I want Arkansas to stay in the lead," he said. "What we've seen thus far is phase one. We want to continue to develop this and push it next year and the year after."

"Wait and see," the governor said.