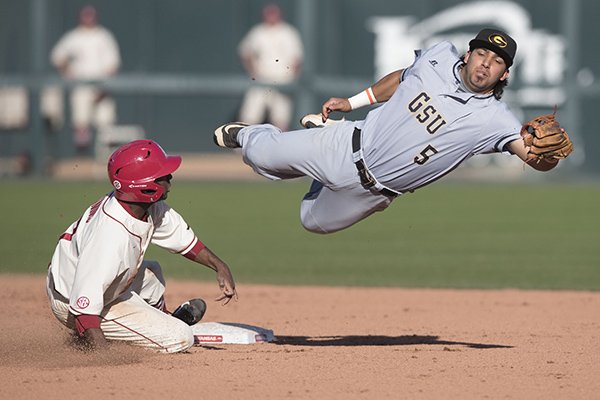 Arkansas' Darien Simms slides into second base as Grambling State's Larry Barraza dives for the baseball during the eighth inning of a game Wednesday, March 16, 2016, at Baum Stadium in Fayetteville.

FAYETTEVILLE -- Thanks to Darien Simms, Arkansas scored the game-winning run against Grambling State on Wednesday without hitting a ball out of the infield.

Simms entered a tie game as a pinch runner in the eighth inning after Cullen Gassaway drew a leadoff walk. Rick Nomura struck out when he couldn't get down a sacrifice bunt, but Simms stole second, went to third on a throwing error by catcher Johan Mojica and scored on Tanner Raiburn's wild pitch to lift the Razorbacks to a 3-2 victory at Baum Stadium before an announced crowd of 2,619.

Doug Willey retired the Tigers in order in the ninth inning as No. 13 Arkansas (15-3) extended its winning streak to five games going into this weekend's SEC opening series at No. 12 South Carolina.

"Darien's such a weapon," Razorbacks Coach Dave Van Horn said. "He's really a pest on the bases. I mean, that's what he is. He likes it, and he's got a good feel for it."

Simms said he got the steal sign after Nomura's strikeout, and his speed forced a poor throw by Mojica that went into center field.

"I was just trying to get a good jump," Simms said. "Once I got it, I saw the ball get past the second baseman, and I knew I had a chance to make it to third. Thankfully, I made it."

Grambling center fielder Angel Peguero got to the ball quickly and made a strong throw to third base.

"When Darien stole that bag, I don't know if you really noticed how fast he got up and was on his way," Van Horn said. "There aren't too many guys that can do that.

"Give credit to their center fielder. He charged the ball hard and made a perfect throw. Darien just beat it. He's full speed after about three or four steps."

Simms, a redshirt freshman outfielder from Spring, Texas, is 3 for 3 on stolen base attempts this season.

"Darien's really fun to watch," Arkansas third baseman Carson Shaddy said. "He's probably one of the fastest players in the SEC, so we're all really excited when he gets on base.

"Their defense just has to be perfect for him not to come around and cross home plate."

Arkansas led 2-0 after three innings. Nomura walked in the second, stole second and scored on Michael Bernal's single. Shaddy doubled in the third, went to third on a groundout by Clark Eagan and scored on Gassaway's sacrifice fly.

Grambling (4-11) tied it 2-2 in the fourth on a two-run home run by Tray Bell -- a junior first baseman from Little Rock Central -- against Arkansas starter Weston Rogers.

"It was a good win," Van Horn said. "We didn't do much offensively, but our bullpen really did a tremendous job for us."

Alberius, a junior right-hander from Little Rock, had four strikeouts in two innings and didn't allow a base runner.

"That team was aggressive," Alberius said. "The only way to get them out is to keep the ball down in the zone and throw strikes, and that's what I did."

Van Horn said he expected a close game after the Razorbacks beat the Tigers 14-4 on Tuesday night.

"It's just the way the game works a lot of times," Van Horn said. "We ended up having to battle.

"I told the players, 'Hey, that's going to happen. You've got to get over it.' The one-run games, you just need to be on the winning side of most of them and they can swing your season."

"I'd like to get him in the lineup a little bit more, but we've still got some issues we've got to work out defensively," Van Horn said. "But I like the way he can bunt, and he swings the bat OK."

Van Horn said he almost didn't redshirt Simms last season, despite his need to add strength and improve offensively and defensively, because of his speed and base-running ability.

"Having that guy off the bench that can score for us from second with two outs and the outfield drawn in or steal a base when you really need it, that's huge," Van Horn said. "It just won a game for us."