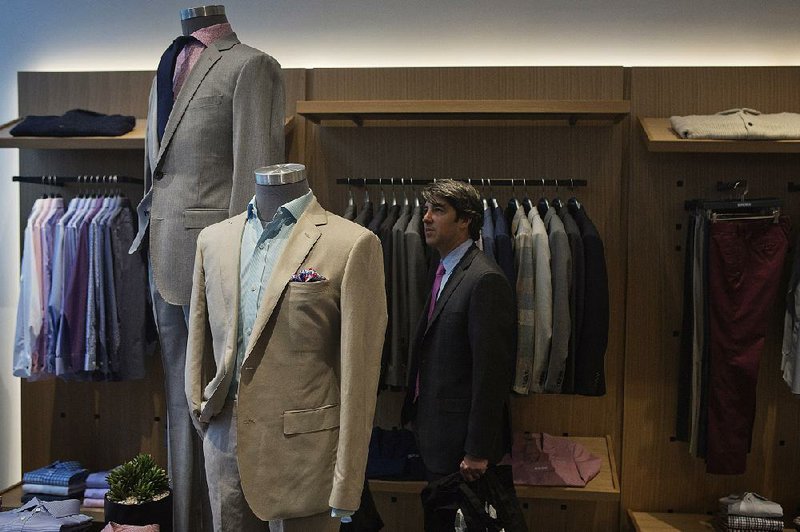 A shopper browses in a Bonobos store in the Brookfield Place shopping area in New York in this file photo. Bonobos is one of several online businesses that have recently opened stores.

PHILADELPHIA -- They're the switch hitters of retail -- players with a growing presence on the other side of the selling field.

Online juggernaut Amazon.com opened its first store in November in Seattle. Around the same time, retail heavyweight Macy's announced it was shutting nearly 40 stores this year to beef up its online presence. Same with Sears, J.C. Penney Co. and the Gap -- all closing stores.

Kohl's said digital sales increased 30 percent in the fourth quarter of 2015, prompting it to re-evaluate its store footprint.

Meanwhile, some companies that began life online -- such as Athleta and Fabletics (which both sell trendy sportswear and accessories for women), Birchbox (a cosmetics company) and Bonobos (a men's online company that rented space from Nordstrom and shipped clothes to homes) -- are now adding stores.

In many cases, they are moving into prime real estate once reserved for top-performing retail stores. Birchbox opened its first store in downtown Manhattan in July 2014.

Warby Parker -- an eyewear company conceived on the Internet by four Wharton business school students -- is taking over premium space for a second downtown Philadelphia store.

"We want to be able to reach as many customers as possible and plan on continuing to expand our retail presence," Wharton graduate Neil Blumenthal, Warby Parker's co-founder and co-CEO, said in late February. "We want as many people as possible to experience our brand in-store, in addition to shopping with us online."

Blumenthal described his firm's expansion to the other side as "organic."

"We tested brick-and-mortar for months through various activations, like the Warby Parker Holiday Spectacle Bazaar [a holiday pop-up store in Manhattan] and the Warby Parker Class Trip, an old, yellow school bus re-imagined as a mobile showroom that traveled to 16 different cities," he said. Those "gave us the confidence to sign our first lease and build out a proper store in New York's SoHo neighborhood.

"Our stores offer customers an additional way to experience our brand," he said.

Eric Rothman, portfolio manager for CenterSquare Investment Management, based in suburban Philadelphia, said this blending of the two worlds is all "part of the evolution of retail."

"Before, it was one versus the other," Rothman said. "That's really no longer the case.

"Catalogs didn't kill brick-and-mortar, and online didn't kill catalogs," he said. "Successful retailers will find ways to advertise and cross all those channels.

"From the landlords' perspective, they always want hot tenants that are selling the most volume that will attract the most customers and other hot retailers to that location," he said. "For those that have not embraced online, they might not be around.

"The strong get stronger, and the weak get weaker, which is exacerbated by the Internet," Rothman said.

Experts say the trend will continue to gain momentum although the impact is likely to differ by retail category -- such as electronics versus clothing.

"The reason for the accelerating shift online is the expanding penetration of online sales across more categories," said Frank Badillo of MacroSavvy, which provides insights about economic, demographic, or other macro-level trends.

Badillo predicted that the more likely build-out for online retailers is to create alternative pickup locations to home delivery.

"There are online retailers who are setting up locker pickups near transportation hubs where shoppers can order online and pick up at the locker location on their way home," he said.

The blurring of the lines is expected only to intensify in the coming years.

"For most products, consumers actually prefer to shop in-store because they want to see and touch what they're buying," said Dave Parro, vice president of the retail technology practice at Walker Sands, a PR marketing firm. "But they also shop online regularly because of the convenience and range of products available."

While living in Iowa, Carmen Machado, 29, for example, ordered Warby Parker glasses online and was mailed five frames at a time to try on.

When she moved to Philadelphia four years ago, she became a regular at the company's showroom.

"With a retail location, you can go down and try more stuff, and have [the glasses] adjusted by sales staff right there -- which is nice," said Machado, an adjunct professor of creative writing. "Online retailers are great, but there's no substitute for trying something on your body -- whether it's clothes or glasses."