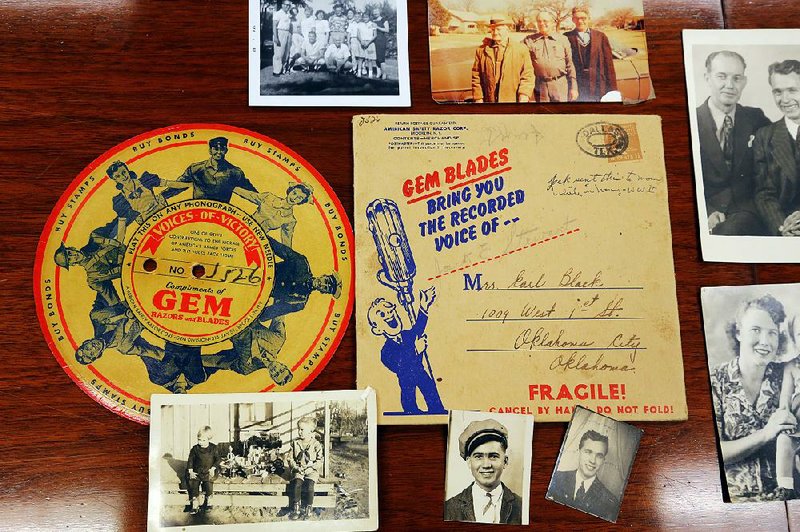 These photos and other memorabilia from World War II are among the items the state auditor’s office has found in abandoned safe deposit boxes. More photos are available at arkansasonline.com/galleries. - Photo by John Sykes Jr. 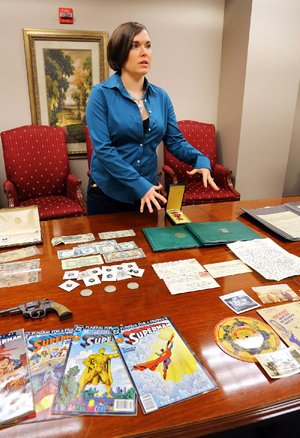 Photo by John Sykes Jr.
Lauren Brewer, a property controller with the state auditor’s office, discusses some of the unclaimed items found in safe deposit boxes. The office is trying to reunite the items with their owners.

It's Lauren Brewer's job to catalog, research and find the owners of each box's contents. After thumbing through thousands of letters, pictures, coins, tax documents, cremated remains and more, the property controller at the state auditor's office says she's gained an appreciation for what people want to protect.

"We're collectors, I think. We like to store what we view as our treasures," Brewer said. "Obviously, you can't store your family in a safety-deposit box, but mom's wallet got put in one, and by the date on her driver's license, you can assume it's her daughter's box. Well, she kept her mom's wallet that had pictures of the kids and the dog and her dad."

Standing in a conference room outside the auditor's vault, she points to the wallet. It's next to comic books, silver bars, marriage licenses, vinyl records and other treasures amassed by the office over the years. The vault is a small, windowless room in the Victory Building on Capitol Avenue near the state Capitol.

Brewer tries to find the story behind each item.

"Yesterday, we got a charm bracelet with hearts on it and each heart had a different name engraved on it. That's one of those where you go, who are these people? Who were these people in her life? Were they kids? Were they friends? Were they relationships? You don't know."

But Brewer likes to imagine.

In one safe-deposit box, she found a 1943 love letter addressed to Emily Climo, sent by Theodore Squires, a Marine, and delivered by airmail, according to the envelope.

But the box owner was an Emily Lancaster.

"We assume it's the same Emily, she just got married, but not to a Squires," Brewer said.

Other times, boxes lack context. There was a box that held only hair and a fingernail clipping.

And some box contents aren't appropriate for a newspaper listing, she said.

Brewer has a degree in social science education. More relevant, she said, is that she is an aerospace propulsion specialist and senior airman in the Air Force Reserve. That means she works on C-130 engines, she explains.

Brewer, who started working for the auditor in January 2015, went through the same training as police to learn how to catalog and store evidence.

The office has a 30 percent success rate for returning the lost property, among the best in the country, said Auditor Andrea Lea.

"The right person is in that job," Lea said.

The office doesn't have the space to store objects forever. Previous auditors have sold valuables and put the proceeds in a trust fund. Paper documents eventually are destroyed. The office makes an exception for military documents.

If property is sold, owners can claim the cash from the auction.

"I haven't had a sale yet, partly because Lauren shows me something of sentimental value, and I'm just like, 'How do we sell that?'" Lea said. "Lauren and I are kindred spirits that way. I'm sure you saw, she really gets attached to people who get attached to these things."

For both Lea and Brewer, the most extraordinary box contained a lost Purple Heart. Brewer was able to track down the soldier's daughter, Memphis resident Angela Allen, who had never seen the medal before.

"We were passing around the box of Kleenex. Lauren was hugging the woman. It was killer," Lea said. "It was quite a moment."

Brewer said paper documents are the items stored most often in deposit boxes, followed by coin collections and jewelry. She has to catalog and price the individual items. That can be tedious, especially for coin collections, she said.

Most of the coins she finds aren't at all valuable.

"It's fun when you open the box and it's something other than that. When you open it up and it's three Beatles records -- you weren't expecting that," she said.

(The box with the records, she noted, also contained the original Star Wars trilogy on VHS, along with James Bond, Indiana Jones and Ghostbusters movie collections.)

But the story behind an object can make it valuable.

"We had one coin collection that was very large," Brewer said. "It had notes -- 'Given to me by grandpa on Christmas 1982,' or whatever it was -- and so going through this box, it was clear they didn't collect it as an investment. They collected it because it was a family thing. I finally was able to get in touch with [the owner] and she started crying on the phone."

The woman, who had been raised by her grandfather, had been looking for the coins but had given up, Brewer said. The collection went back several generations.

"She put it in a safe-deposit box," Brewer said. "So obviously it meant something to her."

Banks are required to send safe-deposit boxes to the auditor after five years of nonpayment. People can search for property at www.claimitar.com or call (501) 682-6000.