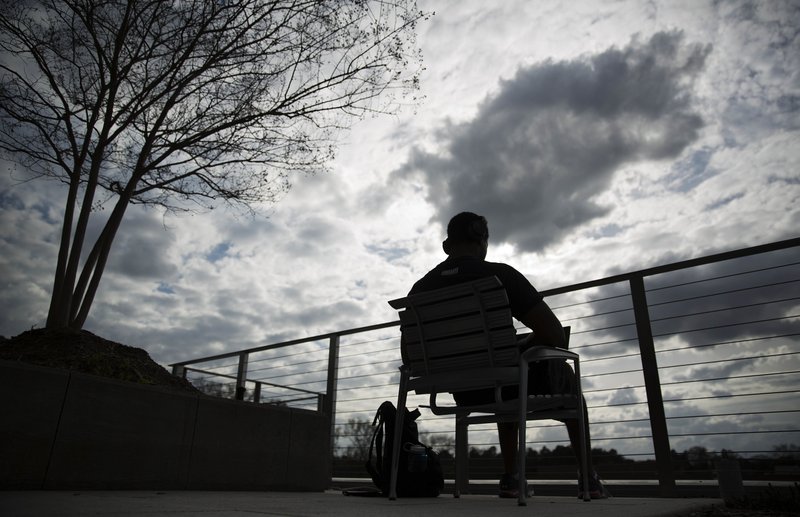 A student works on a laptop computer on a roof deck of the Georgia Tech campus Friday, March 11, 2016, in Atlanta. Licensed gun owners who are 21 and older would be able to carry concealed weapons on public college campuses in Georgia if Gov. Nathan Deal signs a bill headed to his desk.

ATLANTA -- A proposal sent to Georgia's governor would allow licensed gun owners to carry concealed weapons on public college campuses and would create new questions about how higher-education officials will respond and what increased security could cost the state.

That debate already is playing out in other states, including Texas, where a prominent dean at the University of Texas left that state in part because of a new law that goes into effect Aug. 1 allowing concealed handguns in school buildings and in classrooms.

Supporters of the Georgia measure, proposed Friday, argue that people who are properly licensed to carry a weapon would increase campus safety so higher-education officials shouldn't worry about spending more at public college and university campuses around the state.

"This is a red herring that keeps getting tossed about by opponents of the bill," said state Rep. Mandi Ballinger, a Republican co-sponsor of the proposal. "It's simply not true."

But opponents, including the governing board of the 29-school university system, argue that the proposal would make ensuring campus security more difficult for police. Groups opposing the change in Georgia point to other states' experiences with increased security costs. The Association of Florida Colleges estimated increases in campus law enforcement staffing, training, salaries and benefits, insurance and capital expenses would cost $74 million.

"This costs taxpayer money, and this notion that the sponsors say it won't is an absolute misrepresentation of the facts," said Kathryn Grant, director of the Campaign to Keep Guns Off Campus group's Southeast region.

However, Jerry Henry of GeorgiaCarry.Org said in an emailed statement that adding security in response to the bill would be a waste of taxpayer dollars.

"Presently, there is no security being utilized to keep criminals off the campus, why would you think allowing law-abiding citizens to exercise a God given and Constitutionally enumerated right cost anything?" he said.

The bill would allow students age 21 and up to carry concealed firearms on campus if they have the proper permit. Athletic facilities and student housing, including fraternity and sorority houses, would be exempt.

According to the National Conference of State Legislatures, seven other states now allow people to carry concealed weapons on college campuses: Colorado, Idaho, Kansas, Mississippi, Oregon, Utah and Wisconsin. The conference says 23 states leave the decision to ban or allow weapons up to the individual colleges and universities, and 19 states -- including Georgia -- currently ban concealed weapons on campuses.

Georgia's university and technical college systems have not weighed in on expected costs to add security at their campuses, and it's difficult to predict how they would respond if the bill becomes law.

Georgia law now allows people to carry weapons into a government building unless it is screened by security personnel, a change made in 2014 as part of a sweeping law on gun rights. The state Capitol in downtown Atlanta and other nearby state agency buildings, for example, have metal detectors and state troopers or security personnel at each public entrance.

"Our campus police officers will tell you that allowing students to have firearms on campus makes their job extremely challenging, particularly if an extreme emergency were to occur," he said.