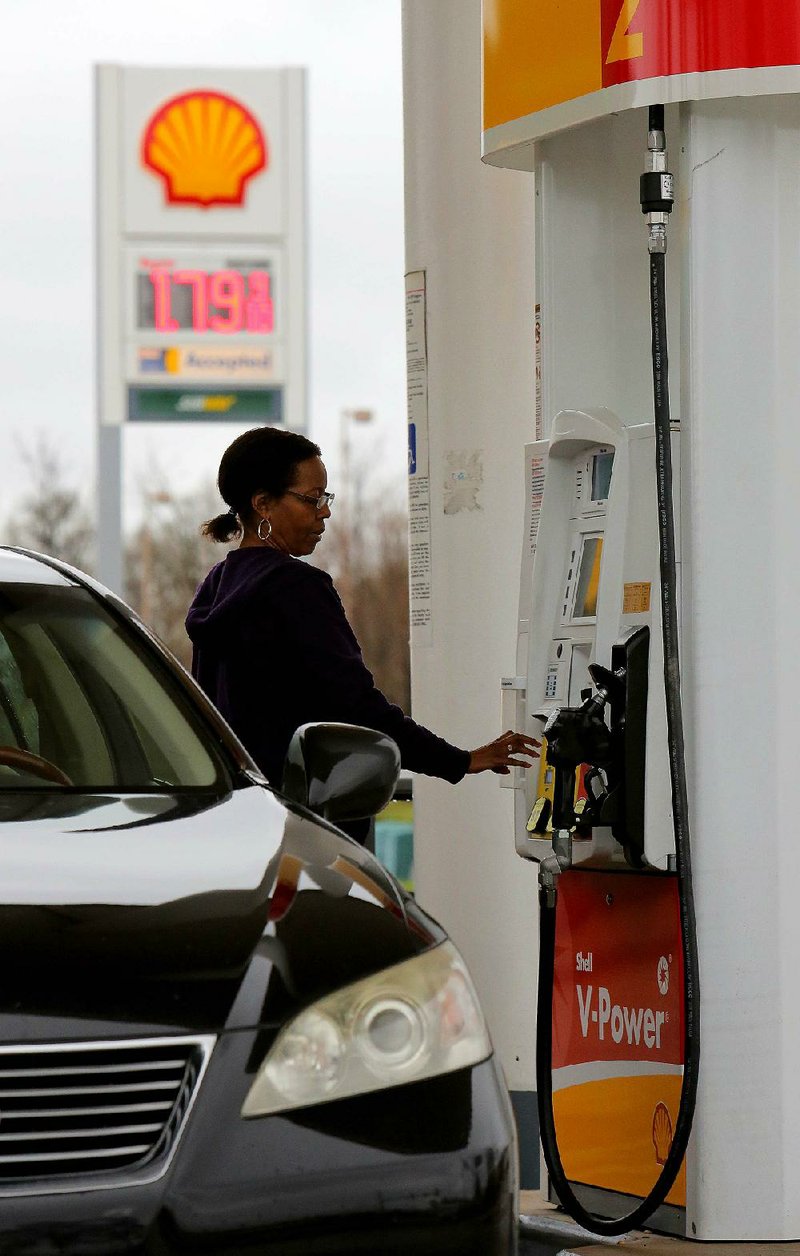 motorist prepares to pump gas for $1.79 a gallon Thursday at a Shell station in North Little Rock. - Photo by Stephen B. Thornton

Retail gasoline prices in Arkansas jumped 16 cents in the past month but are still significantly cheaper than a year ago. 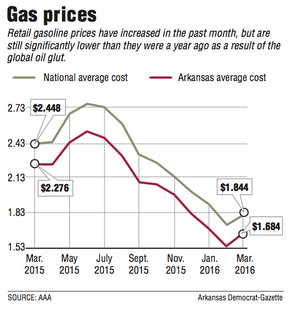 “We are in the rally right now,” Tom Kloza, chief oil analyst for gasbuddy.com, which operates a price-tracking website. “It happens every March, every spring.”

The slump in oil prices has pulled down gasoline prices, but in the spring, gas gets a boost as refineries go down for seasonal maintenance and switch from winter fuel to summer blends, which burn cleaner and are more expensive to refine.

The cheapest gasoline prices found in Arkansas on Thursday ranged from $1.49 in Piggott and $1.53 in North Little Rock and Little Rock.

The most expensive prices in the state ranged from $2.16 in Holiday Island in Carroll County to $1.99 in various cities, including Hot Springs and Fayetteville.

The disparity in prices is, in part, the result of price volatility in the oil market coupled with how and when retailers purchase gasoline, Kloza said.

“You kind of live and die by the way you buy sometimes,” he said.

During maintenance season, refineries do not process as much gasoline. They normally ramp up production again in May when seasonal maintenance ends and to fuel drivers between Memorial Day and Labor Day.

“The bad news for crude: This is why you are going to see crude inventories increase,” Kloza said.

Oil prices experienced a small recovery in recent weeks, but on Thursday prices retrenched from recent highs because the market is still overflowing with oil.

Adding pressure is news that a possible OPEC meeting to consider a production freeze is foundering.

“There’s just way too much crude and not enough places to put it right now,” Kloza said.

He added, “I think the chances of an OPEC meeting are similar to the chances of Bernie Sanders, Hillary Clinton, Donald Trump and Ted Cruz coming up with a coalition platform for a new party.”

Oil prices began to fall from more than $100 a barrel in 2014 when the world became awash with crude and demand weakened.

Record production from the United States in recent years — a result of the shale boom — has played a large role in adding more oil on the market.

Prices, which are down more than 60 percent since 2014, have increased in recent weeks on signs that major global producers, including OPEC, were considering meeting this month to discuss a freeze to their output.

Such a freeze would be an extension of a deal made last month between OPEC members Saudi Arabia, Qatar and Venezuela, along with nonmember Russia, to leave output at January levels in an effort to lift oil prices.

But Thursday, Reuters reported that a meeting between OPEC and non-OPEC countries to discuss a production cap is unlikely because Iran has yet to say it will freeze output.

“Iran has already said that it won’t adhere to it, and I don’t expect Iraq to do so either as their budget is in a very bad state,” Omar Al-Ubaydli, program director for international and geopolitical studies at the Bahrain Center for Strategic, International and Energy Studies, said in an email.

Iran has said it plans to begin exporting more oil as soon as financial sanctions are lifted this year with the goal of getting back to pre-sanction output levels. The country was once the second-largest producer in OPEC.

He added: “Iran’s role is to blatantly expose the instability of the proposed arrangement, in contrast to the Russians, who are likely to cheat covertly and deny it for as long as they can get away with it, before Putin then claims that he cannot control Russian oil companies because it is in the hands of private oil companies that answer to their shareholders.”

Doubts about the meeting partly led to a drop in oil prices Thursday. West Texas Intermediate crude fell 45 cents to $37.84 a barrel on the New York Mercantile Exchange.

Even if the major oil producers were able to reach an agreement to freeze production, it wouldn’t alleviate the glut because the market is still oversupplied by at least 1.25 million barrels to more than 2 million barrels.

“Even if there is an agreement announced, it will not be adhered to,” said Hossein Askari, Iran professor of business and international affairs for the Elliott School of International Affairs at George Washington University.

“If you look at the history of OPEC since its founding, it hasn’t acted as a cartel,” he said. “The only way it has been effective is when Saudi Arabia acted as a swing producer by itself. And that’s not a cartel.”

In the past, OPEC, led by Saudi Arabia, would reduce its production to force prices higher or increase production to lower prices.

So far, OPEC has refused to reduce its production, a decision analysts say has been made to defend market share against the rise of U.S. shale output.

“It’s not really about actually effecting a price increase — it’s about Saudi Arabia showing Saudi Arabian citizens and other analysts that the Saudi government’s assessment is 100 percent correct: other major oil producers, such as Russia, Iran and Iraq, cannot be trusted, and defending market share is absolutely the right choice for Saudi Arabia,” Al-Ubaydli said.

Murphy Oil Corp. of El Dorado said earlier this year that it plans to spend 62 percent less this year. The 2016 capital spending cut follows a 30 percent cut in spending and 20 percent cut in employees in 2015.

The company also has left the door open for further cuts this year.

“U.S. shale producers will continue to suffer heavily; they have been innovating to cut costs, but there are limits to the technological progress that they can achieve on a consistent basis,” Al-Ubaydli said.