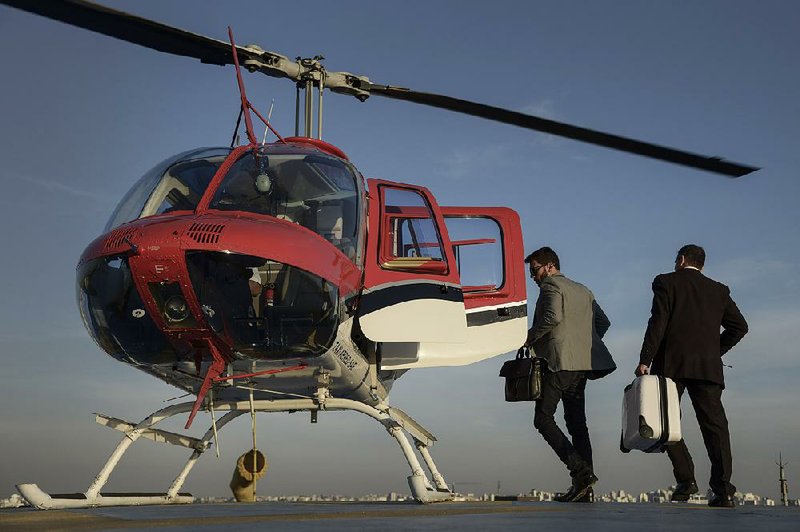 An employee helps a passenger load luggage into an Uber Technologies Inc. UberCOPTER at the Blue Tree Hotel helipad in Sao Paulo in mid-June.

The thunderous chop of helicopter blades echoes from the glassy facades of skyscrapers as top bank executives return from weekend beach jaunts. The ear-splitting migration is heard most Sundays in the financial district of Sao Paulo, South America's biggest metropolis. But if Uber has its way, helicopter commutes will no longer be exclusively for Brazil's most elite financiers. 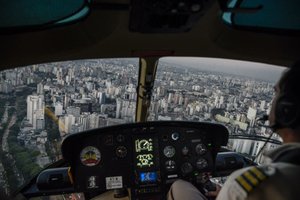 The city is fertile ground for experiments in urban mobility. Gridlock is rampant, traffic jams can stretch for hundreds of miles, and the country is in the midst of an auto boom, thanks to tax incentives from President Dilma Rousseff.

The excessive number of cars gives Uber a large pool from which to draw willing drivers. Despite early scuffles between Uber drivers and taxi unions, Brazil is set to eclipse Mexico as the top market in Latin America for the company. It may get a further boost if the city decides to allow the use of public transport travel cards for Uber rides.

Once airborne, the flight from Campo de Marte Airport in northern Sao Paulo to the Guarulhos International Airport took 10 minutes and cost $63, plus $9 for the car ride from house to helipad, or about twice what the trip would have cost by cab alone. The same trip in a cab, however, could have taken an hour or two in rush-hour traffic.

It turns out that Sao Paulo has a glut of helicopters, not just cars, and an oil bust has meant less work for air taxi companies that cater to the oil industry. The average helicopter is used 400 hours per year but has capacity for 2,000 hours, meaning that Uber has room to quintuple usage without adding a single helicopter to its 400-strong fleet, Telles said.

Early signs indicate demand can fill at least some of those available hours. Telles said the program, which Uber began in partnership with Airbus, has already attracted strong demand.

Uber announced recently that customers could catch rides among four airports and five heliports around the city for promotional prices of $20. Critics have accused the company of offering the service at an unsustainable discount, but Telles said that isn't the case.

"We are always looking for the best price which is sustainable for partners and helicopter owners," Telles said. "The helicopter taxi industry has been around and idle here for ages, and we are just using technology to make better use of it."

Taking a helicopter is seen by most Brazilians as an ostentatious display of wealth. For a few bucks a ride, however, the luxury for the mega-rich may lose some of its standing a status symbol.