Board dissent on expansion not total loss 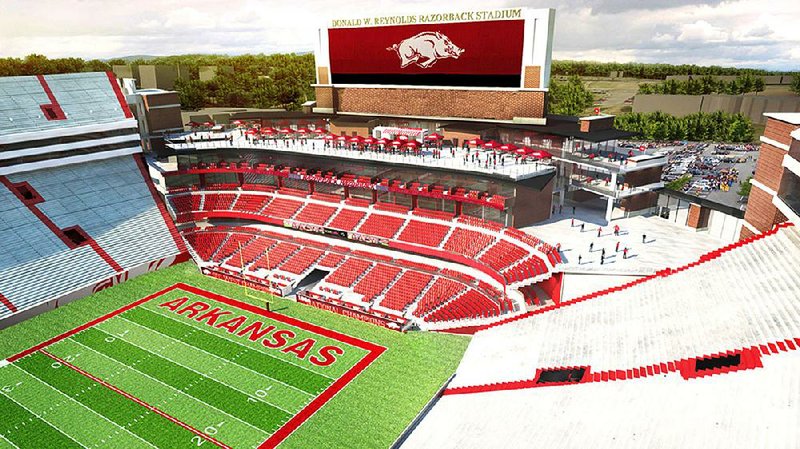 A $160 million construction project for Donald W. Reynolds Razorback Stadium, shown in this artist rendering of the expansion, was approved Thursday by the University of Arkansas System board.

FAYETTEVILLE — Of all the pros and cons debated before the University of Arkansas board of trustees voted 8-2 on Thursday to approve expanding Reynolds Razorback Stadium, one rationale should disturb all above all.

Board member John Goodson’s vote approving the initially estimated $160 million project for the football stadium in Fayetteville seemed most based on Razorbacks Athletic Director Jeff Long initiating it and new Fayetteville campus Chancellor Joe Steinmetz and UA System President Donald Bobbitt supporting it, and Goodson apparently fearing opposing it would offend them.

Casting a no vote is “a vote of no confidence in our chancellor, our president and our athletic director,” Goodson told his fellow trustees which included member David Pryor, the Camden native, UA grad and former Arkansas governor and U.S. senator, leading the dissent.

Certainly input from the athletic director, chancellor and president should be weighed considerably. Nobody should want a micromanaging board of trustees delving into every UA decision.

But if voting a “no” on a specific issue is deemed an all-encompassing vote of no confidence because it’s against the grain of the president, chancellor and athletic director, then why bother having a board of trustees?

If the board’s sole function is lapdog rubber stamping whatever the athletic director and chancellor and president approve in lockstep, then the board seems unnecessary.

Spare our state the hypocrisy of assembling a board of lackeys. Let them call the Hogs on their time and on their own dime.

Pryor’s strong dissent finally lent credence that not all on this board automatically knee-jerks adherence to the Hog calls of an athletic department that while financially self-supporting, allegedly always has been and allegedly still is a part of and subject to the University of Arkansas.

Looking back, a more attentive and less subservient board of trustees might have grilled Long on how former Razorbacks football Coach Bobby Petrino could have been allowed to feel so brazenly above UA rules to violate them so conspicuously that the now-Louisville coach had to be fired upon the revelation that he hired his mistress on football’s payroll.

Instead, at the since former chancellor’s behest, the 2012 board handed Long a $50,000 bonus for fulfilling his job description by firing Petrino like any other UA employee would have been fired for contemptuously transgressing UA policy.

After hiring the incompetent, bankrupt, but at least not malicious, John L. Smith as interim coach for 2012, Long seems to have hired a good man with a good plan in Bret Bielema. Bielema’s standards have vastly improved the Razorbacks academically and registered annual progress on the field.

But in Art Briles, Baylor thought it had a great man executing a spectacular plan.

No situation should ever look too good for a supervising board to shrink from asking what needs asking and debating what should be debated.