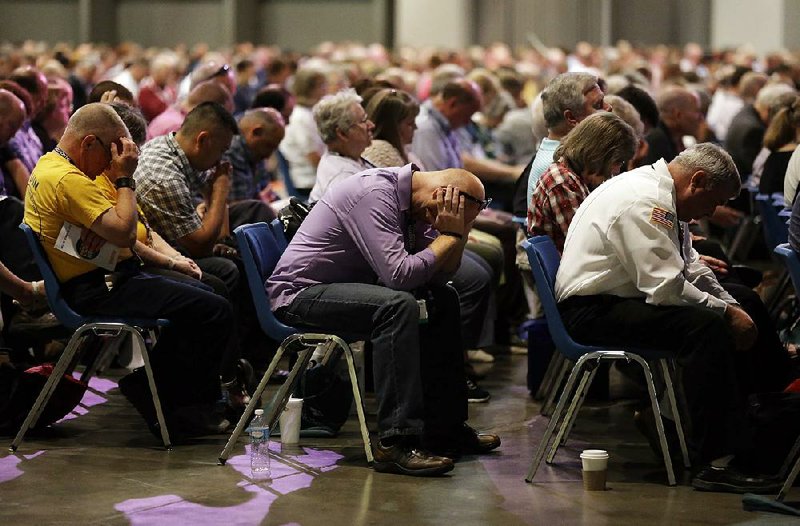 People pray Tuesday during the annual meeting of the Southern Baptist Convention in St. Louis.

Ronnie Floyd gave his final address as president of the Southern Baptist Convention on Tuesday, calling on the denomination to increase its influence in the United States. 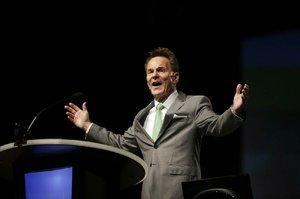 Photo by JEFF ROBERSON / AP
“We are on the precipice of either experiencing an awakening or falling into an abyss,” Ronnie Floyd warned Tuesday in his final address as Southern Baptist Convention president.

"The stakes couldn't be higher," said Floyd, who is senior pastor of Cross Church in Northwest Arkansas.

Floyd repeatedly used the phrase, often punctuating each word with vehement hand gestures to emphasize the urgency in addressing what he called the "declining moral standards" of the nation.

"Unraveling is taking place at our very core," he said.

Floyd pointed to the U.S. Supreme Court's ruling that legalized same-sex marriage last year and the battle over whether to allow transgender people to use the bathrooms of their choice as examples of how the U.S. is walking the "ragged edge of morality."

Southern Baptists define marriage as a union between "one man and one woman in a covenant commitment for a lifetime." And a 2014 study from the Pew Research Center showed that 71 percent of the almost 2,000 Southern Baptists surveyed were strongly opposed to same-sex marriage.

He also said that the conversation around the recent killing of a gorilla in a Cincinnati zoo after a 3-year-old boy fell into its enclosure was a sign of a lack of love for human life, mirrored in the abortions that take place around the country.

"We are on the precipice of either experiencing an awakening or falling into an abyss," Floyd said.

Floyd called for the church to take five actions to increase its influence and become a catalyst for that awakening.

The first two were for more unity and leadership within the convention.

"We need to lead with our influence and this begins with us understanding something -- that the game is out there in a world without Jesus Christ," he said.

He next addressed reaching out to the world by increasing evangelism efforts, which are declining as the nation's largest Protestant denomination decreases its number of international missionaries by 1,000.

"Evangelism is dying in our churches," he said.

He also requested that church members give more money to the convention.

Floyd closed with a plea for Southern Baptists to spend more time praying for the country and called for churches to join together in prayer on the 15th anniversary of the terrorist attacks of Sept. 11, 2001, by dedicating the entire service, or at the least 11 minutes, to prayer.