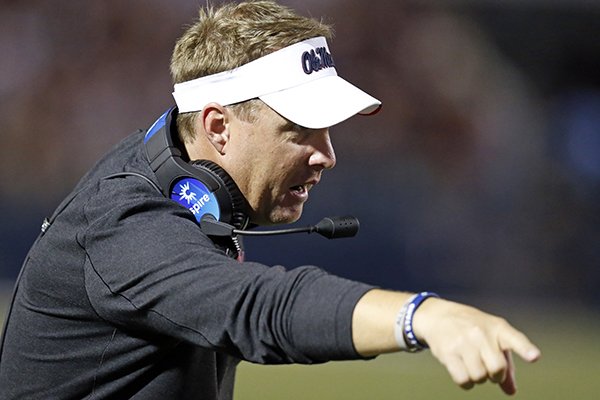 Mississippi head coach Hugh Freeze calls out to the officials during the second half of their NCAA college football game against Texas A&M in Oxford, Miss., Saturday, Oct. 24, 2015. No. 24 Mississippi won 23-3. (AP Photo/Rogelio V. Solis)

FAYETTEVILLE -- Some college coaches pass the buck better than their quarterbacks pass the football.

The buck-passing prowess of three coaches with programs under fire could be tested during SEC football media days Monday through Thursday in Hoover, Ala.

Problems at Tennessee, Mississippi and Mississippi State could have Volunteers Coach Butch Jones, Rebels Coach Hugh Freeze and Bulldogs Coach Dan Mullen scrambling to pass the buck to higher-ups on their campuses over answering media questions on the spot.

Expect them to ask, "Can't we just get back to football?"

While in legalese not admitting guilt, the University of Tennessee this week settled a lawsuit out of court by paying $2.48 million among eight women. UT athletics picked up half the tab.

Each woman was listed as a Jane Doe in their suit, which among other things criticized the university as "maintaining a hostile sexual environment." The suit cited numerous sexual assault allegations concerning several Vols football players and a similar allegation against a former Tennessee basketball player.

Tuesday is not the best timing for Jones to speak at SEC media days, but at least he will have company in Mullen.

Five-star recruit and incoming freshman defensive lineman Jeffery Simmons was admitted to Mississippi State despite video of him in March repeatedly striking a woman who was fighting with Simmons' sister. Simmons was charged with simple assault.

The timing of the slap on the wrist reeked. It was announced on the heels of Baylor University ousting President Ken Starr and Coach Art Briles after a sexual assault scandal in its football program.

From Baylor's nadir, it seemed most everyone in collegiate athletics vowed lessons would be learned not to look the other way at violently intolerable behavior.

Then, from Mississippi State President Mark Keenum on down, that school looked the other way.

Meanwhile at Ole Miss, the school early on dismissed the "narrative" of NCAA allegations against it as mostly tied to the regime of preceding football coach Houston Nutt and other Ole Miss sports.

Turns out nine of the 13 NCAA allegations against Ole Miss football are on Freeze's watch. Further investigation results from Ole Miss tackle Laremy Tunsil's nightmare of a draft night.

On the night he was drafted, Tunsil's social media accounts were hacked to reveal Tunsil may have requested and accepted money from Ole Miss staff members.

For now, it seems Arkansas' Bret Bielema is among the coaches who will just be talking about football in Hoover.

We say "for now" because every college football coach knows he is just one phone call away from learning of players, boosters or staff members running amok.