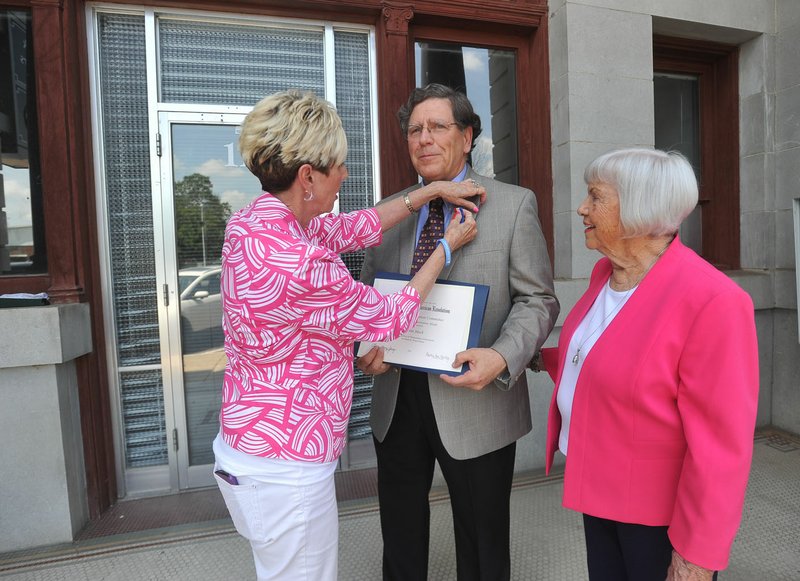 Frances Rankin (left) and Wanda Bautts, (right) both with the James Bright Chapter of the National Society Daughters of the American Revolution, presents John Mack from JKJ Architects the Historic Preservation Medal from the society’s Historic Preservation Committee on Tuesday in front of the old First National Bank building in downtown Rogers. The national award recognized Mack for his effort restoring several historic buildings in the area.

ROGERS -- Performers at the Rogers Opera House in the early 1900s signed their names on the green room walls, architect John Mack said.

Will Rogers performed at the Victory Theatre.

More than a century later, the marble columns, original brick, clay tiles and pressed tin ceilings of these structures have been restored. For that work, the Rogers chapter of the Daughters of the American Revolution honored Mack of JKJ Architects with a historic preservation award Tuesday.

"This is a very prestigious award, both in the state and in the society," said Frances Rankin, regent of the local DAR chapter, after presenting Mack with the medal.

The award is one of 30 made nationally by the organization and was given to Mack in honor of his work restoring buildings in historic downtown Rogers.

"Historic preservation work is about deciding which elements to preserve and which ones to rehabilitate," Mack said. "It's forensic architecture -- to work through issues of materials, which ones to replace, keep, to repair. But mostly to adapt them to contemporary codes for safety standards."

Rankin said her chapter wanted to award Mack for his efforts in revitalizing the downtown area through restoration projects on the Victory Theatre and the Bank of Rogers, as well as ongoing projects such as the old Opera House and the Lane Hotel, which is being considered for an educational option.

Wanda Bautts, chairwoman and honorary regent for Rogers DAR, said the application process took months to complete and included securing three letters of recommendation from notable people in Northwest Arkansas who could attest to the importance of the historic projects.