Firm's new boss shaped by time out of country 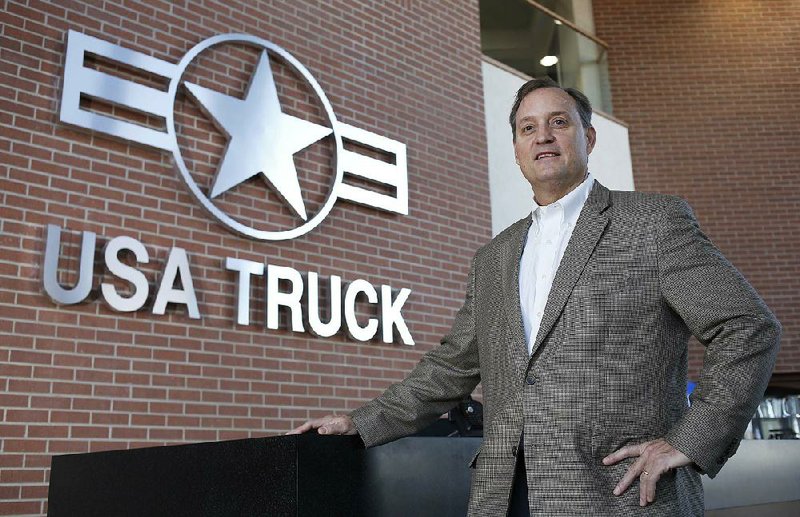 Randy Rogers, the new CEO of USA Truck, has lived all over the world. “I’ve seen it all. I’ve been in difficult situations. But what impressed me about USA Truck was the journey, where we are in the journey,” he said.

Randy Rogers always had a desire to experience different cultures, learn languages and see how the world works. For 17 years, his professional career provided an outlet.

He danced during Carnival and explored the tropical wetlands of Brazil. Two of his three children were born in Mexico City. Rogers and his family got a taste of life under China's heavy smog, southern Europe's culture, and the thrill of being in soccer-obsessed countries when they won World Cup titles.

"Each place I lived was, for me, the right place to live at the time and the stage of our lives," he said.

Rogers, 53, feels the same about his next adventure a little closer to home as chief executive officer of USA Truck in Van Buren. The Maryland native was hired by the company Jan. 13 after an extensive career with DHL Supply Chain, most of which was spent living and working abroad.

He moved back to the United States three years ago and now begins the task of leading a company that has experienced its share of executive turnover. But Rogers plans to provide stability and growth to USA Truck during its evolution in becoming more than just a trucking company.

"It's a privilege and an honor," Rogers said. "It's an exciting time, a chance to create a successful team and be part of that success. It's not going to be just me, but I have a lot of ideas, a lot of energy to work with the team and create a future that's good for our shareholders, good for our employees."

Rogers replaces Tom Glaser, who served three months as interim chief operating officer and an additional three months as chief executive officer, after a search that included about 30 candidates. Rogers brings a background in supply-chain logistics through his work with DHL, lining up with USA Truck's objective to complement its trucking business with a strong freight brokerage division.

USA Truck Chairman Bob Peiser said the company was searching for more of a "broad executive" after its previous two CEOs -- John Simone and Glaser -- had extensive trucking backgrounds. Simone played an important role in turning the trucking division into a profitable unit before stepping down for health reasons last July, while Glaser has worked to reshape its leadership.

Glaser put together what he described as an "A team" in the trucking segment, which now is led by President Martin Tewari. That helped the 66-year-old feel comfortable about stepping away from the CEO role to be replaced by someone whose experiences could make a long-term difference in the Strategic Capacity Solutions -- or brokerage -- division as well.

"We've got a really solid management team in the truckload business and that's my expertise," said Glaser, who has been named vice chairman of the board and is aiding Rogers during the transition period. "The company's focus is to make sure we've got a strong, sustainable truckload business so we can complement it with the SCS business and really grow and expand the SCS business.

"That's not my expertise. So we found a guy we feel can fill that bill. That's Randy."

USA Truck, which will announce its fourth-quarter earnings Tuesday, reported third-quarter revenue of $38.5 million for its brokerage division last fall. It was down from $45.3 million a year ago.

Brad Delco, a transportation analyst for Stephens Inc. in Little Rock, said Rogers' appointment is a sign the board of directors is making a "real concerted effort to turn the company around."

"They are putting in a leader that they believe can provide the long-term leadership that is needed to accomplish that goal," Delco said in an email. "Randy has a strong logistics background which suggests [USA Truck] will continue to focus on strengthening its diversification efforts in becoming a holistic transportation service provider versus just a trucking company."

Rogers helped business grow during his international career, overseeing DHL's expansion in markets such as Brazil. While his background is in supply-chain logistics, Rogers stressed he'll be engaged in every aspect of the trucking segment. His goal is to remove any walls between the divisions, helping them work together for the company's benefit.

There are improvements to make in trucking and brokerage, but Rogers is impressed by the company's optimism and resilience through challenging times. He researched everything: USA Truck's struggle to become profitable, the failed takeover attempt by Knight Transportation, and the instability at the top that started with former CEO Cliff Beckham's departure in 2013.

"It's obvious this company has gone through tough times," Rogers said. "But what I've seen in my two weeks on the job, I don't see any scars. What I see is an organization that is looking to the future."

Rogers was intrigued by what he described as a "powerful platform for growth" and accepted the challenge, adding it to the list of his career adventures. He believes those previous experiences prepared him for an opportunity he couldn't turn down at USA Truck.

"I've learned a lot in the different geographies and I've learned a lot about assessing corporate cultures and motivating teams and building organizations," Rogers said. "I've seen it all. I've been in difficult situations. But what impressed me about USA Truck was the journey, where we are in the journey. I truly believe the best days for this company are ahead of it."