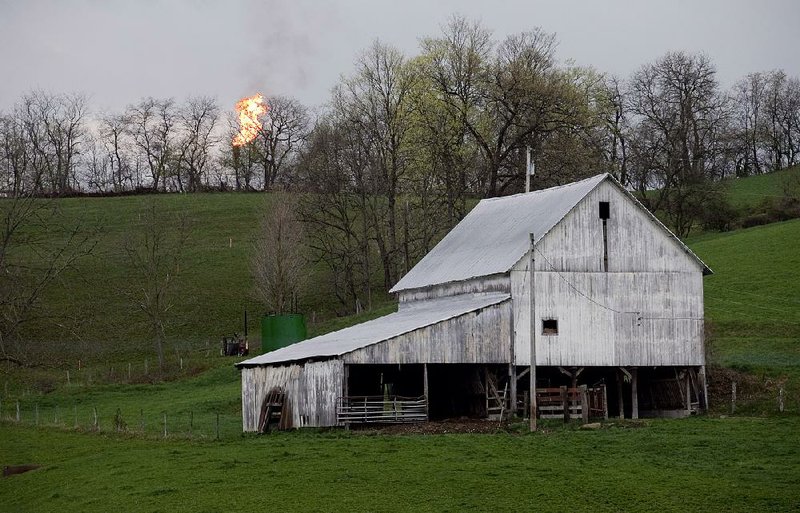 A flame from a flare stack on a natural-gas rig rises behind a barn in Washington County, Pa., in this file photo. Federal rules proposed Friday would clamp down on oil companies that burn off natural gas on public land.

WASHINGTON -- The Obama administration on Friday proposed a new rule to clamp down on oil companies that burn off natural gas on public land, arguing the effort will reduce waste and harmful methane emissions as part of President Barack Obama's bid to curb climate change.

Energy companies frequently "flare" or burn off vast supplies of natural gas at drilling sites because it does not earn as much money as oil. A report by the Government Accountability Office said 40 percent of the methane gas being burned or vented could be captured economically and sold.

Interior Secretary Sally Jewell said in a statement that natural gas should be used to power the economy -- not wasted being burned into the atmosphere.

Jewell said the new rule will modernize decades-old standards to reflect existing technologies, allowing companies to use captured natural gas to generate power for millions of homes and businesses. Between 2009 and 2014, enough natural gas was lost through venting, flaring and leaks to power more than 5 million homes for a year, she said.

The rule also should generate millions of dollars that can be returned to taxpayers, tribes and states while reducing pollution, Jewell said.

The rule, developed by Interior's Bureau of Land Management, would require oil and gas producers to limit the rate of flaring at oil wells on public and tribal lands, periodically inspect their operations for leaks and replace outdated equipment that vents large quantities of gas into the air. The rule will be open for public comment for at least two months, with a final rule expected by the end of the year.

Most of the gas being burned at drilling sites is methane, a powerful greenhouse gas that is 21 times more potent at trapping heat than carbon dioxide, although it does not stay in the air as long. Methane emissions make up about 9 percent of U.S. greenhouse gas emissions, according to government estimates.

The oil industry has argued that new regulations are not needed for methane because the industry already has a financial incentive to capture and sell natural gas. Methane emissions have been reduced by 21 percent since 1990 even as production has boomed, according to the Western Energy Alliance, an industry group.

"Another duplicative rule at a time when methane emissions are falling, and on top of an onslaught of other new [federal] regulations, could drive more energy production off federal lands," said Erik Milito, director of upstream and industry operations for the American Petroleum Institute, a lobbying group for the oil and gas industry.

If that happens, the result would be "less federal revenue, fewer jobs, higher costs for consumers and less energy security," Milito said.

Environmental groups praised the tougher methane curbs, saying regulations are needed to encourage industry changes that otherwise may not occur.

"Today's proposal is a win all around: for our environment, public health, taxpayers and our energy security," said David Willett of the League of Conservation Voters.

In the oil-rich Bakken region of North Dakota, as much as one-third of natural gas is burned off, causing significant light pollution that is visible from space. Officials at Theodore Roosevelt National Park in North Dakota said flaring activities can spoil the park's dark night skies.

The Interior Department rule is part of the Obama administration's plan to cut methane from oil and gas drilling by 40 to 45 percent by 2025, compared to 2012 levels.

The Environmental Protection Agency issued a rule in August that requires energy producers to find and repair leaks at oil and gas wells and capture gas that escapes from wells that use a common drilling technique known as hydraulic fracturing, or fracking.

The methane rules come after a regulation Obama issued last year to cut carbon-dioxide emissions from coal-fired power plants by 32 percent. That plan, the centerpiece of Obama's climate-change strategy, has drawn legal challenges from power companies and Republican-led states.