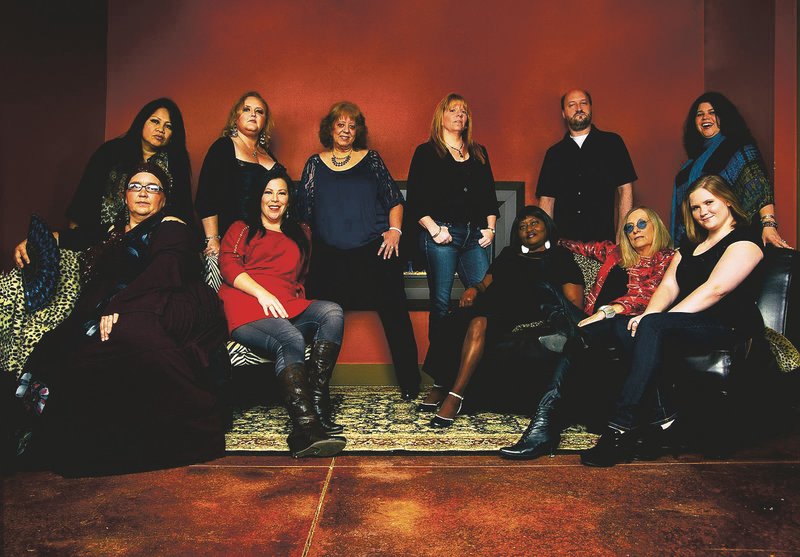 The Divas On Fire will compete at the International Blues Festival in Memphis next week. Members Liz Lottmann, Leah Spears and Rachel “Brick” Fields have been to the competition before, but this will be the IBC debut for the rest of the members.

“People really do come from all over the world for this thing because Memphis is their blues Mecca."

I have watched Leah Spears say this statement with a wide smile, open hands gesticulating next to her face for emphasis, at least a half dozen times in the weeks I have spent getting to know the Divas on Fire, a local "super group" of blues musicians who came together to empower women in the Northwest Arkansas music scene. The Divas will compete in the group category at the 32nd annual International Blues Challenge in Memphis, Tenn., beginning Wednesday.

"It is impossible to deny the vocal talent" in this group, says Jerry Wofford, a music writer for The Tulsa World and judge of the group category at the Ozark Blues Challenge, where the Divas won first place in October. "At first I was a little apprehensive when I saw them because there's so many of them. In my experience, the more things you add [to an act], the more it can get out of control. But when they started to play, it really took me by surprise. You'd be blessed to hear just one of those voices in a band, so to hear one after the other really put them over the top."

The Divas on Fire

At the International Blues Challenge

WHERE — Venues on Beale Street in Memphis, Tenn.

One after the other refers to the six lead vocalists in the group. The Divas on Fire comprises some of the biggest local blues legends the area has seen in the last few decades, one honorary "divo" (Matt Perine) and one member's daughter (Tori Rudolph): Dawn Cate, daughter of Earl Cate and the face of Dawn Cate & the Rhythm Kings; Leah Spears and Jody Andrews of Leah & the Mojo Doctors; Alma Blecher on bass; 'Lectric Liz Lottmann, the front of many blues groups and Arkansas Blues Hall of Fame inductee; Rachel "Brick" Fields of Brick Fields; Diane "The Beast" Rudolph of Eye for a LiE; and "Fayetteville's First Lady of the Blues," Ocie Fisher.

"We're not doing this to be famous, we're doing this to be good -- to be recognized as a pretty powerful unit," says Lottmann, founder of the Divas. "But I thought, 'I've got all these great connections. Why don't I put something really spectacular together and show it to them?' I can do a local band any day of the week. But this is my swan song. I'm soon to be freakin' 67 years old; I don't want to play local clubs anymore. I thought, 'Let's put together a super group and let's go! Let's see what happens, man!' It's revived me -- my level of commitment -- to want to make a band work. I told them, 'You're takin' me to Memphis because I won't get this chance again!'"

The women want the community that has supported them and rallied around them to understand what an accomplishment it is to earn a spot at the IBC. This year, 120 bands from across the U.S. plus entries from Europe, Australia, Colombia, Israel and a handful of other countries will compete in the group category against the Divas. Every group must be sponsored by a Blues Foundation Affiliate, the way the Divas are backed by the Ozark Blues Society, and each has already competed at the local level to earn a spot in Memphis. They were judged in their regions -- and will be again in Memphis -- on blues content, vocals, talent, originality and stage presence. That will determine the top five groups that will perform in the finals at the Orpheum Theatre on Jan. 30.

People with blues societies are there, "out scouting for bands for their festivals. Record producers, agents, publicists, radio programmers, DJs; everybody in the business is there," Lottmann says. "And they are blues lovers, but they're doing some serious shopping. That's what IBC is: it's a huge marketplace for blues -- every aspect, in every way. There's nothing like it, anywhere." IBC "is the vehicle that can make everybody in this band decide if they want to keep pushing or come back and be local. That is a critical career decision you have to make as a musician."

At a Sunday evening rehearsal in the basement practice space of Andrews' home in early December, the six vocalists of the group were seated in a circle so as to better see everyone while working on the backing vocals for their original songs. After trying out a drawn out "whoa" and "You don't know me" to back up Lottmann's verses in her solo song, the women settle on "don't know" for the backups. When the entire band is set up, Rudolph on the drums, her daughter at backup vocals, Spears and Lottmann all stop the song mid-verse several times to make changes to timing, the music or the wording. Making it through one song is a tedious but necessary process.

What began as a side gig for almost everyone involved has become a major commitment in everyone's lives in order to be prepared for IBC.

"Because of the responsibility we feel to each other as professionals to get this band to a level that it is going to be taken seriously in Memphis, all of us at some point or another have had to make personal sacrifices just to come together as a whole," Spears says. "It's no surprise that along with great talent sometimes comes great egos. Fortunately, we're all established enough and self-aware enough -- we're all a little bit older, we've paid our dues -- that we're aware of that. People came in putting themselves in check and really wanting for this to be a drama-free, hard-work, high-productive type environment. We're doing what they told us we couldn't."

Although Lottmann says she's had the idea for years to bring together a project like the Divas, the wheels didn't start turning until mid-2014. By the end of that year, most of the members had committed to joining their fellow musicians and they were rehearsing together by December. The mutual respect among the women and their excitement to create a group unlike anything the region has seen were not enough to gain the immediate respect of the community, though.

"You get nine guys together, nobody's going to poo poo," Lottmann says. "Great male musicians get together, and nobody says, 'Their egos won't handle that; they won't stay together.' You never hear that. But you hear it about 'girl groups.' 'It's a novelty' or 'it won't last.' People have a hard time these days having trust. And because it's local, people feel like they know us, and I think they were conflicted in being delighted by the concept of the group but not being able to have faith that it would work out."

"There's this pretense, this assumption," Spears adds. "And this idea that we are trying to very much restructure is that women can work together in an intimate project like this and not kill each other. It's not a hen house. We're all talented enough that we can be just as good or better than any guy band that would play at George's. I [as a female vocalist] have never had to necessarily defend where I'm coming from or where the Divas are coming from. But Liz has. And the instrumentalists have had to do that as well. Because it's just not generally assumed."

"None of us feels like we have to prove anything to anybody," Lottmann is quick to say. "But I think all we felt was, 'This had better be ****ing good!' And we have worked harder than any band I've seen. When I think about [what we have] I mean, my God! There's nothing like it. The Divas are a culmination of a great career I've had -- and the highlight of it."