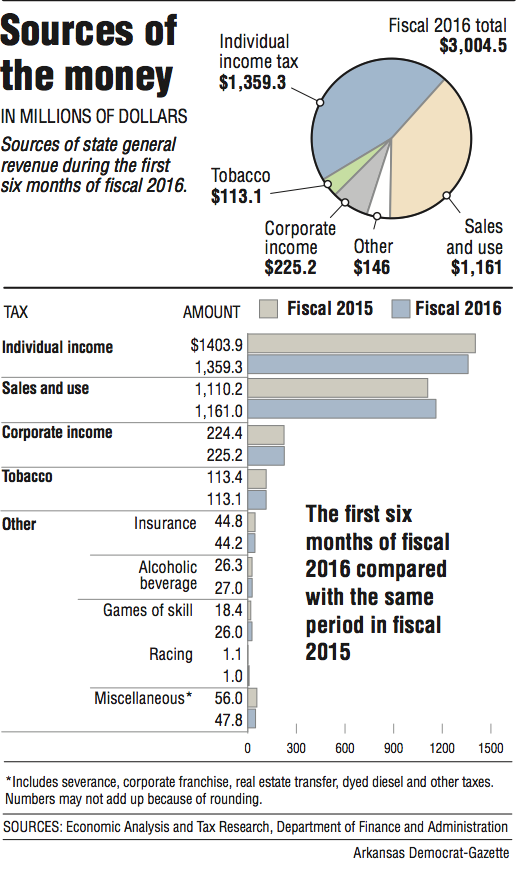 State general revenue last month dipped by $12.8 million from a year ago to $529.3 million, yet still exceeded the state's forecast by $11.3 million.

State government's two largest sources of state general revenue -- individual income taxes and sales and use taxes -- each declined slightly in December 2015 from December 2014, the state Department of Finance and Administration said Tuesday in its monthly revenue report.

Gov. Asa Hutchinson said that overall, state revenue continues to exceed the budget forecast and "this reflects our conservative approach to the budget."

"And even though sales tax collections for December are below expectations, I am confident in the overall financial condition of the state as we enter 2016," the Republican governor said in a written statement.

"In a few months, we'll be able to get a better look at the economy through the revenue numbers," Shelnutt said.

State officials want to see January's sales and use tax collections based on sales in December to get a better handle on retail sales from Christmas shopping, he said. Christmas sales tend to be over a longer period of time than in the past, due to gift cards and other factors, he said.

Halfway through fiscal 2016, state total general revenue increased by $6 million (0.2 percent) over the same period in fiscal 2015 to $3 billion, the finance department reported. That's $85.3 million (2.9 percent) above the state's forecast.

State tax refunds and several other government expenditures come off the top of total general revenue, leaving "net" general revenue that agencies are allowed to spend.

Earlier this year, the Republican-controlled Legislature enacted a $5.18 billion general-revenue budget for fiscal 2016 -- a $127 million increase from 2015 -- as it approved tax cuts projected to reduce state general revenue by $26.5 million in fiscal 2016 and nearly $101 million in 2017.

According to the finance department, December 2015's general revenue included:

• A $2.3 million (1 percent) decline in individual income tax collections from December 2014 to $230.6 million, which exceeded the state's forecast by $11.3 million (5.2 percent). Reduced collections from withholding payments accounted for the decline from year-ago level, the department said. Individual income tax rate cuts enacted by the 2013 Legislature became effective Jan. 1, 2015. They are projected by the finance department to reduce state general revenue by $50 million in fiscal 2016.

• A $2 million (1.1 percent) decrease in sales and use tax collections from a year ago to $186.4 million, which fell $5.8 million (3 percent). The results largely reflect taxable sales activity in November, the department said.

When asked about the December revenue report, Richard Wilson, assistant director of research for the Bureau of Labor Statistics, replied in an email: "No surprises."

Wilson added that he'll make a projection about a state surplus for fiscal 2016 in early February, "after the Christmas money shows up" in January's revenue report.

Tim Leathers, deputy director for the finance department, said it's too early at this point to project whether the state will have a surplus in the fiscal year that ends June 30.