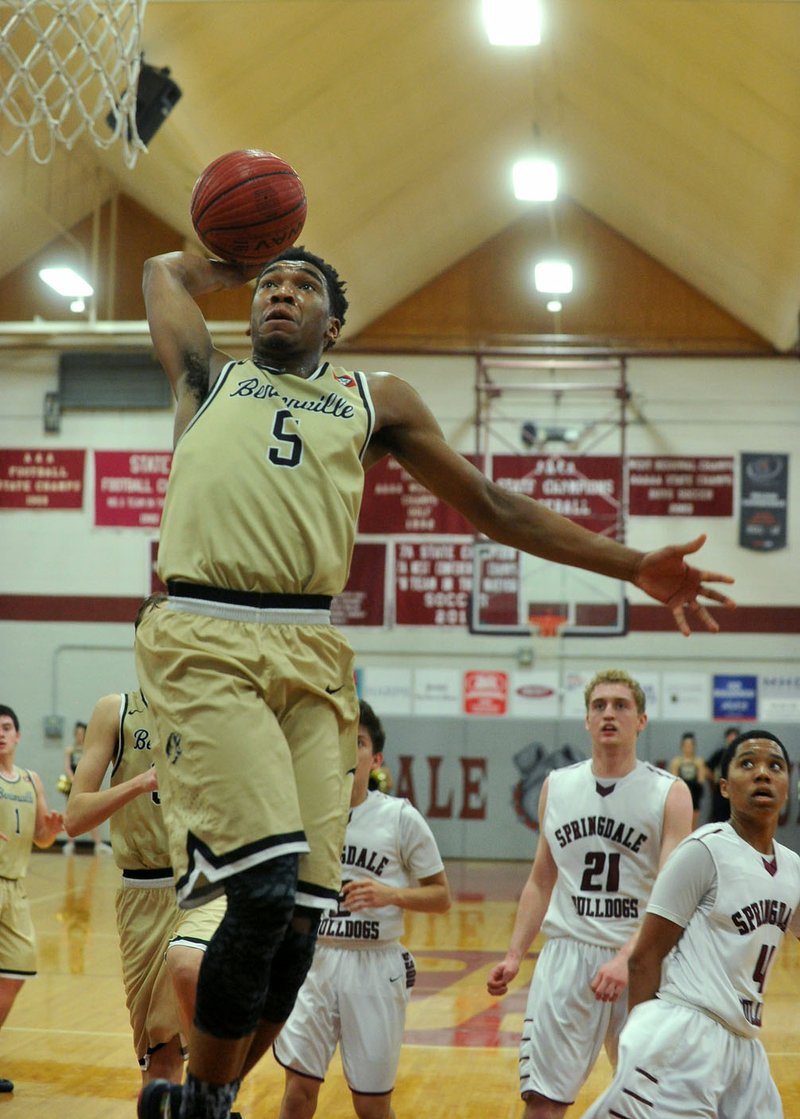 Bentonville’s Malik Monk (5) drives past Springdale defenders as he goes up for the dunk during their game Tuesday at Springdale High School. - Photo by NWA Democrat-Gazette / MICHAEL WOODS • @NWAMICHAELW

SPRINGDALE -- Lauren Hargus drove hard to the basket, generated contact with a Springdale High defender to create separation and made a circus shot.

The scene occurred a handful of times Tuesday night in Bulldog Gym. But the final time proved to be the game-winner when Bentonville's junior point guard answered a Springdale score with an off-balance bucket of her own with the clock winding down.

The shot gave Bentonville a 48-47 lead in a 51-47 marquee road win, a victory in which Hargus scored a career-high 19 to lead the way.

"She's a lot more assertive," Bentonville coach Tom Halbmaier said of Hargus' strong play of late. "She's a lot more elusive. She's so long and lanky with the basketball, I think a lot of people underestimate her speed."

The victory was a breakthrough of sorts for Bentonville (18-5, 7-4), which had come up just short in a handful of games against the conference's top teams. The Tigers lost to conference-leading Fort Smith Northside 43-40 a week ago and took the Lady Bears to overtime in their first meeting.

Springdale outscored Bentonville 12-3 to start the fourth quarter and took the lead on a Maya Hood jumper with less than 2 minutes left. But Hargus answered with the go-ahead shot and later a key steal and two free throws as the Lady Tigers all but locked themselves into a finish in the top half of the conference standings and a potentially favorable state-tournament draw.

"If you would tell me this time last year we were 18-5 and still have three more games to go, I'd be tickled," Halbmaier said. "I'd be on cloud nine. But the reason we're like this is we have captains, and our kids respect them and like them."

Senior Madison Brittain, a Ouachita Baptist signee, added 14 points and hit two big free throws of her own to make it a two-possession game with 7.7 seconds left. Maren Johnston had 10 points and 11 rebounds.

Springdale (15-8, 8-3) likely had its shot at a conference title ended with the loss.

The Lady Bulldogs played without senior guard Anna Gadison, who was in a car accident over the weekend but is expected to return in the near future. Springdale's rotation shortened without one of its top defenders and the Lady Bulldogs couldn't complete the comeback, missing seven game-tying or go-ahead shots in the final minute.

"This stretch last time, we played Northside in that last game and didn't shoot very well," Springdale coach Heather Hunsucker said. "I was wondering if some of that was due to fatigue because of the hardcore stretch with the short rotation. If that's the case, we've got to keep working, because the state tournament we're going to maybe play back-to-back days."

Malik Monk scored 32 points and grabbed 10 rebounds as Bentonville turned a game that was tied after three quarters into a 63-51 road win.

Monk made 9 of 14 shots from the floor and hit all 10 of his free throws for the Tigers (17-7, 9-2). Junior Jordan Hemphill was key, too, scoring 13 and helping break open a tie game in the fourth quarter by igniting a 10-0 run when he was reinserted after sitting for a long stretch with four fouls.

"Once we got him back in, those double-teams on Malik, the ball gets reversed to Jordan," Bentonville coach Jason McMahan said. "He's in the paint and now Tyler (Robinson) gets a dunk, a layup, those clean looks behind all that. And Jordan got there a few times himself and got fouled. Jordan was the key the last 5:38."