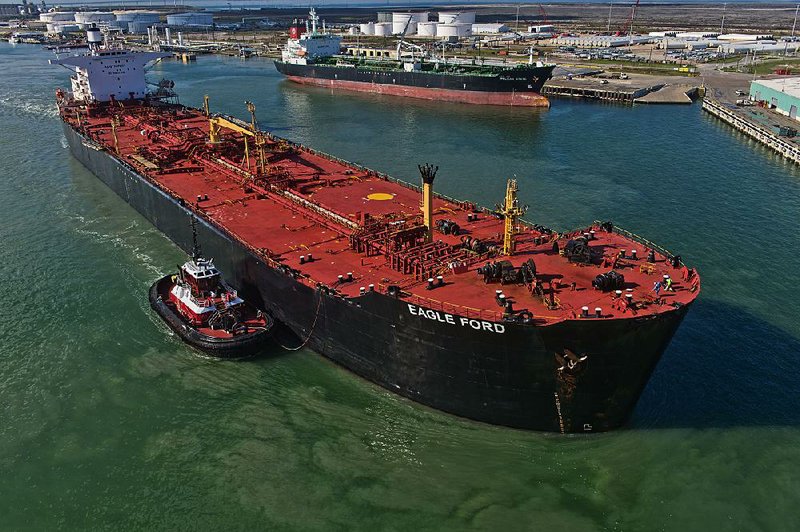 The Eagle Ford oil tanker sails from the NuStar Energy dock at the port of Corpus Christi in Texas in January. - Photo by Bloomberg News / EDDIE SEAL

The world is so awash with crude, the boss of BP Plc said people will be filling their swimming pools with it by the end of the year.

Trading houses, including Vitol Group, Koch Supply & Trading LP and Glencore Plc, plus the in-house trading arms of BP and Royal Dutch Shell Plc, collectively made billions of dollars from 2008 to 2009 stockpiling crude at sea. At the peak of the practice of floating storage, sheltered anchorages in the North Sea, the Persian Gulf, the Singapore Strait and off South Africa each hosted dozens of supertankers.

Chris Bake, a senior executive at Vitol, the world's largest independent oil trader, gave the clearest indication yet this week that traders are considering the same strategy again.

"Primary and secondary storage is pretty much full," Bake said Wednesday in London. "It's probably a good time to be a vessel owner."

Floating storage is profitable when the market reaches a condition traders call a "super-contango." In a contango market, prices of oil for delivery today are lower than those in future months. Buyers with access to storage can fill up their tanks with cheap crude and sell higher-priced futures contracts to lock in a profit.

This has been happening throughout the oil slump using onshore tanks, which are now starting to fill up. Oil stocks at Cushing, the Oklahoma town that calls itself the "pipeline crossroads of the world," serving as the delivery point of the West Texas Intermediate futures contract, have surged to a record of 64.7 million barrels, or more than 88 percent of working capacity, according to data from the U.S. Department of Energy.

Oil stocks are piling up in Cushing as U.S. shale production resists low prices better than expected while refiners cut the amount of crude they process because of declining margins. Last week, U.S. refineries operated at 86.1 percent of their capacity, the lowest since October, the data show.

"In the second half, every tank and swimming pool in the world is going to fill," BP's Dudley said Wednesday at International Petroleum Week in London, which every year brings together hundreds of people from the oil industry, from producers and refiners to traders and bankers.

As onshore storage rises toward full capacity, the market is slowly moving into super-contango territory -- when one-year forward prices trade at a premium of $10 a barrel or more. The price difference between West Texas Intermediate futures for March delivery in New York and one year later was $11.14 at 9:33 a.m. Thursday. The gap was as wide as $24 in 2009.

This opens the door for more costly floating storage, according to traders and analysts interviewed by Bloomberg.

Glencore is storing oil on ships off the coast of Singapore and Malaysia in at least four supertankers, people with knowledge of the matter said last month, asking not to be identified because the information is confidential.

In the Gulf of Mexico, short-term floating storage has become almost possible because of the recent widening in the West Texas Intermediate contango, said Stefanos Kazantzis, senior shipping and finance adviser at ship brokers McQuilling Partners Inc. in New York. The three-month West Texas Intermediate contango was $5.68 a barrel Thursday, compared with the $3.15 a barrel Kazantzis said it would cost to store crude in a supertanker over the same period.

Oil traders' options may be limited in other parts of the world because the contango for Brent, used as the benchmark for many varieties of crude outside the Americas, is currently too shallow to make floating storage profitable.

There has yet to be a meaningful increase in demand to keep barrels at sea, said Halvor Ellefsen, a ship broker at Galbraith's Ltd. in London, and Ody Valatsas, the chartering manager at Dynacom Tankers Management Ltd., a ship owner in Athens.

Still, the widening contango in West Texas Intermediate and the falling cost of hiring supertankers are conspiring "to make the floating cash-and-carry option economically attractive," according to JBC Energy GmbH, a Vienna-based consultant.

The gap between the first- and second-month West Texas Intermediate contracts has expanded by almost 40 percent in the past two days to as much as $2.48 a barrel as of 7:39 a.m. London time Thursday, the widest since 2011. The cost of hiring a so-called Very Large Crude Carrier, capable of shipping 2 million barrels, has fallen by half this year to $49,322 a day, Baltic Exchange data show.

The volume of oil in storage is "only going to get bigger," said Vitol's Bake. "Since 2014 we've accumulated 450 million barrels of stocks. That number we think will go up in the next six months by another 360 million barrels."