Bulldogs manned up to beat Hogs 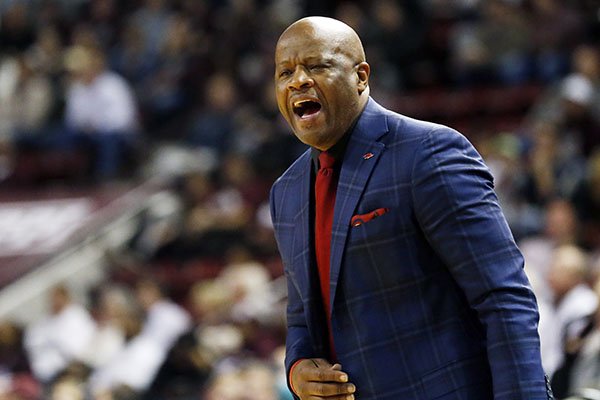 The change didn't work out well for Arkansas.

Arkansas’ 78-46 loss at Mississippi State on Tuesday night matched the Razorbacks’ most-lopsided loss in SEC play. Here is a look at the 10 SEC games Arkansas has lost by the largest margins:

*at SEC Tournament at New Orleans

WHERE The Pavilion at Ole Miss, Oxford, Miss.

The difference in the two games was most evident from beyond the three-point line. The Razorbacks hit 16 of 24 three-pointers against Mississippi State's zone in the first game but were 1 of 10 against the Bulldogs' man-to-man defense Tuesday night.

"It makes me look pretty dumb," Howland said. "I was really a stupid coach to ever go to zone, because that's not what I believe in or teach."

Howland said he switched from man-to-man defense to zone early in the season after the Bulldogs started 4-6 -- including losses to Southern University and Missouri-Kansas City -- and struggled with foul problems.

An 0-4 start to SEC play convinced Howland -- who has 411 victories in 20 years as a college coach and three Final Four appearances with UCLA -- it was time to give man-to-man defense another try.

"Man-to-man is what I've always done," he said. "It's really disappointing to think I ever went to zone as our No. 1 defense."

Arkansas, which came into Tuesday night's game averaging an SEC-best 81.8 points, was held to its lowest score in Mike Anderson's five seasons as coach. The Razorbacks' previous scoring low under Anderson came in a 67-49 loss at Vanderbilt on Feb. 9, 2013 -- exactly three years prior to Tuesday night's game.

Anderson's only lower-scoring game in 14 seasons as a head coach was at Alabama-Birmingham in 2006 when the Blazers lost at Texas-El Paso 65-37.

"Mississippi State did a good job of really chasing the guys that shoot the basketball," Anderson said. "Then the opportunities that we did have, we didn't knock them down."

Anderson said there were some open lanes to the basket, but the Razorbacks didn't capitalize on nearly enough of those scoring chances. They missed 30 shots in the lane, including 11 layups.

"We didn't finish shots off," Anderson said. "We missed a lot of chippies.

"But let's give credit to their defense, and maybe we were just out of sync a little bit."

Anderson said the Razorbacks' shooting struggles affected their defense -- both in their inability to set up pressure and their intensity level.

"On defense, it seemed like we were a half-step slow," he said. "We weren't tenacious."

Senior guard Anthlon Bell hit Arkansas' only three-point basket Tuesday night with 17:37 left to pull the Razorbacks within 46-24. It extended Arkansas' streak of hitting at least one three-pointer to 898 games.

Bell and junior guard Dusty Hannahs combined to hit 13 of 20 three-pointers in the first Arkansas-Mississippi State game. They were 1 of 6 Tuesday night.

Hannahs, Bell and junior center Moses Kingsley combined for 64 points on 21-of-41 shooting at home against the Bulldogs but contributed 18 points on 6-of-32 shooting on the road.

"I was really impressed with our effort defensively and our ability to switch and communicate and stay with the shooters," Howland said. "We really focused on their personnel and took away their strengths."

The Bulldogs shot 52.9 percent (27 of 51), but senior forward Gavin Ware said the game wasn't about his team's offense.

"Our defense was really there," said Ware, who led Mississippi State with 21 points and 10 rebounds. "We had everybody on the same page clicking."

"We had a lot more energy this game," Ready said. "Playing zone, you can get kind of stagnant. In the man, you get after your guy more, and you're held more responsible for your man scoring.

"I think we got a good grip on that and really kept them from having many open looks the whole game. That's really what set everything up for us."

Ready smiled when asked whether the Bulldogs are now a man-to-man defensive team.

"It was really a great feeling to play like that against a good team," Howland said of Tuesday night's game. "Arkansas is a good team."

So what happened to the Razorbacks on Tuesday night?

"We were real flat, let's be honest," Anderson said. "You can't do that on the road in the SEC. I don't care who you play, wherever you go it's going to be a challenge."

Howland said he could understand how a team might have trouble getting excited about playing the Bulldogs (10-13, 3-8) at Humphrey Coliseum, where Arkansas had won on its previous two trips.

The announced crowd for Tuesday night was 6,272, but there appeared to be fewer people than that in an arena with a capacity of 10,575.

"They're looking at our record," Howland said of the Razorbacks. "It's a tough one to keep your guys up for that. It wasn't a huge crowd, maybe half full.

"They're thinking, 'OK, we're going to kick their butt like we did the last time.' That's human nature."

Instead, it was the Bulldogs who did the butt-kicking the second time around.

"We've had some adversity throughout the year, so we'll figure it out," Anderson said. "We've got a couple days to get prepared."

"It's going to be a challenge, but it's going to be a great opportunity for us to have a bounce-back game," Anderson said. "I know that locker room right now, our guys are really, really disappointed.

"Let's credit Mississippi State. They had a little bit to do with that, but I think more so we had a lot to do with it."