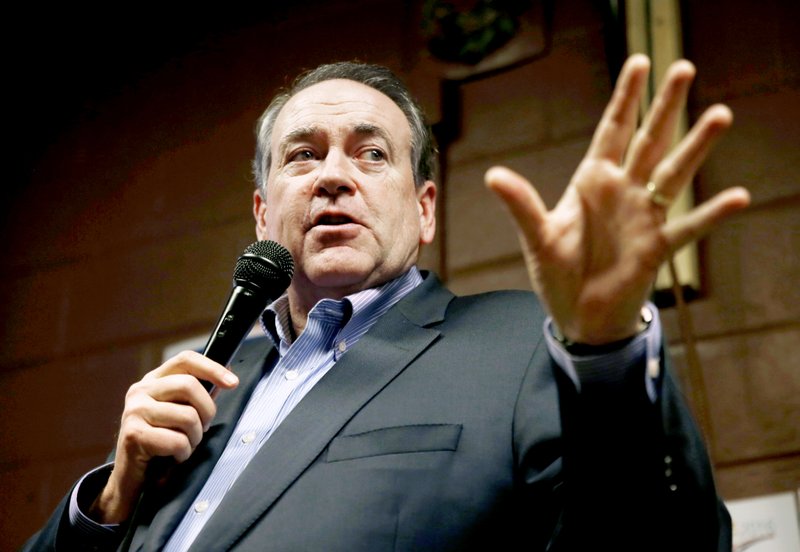 Eight years after sweeping to victory in the state, Huckabee's 2016 campaign was derailed by Iowans who opted for newer, better-funded candidates.

He planned to fly to Little Rock late Monday and then head on to his Florida home today, campaign officials said.

"Folks, let me tell you, it didn't turn out like we wanted it tonight," he told about 100 supporters who gathered in West Des Moines. But he said he is "absolutely grateful" for the support he received.

After expressing his thanks, he informed the crowd that he was dropping out of the race.

"As we come here tonight, it's time to officially suspend the campaign, but not because of the votes. It's because of illness," he said with a smile. "Obviously the voters are sick of me, and I need to withdraw."

People in the crowd drowned out his final words, telling him he was wrong.

"Look, I'd rather win than lose, but I'm telling you I had rather lose an election with the kind of wonderful people that have stood with us through this entire process than to win and not have the kind of prayerful, loving and gracious support that we have enjoyed through this process."

Despite visiting all 99 of Iowa's counties and campaigning vigorously for months, the Arkansas native couldn't gain traction. U.S. Sen. Ted Cruz of Texas upstaged him, capturing the votes of Christian conservatives who were key to Huckabee's victory in 2008. And Donald Trump, the New York billionaire, captivated television news stations and the people who watch them, dominating the airwaves.

As poll after poll showed him toward the back of the pack, Huckabee had predicted he would perform better than expected. He had urged voters to prove the "East Coast" pollsters wrong.

But reality ended up mirroring what the pollsters had predicted.

On Monday evening, Huckabee surrogates who spoke on his behalf quickly realized he was in trouble. His daughter and campaign manager, Sarah Huckabee Sanders, spoke on his behalf at a Des Moines middle school and was warmly received; the caucusgoers greeted her with applause, listened attentively to her speech and laughed at her jokes.

But when the ballots were counted and the results were announced, Huckabee had captured just four of 160 votes at that location.

Huckabee's concession speech lasted about four minutes; he stayed afterward for more than a half-hour to greet the people who had stood with him during the 2016 campaign.

He told the crowd he'd called the top three vote-getters -- Cruz, Trump and U.S. Sen. Marco Rubio of Florida -- after the votes began rolling in.

"I congratulated all of them and I did so sincerely because they have worked really hard. They have captivated the attention and the support of the voters, and I sincerely wish them well as they go forward," he said.

Despite Monday's loss, Huckabee said, the issues he championed would not be forsaken. "I may be suspending our campaign but not our commitment to try to continually work toward those things that got me into it in the first place: making this country better, standing up for life, for biblical principles of marriage and standing up for our country to be a country that really can say that it is one nation under God."

Jonathan Barnett, a Republican national committeeman from Arkansas, said Huckabee had struggled to compete against candidates with superior resources and fresher faces.

"Tonight, the people who have the most money are doing the best," he said. "I think the people of Iowa are just wanting somebody that's new and different."

None of the four members of the Arkansas congressional delegation who had endorsed Huckabee were on hand for the loss.

Former U.S. Rep. Duncan L. Hunter, on the other hand, was present during the campaign's final hours.

Hunter and Huckabee both ran for president in 2008, and the rivals became friends.

"Mike Huckabee is one of the great statesmen, from my perspective, in this country," Hunter said. "I came out from California to help him. I still think he's a great, great candidate for president of the United States."

State Sen. Jason Rapert, who traveled from Arkansas to Iowa to campaign for the former governor, said he respected Huckabee's decision to leave the race.

"I still think he's a great man and I still think he would make the best president we could have at this particular time," the Bigelow Republican said.

Rapert said that with Huckabee out, Cruz is probably now the front-runner in Arkansas' March 1 presidential primary.

"There's a lot of good people running. ... At the end of the day, we're going to come together and we're going to have a nominee who'll work hard to make sure that the Obama and Clinton machine does not continue in this country," Rapert said.