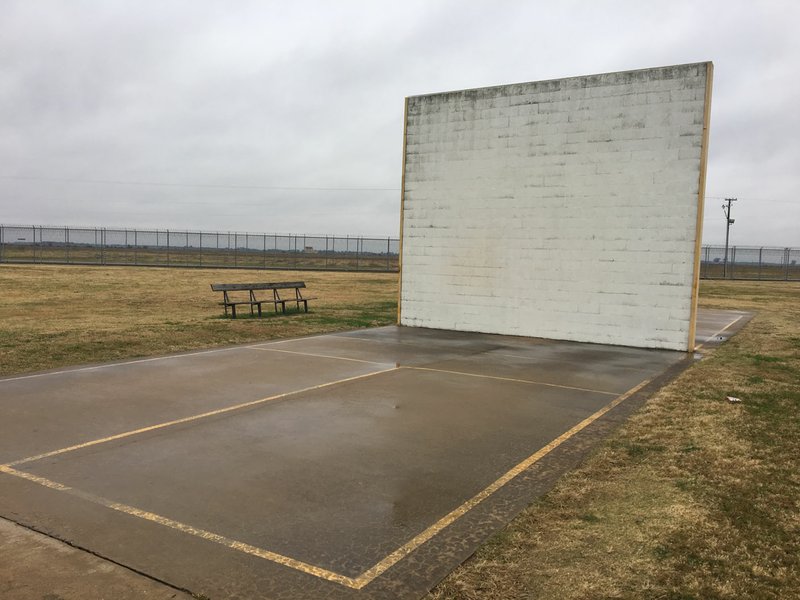 Donors contributed to build an 18-foot wall in the recreation yard at the Cummins Unit in 1993, creating the first handball court at the Department of Correction.

It took a fast-paced and intensely competitive sport to captivate Keith Parke, a self-described "sports fanatic," during the 25 years he spent intermittently locked up in Arkansas' prison system.

For Parke -- who's 49, living in Conway and says he's now cleaned up his life --the game he found most most appealing, American handball, was seldom seen played outside the fences, even as it drew stiff competition among his fellow inmates.

"The more you play, the more energy you find to go after the next ball," Parke said.

Parke's account of the game echoed the sentiments of Arkansas Department of Correction officials, who said handball has become one of the most in-demand sports for prisoners over the past two decades.

The version of handball played in Arkansas' prisons is not akin to the international team sport of the same name appearing on TV every four years during the Summer Olympics.

The American version is similar to racquetball, but players only use their hands. The absence of a racket makes the sport available to prisons and jails, where such equipment would be a security no-go.

Teams consist of one or two players who take turns slinging the ball against a wall. Like in racquetball, the ball must make it past a serving line before it can be returned.

The sport came to the prison system in 1993, when the Jaycees donated an 18-foot-high concrete-block wall and playing court built at the edge of the Cummins Unit recreational yard. Since then, the department has added two more courts at Cummins and at seven units across the state.

The department also has plans to erect courts at Pulaski County's Wrightsville Unit and the Tucker Unit in Jefferson County, according to prison spokesman Solomon Graves.

Handball's roots in America come from New York City, where it was popular among Irish immigrants, according to a history on the website of the U.S. Handball Association. However, similar games played against one or more walls date back much further and to many civilizations, including those in ancient Central America.

Randy Patoka, the head of recreational programs at Cummins, the state's largest prison, said he's seen the rise in popularity of prison handball and helped usher in other sports within the fences, such as soccer and disc golf. Staff members at the unit call him "coach."

On a blustery December morning, with low gray clouds hugging the harvested fields of the Delta and winds blowing west through the yard's chain-link fence, Patoka shivered as he explained the game.

Played with racquetballs -- which are larger, softer and cheaper than U.S. Handball Association-sanctioned balls -- the game can be picked up with as few as two players, which is good for the cold -- or brutally hot -- days when fewer inmates venture into the yard.

During good weather, however, between 40 and 50 people play regularly during the week, said Cummins Warden William Straughn.

"Most of the time, if there's a yard call going on, someone is out here playing," Straughn said.

Around the holidays, the Cummins Unit hosts tournaments to decide the best teams among the variety of sports offered. The winners usually get a slice of the prison's $800 annual prize budget, which is transferred into their commissary accounts.

Handball draws some of the steepest competition during the annual tournament, according to Patoka, with as many as 80 participants -- usually more than softball. Still, neither comes close to the reigning king of prison yard sport -- basketball.

Basketball competitions at Cummins regularly have around 120 participants, who compete on teams with a full-court roster and bench, Patoka said.

"Something that's more popular out there, it will eventually bleed into here," Patoka said.

Traditionally, a game of handball is played until one side scores 21 points, though rising popularity and the demand for limited court space has led to shorter 15-point matches, according to Patoka.

The winning team keeps control of the court.

Out of of prison for four months, Parke said the popularity of handball and other prison sports "is a double-edged sword" for inmates who are expected to reassimilate into society.

As players get better and wrapped up in the competition, the sport can build camaraderie as well as friendly rivalries, Parke said, but it can also become a daily habit taking priority over rehabilitation.

"You can drown out what you've done and forget about the crimes you've committed," Parke said.

Ultimately, Parke said it took the faith-based Pathway to Freedom program, and less time in the yard, to get himself on the right track.

Since his release, Parke said he's been sidelined by a broken arm from returning to playing, but looks forward to playing racquetball or even handball -- if he can find competition.

Handball remains a game largely relegated to the coasts, according to Vern Roberts, the director of the U.S. Handball Association. Between the two varieties -- New York is the epicenter for one-wall courts, while three walls is the game of choice from the Midwest to West Coast -- the game draws hundreds of thousands players nationally, Roberts said.

But the South has been slower to catch on and the U.S. association had no contacts for groups in Arkansas. Still Roberts said he wasn't surprised the sport has flourished behind bars.

"All you need is a ball and a wall, and you've got plenty of walls in prison," Roberts said.