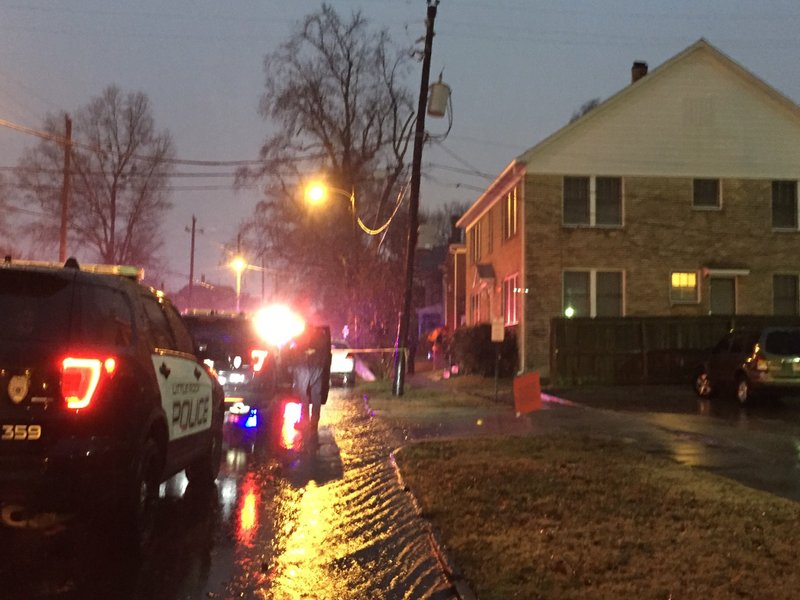 Little Rock police investigate a report of a shooting on Sherman Street on Dec. 24, 2016.

If the baseball team was a band, pitcher John Barfield was the lead singer.

It's how high school teammate Kirk Bock remembers Barfield, the left-handed pitcher who helped lead the Pine Bluff Zebras to a 1983 state championship. Barfield went on to pitch for the Texas Rangers and spend more than a decade in professional baseball.

"A lot of guys kind of forget their roots when they make it, but John never did," Bock said.

Barfield was the life of the party, Bock said, and had a fastball that could just reach above 90 mph.

Barfield, 52, died on Christmas Eve after he was shot in the 500 block of Sherman Street in downtown Little Rock earlier Saturday, police said. His death is the 41st homicide of the year for Little Rock.

Police arrested William Goodman, 59, of Pine Bluff in the death. Goodman has been charged with first-degree murder. He was being held without bail in the Pulaski County jail Sunday evening.

According to an arrest report, Goodman, an acquaintance of Barfield, went to Barfield's residence on Sherman Street on Christmas Eve.

The two men got into a fight, and Goodman fired a handgun at Barfield, according to the report.

She said her brother was never an aggressor and had a loving personality.

"He had the kindest heart of any human I had ever known," Hudson said.

At the UAMS Medical Center on Saturday evening, Hudson said they awaited for news that he would come out of surgery in stable condition.

"And we got an entirely different picture," she said.

Professional baseball had taken Barfield around the world, Hudson said. By the end of his professional career, he had played with teams in Mexico, Taiwan and Japan, she said.

But as the left-handed pitcher for the Pine Bluff Zebras, he helped lead the team to a state championship in 1983 during his senior year. The program would follow up with three more titles in 1984, 1985 and 1986.

"John David was our ace pitcher on the team," said Jeff Gross, a friend and former teammate who played with Barfield on the 1983 run.

Gross said that whenever Barfield took the mound, the Zebras knew they only had to score one or two runs to win the game.

"[Opponents] weren't going to score any runs off of him," he said.

Bock caught for Barfield in high school and said he was already throwing 80 to 90 mph. The left-hander's best pitch was his fastball, Bock said, adding that Barfield might disagree and say it was his curveball.

"He made everything happen for us," Bock said.

"John was just a fun guy to be around," Gross said.

As a kid growing up in Pine Bluff, Barfield always had plans to beat the odds and play in the major leagues, Hudson said.

One time when Barfield was a boy, Hudson caught him practicing his signature.

Unlike so many young ball players, Barfield's baseball dreams went beyond high school.

Barfield went to play for a community college team in Missouri after graduating from Pine Bluff, and then he went to Oklahoma City University.

In the 1986 draft, the Pine Bluff pitcher went to the Texas Rangers in the 11th round.

Barfield moved up to the major leagues in 1989 and pitched three seasons with the Rangers.

On the mound, Barfield was a fierce competitor, especially compared to his off-the-field self, Hudson said.

"He was a force to be reckoned with when he was out there," she said.

Bock said success never went to Barfield's head. Bock remembers the time Barfield introduced him to future Hall of Fame pitcher Nolan Ryan while the Texas Rangers were on the road.

Barfield enjoyed being on the Rangers squad to see Ryan throw his sixth and seventh no-hitters and earn his 300th win, Gross said.

Barfield always loved being around people and always made sure to sign an autograph for a young fan.

Hudson said her brother was also known to teach kids about the game.

Gross remembers when Barfield helped out with a baseball camp in 1989, teaching kids in the Pine Bluff community.

Only a tiny fraction of players make it to the pros, Gross said, so it was special that Barfield got to continue to play past high school.

Hudson said Barfield, despite his professional success, was still proud of his state championship, as are the other players on the 1983 team.

From the messages she's received since his death, Hudson knows her brother left a legacy and had an impact on all the people who knew him.

"We will always be proud of him," she said.