Trucking tops list in 2015 in workplace deaths; 745 tally is a decline 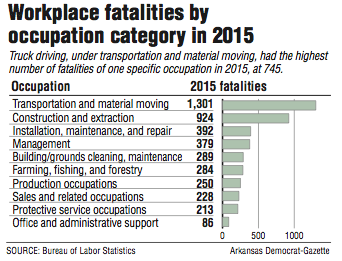 A graph showing workplace fatalities by occupation category in 2015.

Truck driving had the highest number of workplace fatalities in 2015 at 745, within the national total of workplace deaths of 4,836, according to recently released data by the Bureau of Labor Statistics.

"Any event is one too many," said David O'Neal, director of safety services at the Arkansas Trucking Association, but he cautioned that this is "a raw number without any context."

"To call it out and say it's the most dangerous occupation in America is a misleading statistic without anything else behind it," he said. "It doesn't account for any increase in total miles driven, and it doesn't give any indication of fault."

The number is down slightly from 2014, when there were 761 truck driver fatalities.

According to the U.S. Department of Transportation, since November 2011 the total number of vehicle miles traveled has risen steadily from under 3 trillion to 3.2 trillion miles in Sept. 2016.

O'Neal cited a Federal Motor Carrier Safety Administration findings that large trucks have an overall crash rate that is 28 percent lower than than that of other vehicles, and that between 1980 and 2014, the number of crashes involving large trucks dropped 32 percent.

"From an exposure standpoint, the actual rate is much, much, much smaller," he said, pointing out that there are about 3.5 million truck drivers on the roads.

"I don't think four-wheelers really have an awareness of what visibility a commercial truck driver has," he said. "Even with modern technology and everything else there are still blind spots around the truck. When a truck driver tries to change a lane, it's an accident waiting to happen. [Drivers] can't always be absolutely 100 percent sure it's clear."

He highlighted the Arkansas Trucking Association's Share the Road program that combats this. Drivers on the road team visit classrooms and hold events to teach safety around big trucks, and sit people in a driver's seat to show them the blind spots.

"I would like to see it made mandatory that anyone who gets a license has to watch a video of what a truck driver sees in his or her vehicle," Hilton said.

Lane Kidd, former president of the Arkansas Trucking Association and managing director of the Trucking Alliance in Washington, D.C., pointed to the role of driver fatigue in crashes and asserted that the mandated use of electronic logs beginning in December 2̶0̶1̶5̶ 2017* should help alleviate this.

"We have to do more as an industry to make sure that our truck drivers are rested adequately and are not pressured to exceed the maximum number of hours that the federal government allows. These e-logs will help prevent this," he said.

The Federal Motor Carrier Safety Administration estimates that 7 percent of large truck crashes are due to fatigue.

Kidd also said that distracted driving may play a role.

"We do know that large trucks are less prone to be in accidents than automobile drivers," he said. "Many times the automobile drivers' actions contribute to the accident, and distracted driving is a big problem for motorists."

According to the National Highway Traffic Safety Association, 8.8 percent more motor vehicle fatalities involved distraction in 2015 than 2014, the fastest growing category, and almost triple the rate of alcohol-related deaths.

*CORRECTION: Mandated use of electronic logs in commercial vehicles begins in December 2017. This story had the wrong date.

Print Headline: Trucking tops in '15 in workplace deaths; 745 tally is a decline