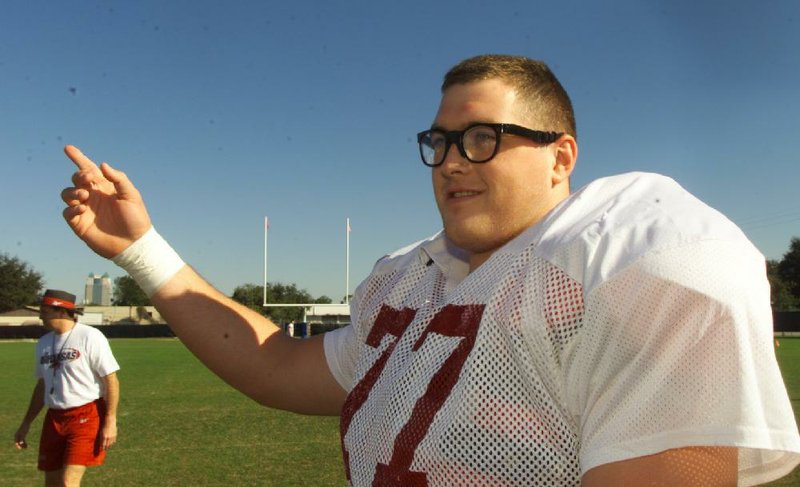 Brandon Burlsworth, photographed in Florida in 1998, is portrayed in Greater, a movie Wal-Mart is promoting. Burlsworth died in 1999.

Reindl said McMillon loved it and, nearly a year later, the Bentonville-based retailer is throwing some of its marketing muscle behind the film as it is released on DVD nationwide today.

"For one reason or another, we have been chosen as kind of a golden child," said Reindl, the film's co-writer and producer. "And we are very happy about it, very excited about it."

Greater, which Reindl co-wrote with director and fellow UA graduate David Hunt, has been promoted across multiple Wal-Mart platforms over the past several days.

Wal-Mart offered exclusive digital access to the movie before today's DVD release date through Vudu, the video streaming platform the company acquired in March 2010. Vudu subscribers received an email about the film's early availability, which could be purchased for streaming for $9.99.

Wal-Mart also organized a DVD release celebration held in the University of Arkansas' indoor football practice facility last Thursday. Reindl attended along with Burlsworth's brother Marty, and Chris Severio, who played the lineman in the film. All three participated in a Facebook Live event the same day, which also featured a brief appearance from actor and producer Neal McDonough.

"They want to sell DVDs. But I think more importantly they want to tell Brandon's story and what a good story it is and what an inspiring story it is," Marty Burlsworth said of Wal-Mart's interest.

Burlsworth was a walk-on at Arkansas whose work ethic helped him become an All-American offensive guard during his college career. He was selected by the Indianapolis Colts in the third round of the 1999 NFL Draft, but died in a car wreck 11 days later near his hometown of Harrison.

The story reached the big screen because of Reindl, who was inspired to do the movie despite having no previous experience writing or producing films. He received permission from the Burlsworth family in January 2005 and the process took nearly 12 years.

Reindl told the Arkansas Democrat-Gazette earlier this year he spent "several million dollars" financing Greater, which opened in about 400 theaters in 20 states in August. The movie just wrapped up its final run in theaters and grossed about $2 million, according to box-office reporting service BoxOfficeMojo.com.

Reindl estimated about 250,000 watched the movie in theaters, but expects the film to reach a much larger audience through DVD sales and the growing number of streaming services.

He said Wal-Mart has gone out of its way to help by putting together a marketing campaign to help promote the film.

"It's not something they do a lot, but I think it touched a lot of people here locally," Reindl said. "We were just a little movie with just a little bit of advertising money compared to the big boys, but people really responded."

A Wal-Mart spokesman said the company will often have "different amplification for movies," but added "this one is special due to the local tie."

"Walmart is always looking to support the local communities in which it operates, and Greater gave us an opportunity to support a great film set and produced in our home state of Arkansas," the spokesman said in an email.

Greater was shot in Fayetteville, Little Rock and Harrison in the summer of 2013. James Johnson, a former Arkansas football player who works in marketing at Wal-Mart, had a minor role in the film and hosted the retailer's Facebook Live event promoting Greater last week.

Martin Thoma, co-founder and principal of the Little Rock brand-development firm Thoma Thoma, said Wal-Mart is a global company so there is another attraction as well.

"The more powerful driver is probably the connection of Brandon's story with the Wal-Mart culture, values and brand," Thoma said in an email. "The story of an inspiring young man, his spirit and his legacy resonates with the values of the company -- a great American success story of Sam Walton guiding a little discounter to the world's largest retailer. Wal-Mart may be eager to play up those organic connections between the movie and its brand."

While Wal-Mart doesn't have a stake in the movie, the retailer does have a partnership with the Harrison-based Burlsworth Foundation. The foundation, which was started by Marty Burlsworth after his brother's death, offers free vision exams and glasses to low-income, uninsured children in Arkansas through its "Eyes of a Champion" program.

Wal-Mart did not respond to more questions regarding its marketing efforts around Greater, but Reindl said he also screened the film for the company's chief marketing officer, Tony Rogers. According to Reindl, Rogers called Vudu and it eventually led to the weeklong exclusive access before the DVD release.

The movie should have plenty of visibility in Wal-Mart stores beginning today after being distributed across the U.S. Reindl said there will be a cardboard cutout display case in some stores and video advertisements promoting the DVD.

Reindl said clips from Greater will play on televisions in the electronics section after Christmas as well.

"If we are a big success, a lot of it is going to be attributed to Wal-Mart when it comes to this home video side," Reindl said. "They've gotten behind us in a really big way."