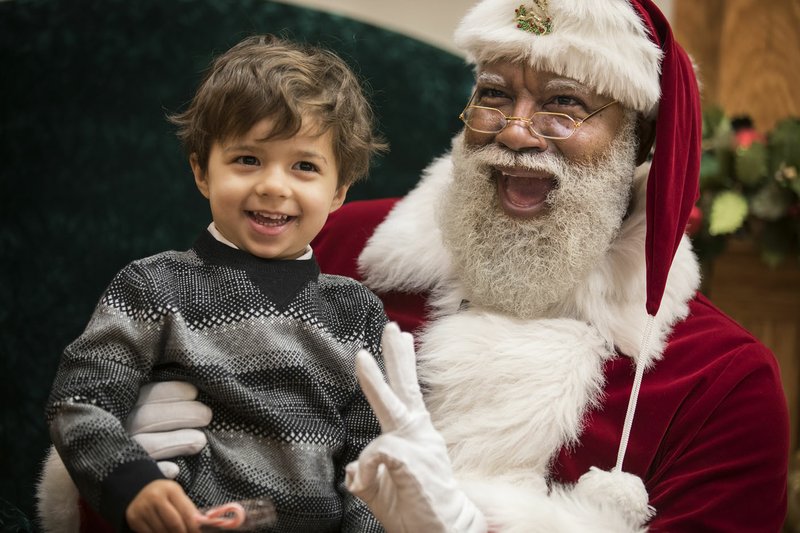 Larry Jefferson, playing the role of Santa, smiles with Jack Kivel, of Prior Lake, for photos Dec. 1 at the Santa Experience at Mall of America in Bloomington, Minn.

The man who came to be known around the nation as Black Santa after serving this month as the Mall of America's first black Santa Claus got his Old Saint Nicholas start in his native state of Arkansas.

Never previously in the 24-year history of America's largest mall, in Bloomington, Minn., had a black man donned the red suit. But Larry Jefferson did for several days of people's picture-taking and Christmas wishing.

His appearance went viral online, and he had his story picked up by media outlets worldwide, ranging from National Public Radio and CBS News to the British Broadcasting Corp.

Jefferson's Santa days began decades ago in Nashville, in Howard County, where he grew up with 10 siblings, he said. At 11 years old, he was recruited by his father to take on the Santa role for his family, and it became a tradition that has stuck with him.

"It was a great little town, a small town, with about 3,500 people. I was in a class of about 120," Jefferson recalled. "There were great people with a great spirit who were just working hard to try and put their kids through school."

Jefferson graduated from Henderson State University in Arkadelphia and joined the Army, retiring from the Army Reserve after serving 30 years. During his service, which included tours in Saudi Arabia during the Persian Gulf War in the early 1990s, and in Kuwait and Afghanistan from 2012-13, Jefferson played Santa or organized holiday parties for every unit he was in, he said.

In Dallas, where he lives now, he has continued his Santa service for children in his community.

Jefferson's latest Santa fame began in July when he attended a weeklong Santa Claus convention in Branson, along with about 1,000 other Santa Clauses, Mrs. Clauses and Santa's helpers. Red-suit vendors set up their booths, Santa trainers were on hand, and mall photographers from across the nation set out to recruit prospective Santas.

"It's not the beard. It's not the body. It's not the red suit. It's what's in your heart when you're taking these children day in, day out," said Tim "Santa Tim" Connaghan, the convention's organizer and director of the School4Santas. "You've got to really take in that persona and have the twinkle and have that joy, and you have to continue that magic and the legend."

Himself a 47-year Santa veteran, Connaghan has trained more than 3,300 Santas and Mrs. Clauses, and authored the book Behind the Red Suit -- The Business of Santa Claus. Like Jefferson, Connaghan also played Santa in the military. When he was serving in Vietnam, he applied a shaving-cream beard to distribute gifts to his comrades, he said.

Lately, he said, pressure has been put on the mall Santa industry to hire a diverse crew of Santas to better reflect the communities they serve. The challenge is finding members of ethnic groups who are willing to play Santas.

"We're not discriminating. If we can find them, we'll hire them," he said.

For Landon Luther, who co-owns the Santa photo studio at Mall of America, the convention was a Where's Waldo in finding an ethnic Santa. Jefferson was the only black Santa at the convention, he said, and before long Luther had booked Jefferson for a few days of photo shoots in December.

For each of those days, Jefferson said, he was booked solid. People traveled from as far away as Arizona and Kentucky for photo shoots with him.

"I had a child who said, 'Santa, you're brown.' And I said, 'yes I am, and Santa comes in many different colors,'" Jefferson said. "I've had that happen about two or three times. Kids are kids, and they just see Santa as Santa."

Jefferson also saw some tears from elderly women "who just wanted to come and get their pictures with me. They were like, 'It's about time,'" he said.

Jefferson still has ties with his home state. He makes periodic trips to visit family and to serve on Henderson State University's alumni board and on his fraternity's board.

"I always try to leave one day open so I can run to my hometown, visit Nashville, Texarkana and Hope, and then zip back to Dallas," he said.

"If Little Rock were to set something up for me to come there, I would do that also. If not this year, then next year," he said.