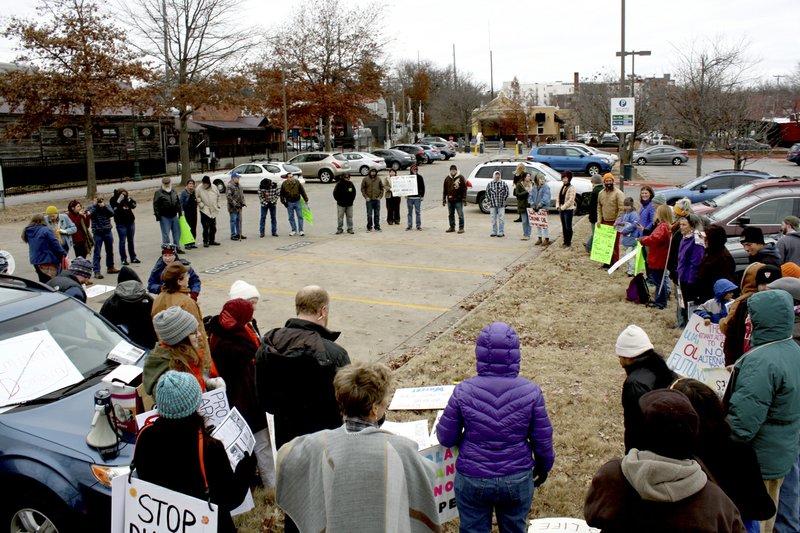 FAYETTEVILLE -- A planned oil pipeline stretching 440 miles from Cushing, Okla., to Memphis, Tenn., is a threat to Arkansas' water resources, protected species and historic sites, according to an advocacy group opposed to its construction.

More than 50 people, from the very young to the elderly, trekked Dickson Street from the Walton Arts Center to the Washington County Courthouse to protest construction of the Diamond Pipeline. Protesters carried signs reading "our water, our future" and "water is life."

The Natrual State Water Guardians will hold a music fundraiser aimed at helping to halt the Diamond Pipeline. The event starts at 1 p.m. Saturday at Nomads Music Lounge, 1431 S. School Ave. in Fayetteville.

"This pipeline crosses five major rivers and will affect 11 of our watersheds," said Jessica Brown, a chapter leader with the Natural State Water Guardians. "We have to stand up and fight this pipeline."

Diamond Pipeline is a joint venture between Plains All American Pipeline and Valero Energy Corp. to move oil from Cushing to Valero's refinery in Memphis.

The 20-inch pipeline will run across north-central Arkansas, crossing 14 counties, and will move crude oil from shale formations in Texas and North Dakota. Construction of the pipeline is to start this year and finish in 2017.

Diamond Pipeline has touted the project as a way to enhance local economies along the pipeline's route and secure longterm production of of gasoline, diesel and jet fuel for greater Memphis and eastern Arkansas, according to its website.

Diamond Pipeline received approval from the Arkansas Public Service Commission in August to build across five waterways in the state, including the Arkansas and Mississippi rivers.

The Corps of Engineers' Little Rock district examined 491 water crossings on the pipeline's route and approved permits for 443 of them in May. The other crossings either didn't need a permit, or the agency didn't have jurisdiction over them.

Protesters on Saturday chastised Plains All American for past oil spills. The company came under scrutiny when one of its pipelines burst in 2015, sending thousands of gallons of crude into the Pacific Ocean.

"(The company) doesn't have a good track record," said Quinn Montana, a doctoral student at the University of Arkansas and self-described water guardian. "It may be a long and protracted fight, but we're ready."

Diamond Pipeline has repeatedly emphasized reliability and safety of its pipeline. The company said it will use horizontal drilling to place the pipe under water crossings.

Horizontal drilling is done by angling the pipeline gradually beneath the river and pushing it across. By doing this, the ends of the pipeline are away from the riverbank and at least 35 feet below the deepest part of the river or creek, Brad Leone, a spokesman for Plains All American, said.

Alongside the threat of a spill, activists fear the permitting process undermines democracy.

Earl Hatley, an environmental activist from Oklahoma, said some pipelines are permitted without public comment or environmental impact studies.

The Diamond Pipeline project stalled when Clarksville Light and Water Co. opposed the pipeline's proposed route. The city utility provides drinking water to about 28,000 people in Clarksville and surrounding areas.

The decision followed a multimillion-dollar deal between the utility and Diamond Pipeline requiring the company to protect drinking water sources. Under the agreement, Diamond Pipeline will provide $6.6 million to pay for an extension of a pipe that feeds a water-intake facility on Spadra Creek in Johnson County, locating it north of the pipeline's proposed path.

If that pipe extension isn't approved by regulatory agencies, the money will be increased to $8 million to construct a water-treatment facility on Spadra Creek.

If built, the water-treatment facility will be placed north of the pipeline's path so, if there is an oil spill, the crude will move south with the flow of water and away from the treatment plant.

Diamond Pipeline also will be required to have other safety measures in place, such as a boom -- a floating barrier used to contain oil spills -- on site at the Piney Bay Intake Facility that can be used if there's a leak.

As part of its agreement with Diamond Pipeline, Clarksville Light and Water withdrew its petition to intervene in the pipeline's permit hearing with the Public Service Commission.

But for Brown, the consequences of an oil spill are still too much to bear.